I wear "barefoot" shoes such as Vibram FiveFingers when I need to wear shoes. I'm no longer accustomed to walking in regular shoes, which require the heel-to-toe motion. My transition to this was because of a bad knee (walking heel to toe causes pain in my knee). Because of this, I'm almost certain I can't backpack in regular shoes.

I was wondering how Vibram FiveFingers were viewed in European countries. Would I stand out and would it be odd for me to wear there?

You'd stand out, yes, in that they look unusual. Yes, it'd be odd. But it's also odd (in the "not normal" sense) to wear them in the US, Canada, New Zealand or anywhere for that matter, just because having toes is unusual on shoes (assuming you're talking about the five finger shoes). 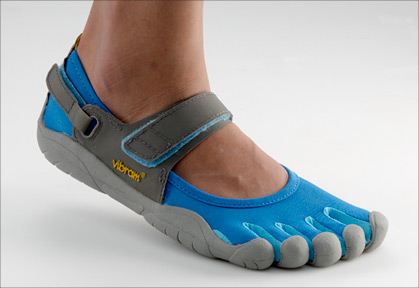 However, I have friends with them in the UK, and they've worn them in Europe many times. So what if they're a bit strange - it just becomes a talking point, and a way to make friends :)

In fact, at the Prague marathon we chatted to a guy who was on his 97th marathon, the last 7 of which he'd run in Vibrams like the ones above. He stood out if you were looking at feet, but hey, it worked for him and he claimed he'd never go back.

I am one of Mark Mayos friends he mentioned above who wears them. Yes I get stopped by (often odd) strangers who 'want to get some' surprisingly often, but no more so in mainland Europe compared to anywhere else in the world (UK, New Zealand, US).

One plus, airport security is easy with them on as they never ask for me to take them off.

One thing is my wife often says I look more like a tourist in them which can sometimes be a pain... but TBH that isn't really helped by the fact I carry a big camera everywhere (I'm doing the daily photo thing via blipfoto.com) and like most kiwis I almost always have sunglasses on the top of my head.

It is as unusual there as it is in the USA, just like Mark Mayo mentioned. However in Germany there are many public barefoot parks. I'm sure you would not be out of place there.

They are certainly far from being mainstream in Europe, but I definitely saw quite a few people wearing them in London. As long as you are not planning to attend any business or black tie type of events, I think you shouldn't worry about it and just wear whatever is comfortable.

Not the answer you're looking for? Browse other questions tagged europe or ask your own question.