But does changing latitude affect sleeping? For example, does flying from Sydney to Tokyo, when the former is in winter, and the latter is in summer, have any affect on sleeping? If so, is there a term for it?

If you travel far enough poleward during summer, you reach the land of the Midnight Sun. That certainly messes up sleep for many people. Although days are not exactly short in the UK or Germany in June or July, it not getting dark at all is a different story algother.

I live in the far north and spent a month in the USA in May. I didn't suffer from jetlag much when I travelled westward, but when I travelled eastward again early June, the complete lack of a night (the Sun set again 3 days ago for the first time since May) was certainly a complicating factor, considering that this was the view from my bedroom at 0:15 the night after I got back. 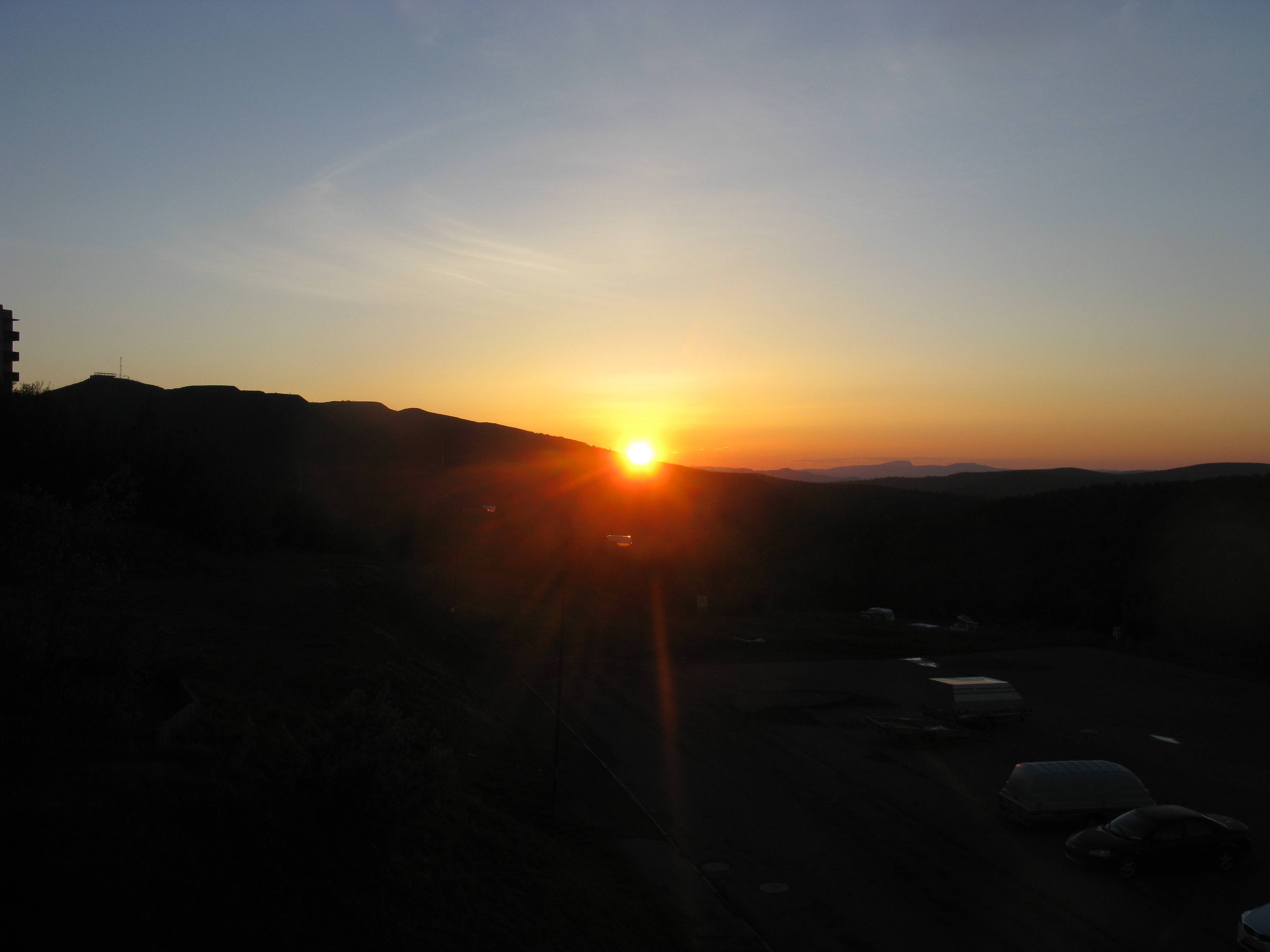 About.com is the only site I've ever seen to claim that long north-south flights get the same symptoms as jetlag experienced on other time-zone crossing flights.

Everywhere else, you'll hear that it happens changing timezones only.

Indeed, it's more likely that the long north-south ones are just 'tired' from the long flight, perhaps not sleeping, and the long journey, in the same way that you're tired after a long car ride.

However, having changed seasons mid-winter or mid-summer a few times, I can mention that:

from London to South Africa, and back, London to NZ and back several times, and between the US/Canada and NZ, I certainly noticed the daylight hours. And I suppose this would be a bit of a psychological shock the higher your latitude and the stage of the season. Going from 16 hours of daylight to 6 can be quite distressing, and I even found my first week mid-summer in the UK to be disconcerting with the crazy long evenings.

Between London and NZ you definitely get jetlag. Brutal if flying east. However between the US and Aus, hardly anything, and overnight from London to South Africa and back, I didn't notice anything.

But a word for it? Probably just 'tiredness' :)

So I assume you're talking about the day, or week following travel - however, it's worth noting that science has indeed found a link between latitude and how it affects your sleep.

“People who live near the Equator have a greater tendency to be early risers and to sleep earlier. Closer to the poles, individuals become more vespertine (rising later and going to sleep later),” said Mario Pedrazzoli, professor in the Universidade de São Paulo (USP) School of Arts, Sciences and Humanities

It has never happened to me. Longest I have traveled is probably Detroit to Tampa Bay. Think of it this way, because you are still in the same time zone and the only activity you have done is travel (though there is an hours difference between the time zones of Sydney and Tokyo) which doesn't affect sleeping pattern.

Not the answer you're looking for? Browse other questions tagged sleeping or ask your own question.

6
Is it a good idea to keep your home timezone sleeping pattern when traveling to a far timezone?
24
Where to sleep at Frankfurt airport
9
Finding sleepover spots in internet cafes in Japan?
30
How to sleep in twins beds that are pushed together?
41
How does one sleep in a sleeper train in Europe?
5
Cheapest way to sleep in central Tokyo?
8
Does Siesta time in Panama affect business travelers?
22
Good movie/cinema theaters in Manhattan for sleeping through a movie?
19
Can I sleep overnight at Stansted Airport?