What are the drawbacks of taking this window/aisle solo seat - 71A on Boeing 777-300ER?

I've got an LA to Hong Kong flight coming up and I've never flown for that long before. Flying on boeing 777-300ER. Btw I'm not asking about window vs aisle, I definitely want an aisle seat. However it appears 71A is both window and aisle. This is the basis for my inquiry, to confirm that the window addition only adds benefit to the situation and does not take away from the aisle characteristics.

I'm looking for an aisle seat so 1) I can stretch my legs out 2) get to the bathroom and 3) walk around if I need to 4) minimize exposure to loud noise (engines/machines) or bad smell. Right now I have seat 69G, it's in the aisle and could possibly be bumped into by people walking by. But it works for all criteria I mentioned.

Having a window view would be an added bonus, would seat 71A have any extra exposure to loud noise or bad smell? It is closer to a bathroom, do bathrooms smell on long haul flights?

SeatGuru says "seats in close proximity to a bathroom can be bothersome," what are the common bothersome issues people express due to sitting by a bathroom? 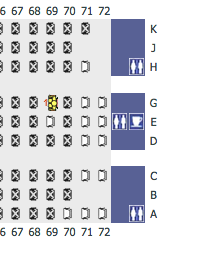 It almost seems like I'd be able to get the same benefits I want from an aisle seat but also the view?

Would sound be louder in this window seat?

I think the diagram you posted is misleading, I am a qualified cabin crew for 777-300 and all other variations of 777, the last seat in the diagram shows an empty space in the middle which I think is not correct. Out of experience these seats which are located at the end of the aircraft next to the L5 door (71+72 A+C) have limited space due to the shape of the aircraft as it becomes narrower at the aft of the aircraft, hence they make them two seats only instead of three, same thing also happens in 747s. Here is a diagram to show you what I mean: 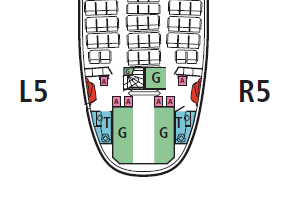 Please note: seat layout and numbering is totally different from one airline to another, so I am talking out of experience since I am not familiar with the specific airline's layout and seat numbering.

(Yes, this is late (he's presumably been to Hong Kong and back by now) but it popped up in the sidebar and no one explained "why")

The difference between this:

Is that the first one came from your carrier's online booking system and it has to:

To accomplish all the above, these seating plans are usually implemented as tables which means the rows and columns have to line up, just like a spreadsheet.

The second picture is not interactive and is a very accurate representation of the seat locations.

Rows 71 and 72 are 2-3-2 rows instead of 3-3-3 rows. The aircraft is getting a lot narrower back there and the airlines ran out of squeeze space.

Advantages of those rows (if you have a window seat) is you are not pushed up against the window - there is space for your bag between the seat and the wall.

Disadvantages of those rows are you may not have any recline - the seat may hit the wall. And the aisle has no more legroom than a middle seat as it is basically in the middle of the row in front of it. The aisle itself cuts through the space where the 3rd seat would normally be.

And as most airlines serve meals front to back, you will probably be left with the "Would you like fish, or fish?" choice. Cold.

With apologies to the cabin crew here, the back rows are usually the nastiest ones on the flight. Unless, of course, the bulkhead row has 3 fussy babies in it.

I am not convinced "seats in close proximity to a bathroom can be bothersome," is entirely a matter of opinion and since not answered above offer some reasons. I suppose these may not bother some people but I do see a difference between seats close to a toilet and those not, regardless of whether an individual's assessment of these is favourable or adverse.

Smell is definitely one, though by no means on all flights. I’ve known one plane delayed while cleaners were brought back on board.

There is more activity and irregular noise, so distracting for anyone trying to concentrate or sleep.

There will usually be crowding at times, so perhaps then difficult to access the overhead storage (of which there may be less anyway).

Congestion might also lead to the odd nudge of aisle passengers and also prevent them stretching their legs into the aisle.

The toilets may form a bulkhead such that the row of seats immediately adjacent and facing the bulkhead does not have any space underneath a row in front. There may be some compensation from not have a seat back reclining into one (specially at meal times for large people) etc but for a tall person even the few extra inches that a bulkhead row might offer may not, on a long flight, compensate for the reduced legroom.

On board entertainment may be less 'personal' (no screen on the back of a seat in front) and a platform for meal trays may be less convenient to set up and take down. Some aircraft (including the Cathay Pacific 777-300ER in this question) do offer personal entertainment screens in some or all bulkhead seats, but these are usually either mounted to the bulkhead or fold out from a compartment in the armrest. In cases where a flight attendant jump seat is mounted on the bulkhead, though, personal entertainment screens are less likely to be present.

In the particular case of 71A on a Cathay Pacific 777-300ER, the seat is close to the aft lavatories, but it is in front of the lavs rather than behind them, so it's not a bulkhead seat.

Not the answer you're looking for? Browse other questions tagged aircraft seating or ask your own question.

6
Will she be able to fit in the Philippine Airline Boeing 777-300er seat comfortably?
12
What are the best seat places to choose inside an international flight for economy class?
2
What are seats 69H/K like on 777-300ER on Philipines Airlines?
7
Where are the screens for the Prestige class bassinet seats on Korean Air Boeing 777-300ER?
0
Seat pitch / leg room on EVA Air SEA - TPE - KUL?
7
Do the seat rows across the aisle from the Cathay Pacific 777 300 ER 77H aircraft line up?