Is it okay to board only the second flight of a return ticket? The return ticket is much cheaper than buying one way

I was browsing flight price at Singapore Airlines website, and a one-way flight from SIN to SFO cost this much: 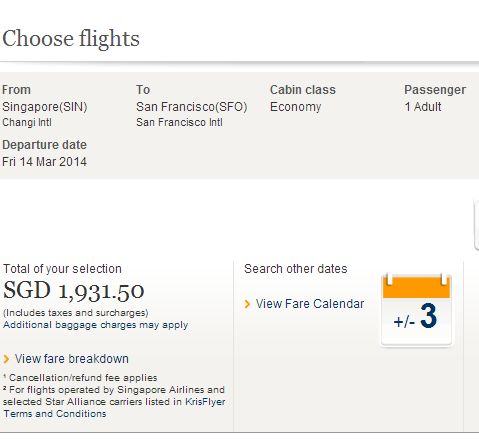 That's quite expensive. I tried browsing around and found that a return flight from SFO to SIN and back to SFO cost much cheaper: 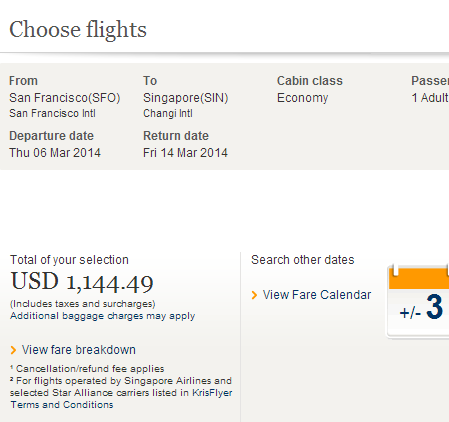 It's really weird because the second ticket includes the exact same flight that cost 1900+, but it's almost half the price. The reason for this counter-intuitive situation is explained in the answers this question One-way versus return airfare tickets

If I am located in Singapore and my intention is to fly one-way to SFO, is it safe to book the flight in the second picture and only board SFO-SIN leg? Will they deny me because I miss the SIN-SFO flight?

First off, no it is not safe to discard the first leg. If you buy a return (or any multi leg) ticket, missing the first flight on it (or any interim flights if there are more than one) will void the remaining flight(s) on the ticket.

As for why the one-way ticket is more expensive, that has already been answered in detail here: One-way versus return airfare tickets

No your idea won’t work this way. Practically all airlines will have some kind of disclaimer in their terms and conditions that state that you must use the legs of the journey in their intended order. For example Singapore Airlines:

(a) Carrier will honour flight coupons, or in the case of an electronic ticket, an electronic coupon, only in sequence from the place of departure as shown on the ticket.

(b) The ticket may not be valid and Carrier may not honour the passenger’s ticket if the first flight coupon, or in the case of an electronic ticket, an electronic coupon, for international travel has not been used and the passenger commences his journey at any stopover or agreed stopping place.

(e) If the passenger fails or has failed to use the flight coupons, or in the case of an electronic ticket, the electronic coupon, in sequence, Carrier is entitled to recompute the fares in accordance with Carrier’s Regulations for the use of said coupons and the passenger is liable to pay to Carrier any difference between the recomputed fares and the fares already paid by or due from the passenger.

If I continued searching, I would find something along these lines int the terms and conditions of all major carriers.

It is well-known that one-way tickets are much more expensive than return tickets. The idea is that people booking one-way will probably be somewhat desperate or sitting on a bag of money or whatever; in any case, they obviously sell so airlines have no reason to rejudge.

Instead, the typically applied countermeasure by price-sensitive customers is to buy a return ticket in such a way that the return flight is forfeited. In your case, you want to go SIN–SFO. You should search for return tickets SIN–SFO–SIN. These should still be cheaper than single fares SIN–SFO. You still forfeit one leg, but that will just count as ‘no-show’ and typically have no negative consequences (because it’s the return one).

In general, if you find a way to pay less, the airline won't let you. In particular, if a return cheaper than a single you can bet then the airline will prevent you from using a return as a single if it possibly can.

This depends on the ticket rules. Usually, the rules depend on the airline. Usually, “traditional” airlines sell there-and-back tickets, where a return costs a lot less than two singles (sometimes less than one single), and you must use all the segments in sequence: if you don't take the first flight, then the airline will cancel the ticket (examples: British Airways, Singapore Airlines). Usually, low-cost airlines sell independent tickets, where a return is just two singles (and priced as such), and in that case you can use the return if you missed the first flight (examples: Easyjet, Ryanair, Wizzair). Note usually — there are plenty of exceptions, you need to check on a case-by-case basis.

Airlines set prices based on yield management, not on cost. If there's an apparent way to bypass yield management, then usually the airline is wise to it and has made a rule to forbid it. For example, if an airline has noticed that only a few rich travelers do complex travel involving one-way flights, then they'll make single tickets very expensive. If they do that, you can bet that they'll try forbid anything that allows people to book a return ticket and only use half of it. Technically, using the first part of the ticket but not the second one may be a breach of contract — but the most the airline can do if you miss the second part is to cancel the ticket which you're no longer using anyway. But if you try to use the second part without the first, the airline will cancel the ticket before you use the second part. Airlines also sometimes decide that people from A are richer than people from B and so sell A–B–A for more than B–A–B. Again they arrange to prevent people from A from using the cheaper fare. (Sometimes if you fly the route multiple times you can get one A–B–A ticket for the first flight and for the last return, and B–A–B tickets for intermediate flights, but this is often difficult because you need to know the dates long in advance.) The same kind of reasoning explains why a ticket with a changeover A–B–C is sometimes cheaper than A—B (people from C are poorer, or there's more competition for A–C than for A–B) — and again the airline won't let you take the return flights if you haven't gone all the way to C.

Low-cost airlines often do their yield management differently, on a strictly per-flight basis. If the airline prices A–B–A as A–B plus B–A then it has no incentive to tie the second flight to the first.

In summary, if there's a “nonstandard” way to get a cheaper price, you can bet the airline has thought of it and has arranged to forbid it.

9
Can I get a cheaper one-way flight by booking and cancelling a flexible return leg for a refund?
4
I need to book a round-trip ticket and a one-way ticket on the same flight?
8
One-way flight much more expensive than double-way: what is the official airlines' explanation?
1
Is there a best practice for buying a return ticket that will be used only for inbound or outbound travel?
5
How can I find out whether skipping the first flight in a booking will void the return?
2
Under what circumstances can one hope to get to use their return flight without using the forward flight?