Do I need both a UK visa and a Schengen visa?

I am a Filipino Citizen working in Qatar and have a valid Residence Permit. I am planning to visit my wife's sister in the UK, and afterwards we are planning a Schengen tour with the other family member living in the UK. Do I need to get two visas which is a UK Visa from UK embassy (my point of entry) and at the same time another visa which is a Schengen visa from the France's embassy?

Yes, you do need two visas, since the UK and Schengen have separate immigration arrangements.

While the United Kingdom is a member of the European Union, it is not a member of the Schengen area, nor is it subject to the Schengen Visa policy. The UK is part of the Common Travel Area with the Republic of Ireland, however travellers should be aware that while immigration controls are not ususally in place between RoI and the UK, holding a visa for one of these states does not necessarily permite a visitor to enter the other. The below (slightly complicated) image indicates various overlapping European insititutions, some of which (Schengen, Eurozone, CTA, Customs Area) are relevant to travellers: 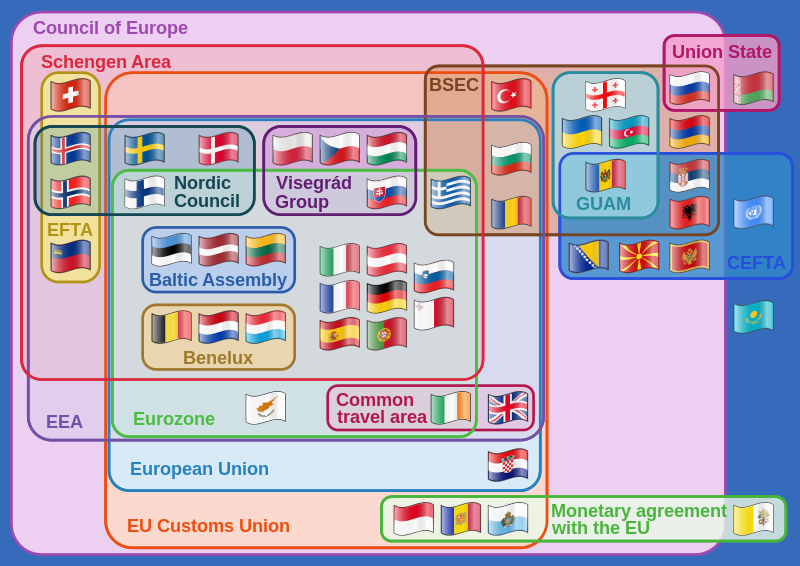 Given that the UK is not a part of Schengen or bound by the visa policy, Schengen Visas do not count as leave to enter the UK. The UK's government website does provide a useful tool for checking if you need a visa (and if so, what sort). It does not cover all possible cases, but covers most common situations and exemptions that a traveller may have.

Not the answer you're looking for? Browse other questions tagged visas schengen uk filipino-citizens or ask your own question.

2
Can I travel to Spain on a UK visa? I am a Fillipino
0
UK Visa plus Schengen Visa
0
French work permit holder: visa required for a visit to the UK?

4
Re-visiting the UK alone with the EU national family visa
1
Spouse with Danish residence permit's proofs necessary to apply my tourist Schengen Visa?
6
Filipino citizen married to UK citizen, both US Green Card holders, traveling to France - visa needed?
0
How to apply for Schengen visa after expiration of residence permit?
8
Visa Family Permit
3
Do I need a visa to enter the UK?