It appears many of the big Russian rivers have passenger ships going along the river, in areas where roads and railways do not reach. What I have found so far:

It seems such boats could be a suitable way to connect from the Trans-Siberian railway to (even) more remote locations (such as the vicinity of Lake Vivi), where roads and railways do not reach. However, I find it difficult to find information about such boats, routes, schedules, etc.. Where can I find an overview, preferably a map, of long-distance boats in Russia? By long-distance boats I mean boats that run along the river for at least some dozens of kilometres, but preferably for several days, as opposed to ferries that simply cross the river from shore to shore.

Note that I'm looking for regular passenger ships, not special tourist cruises. Specifically, I'm looking for areas where travel by river is the only way of transportation, such as in the examples I've shown; there are no roads or railways in these areas. 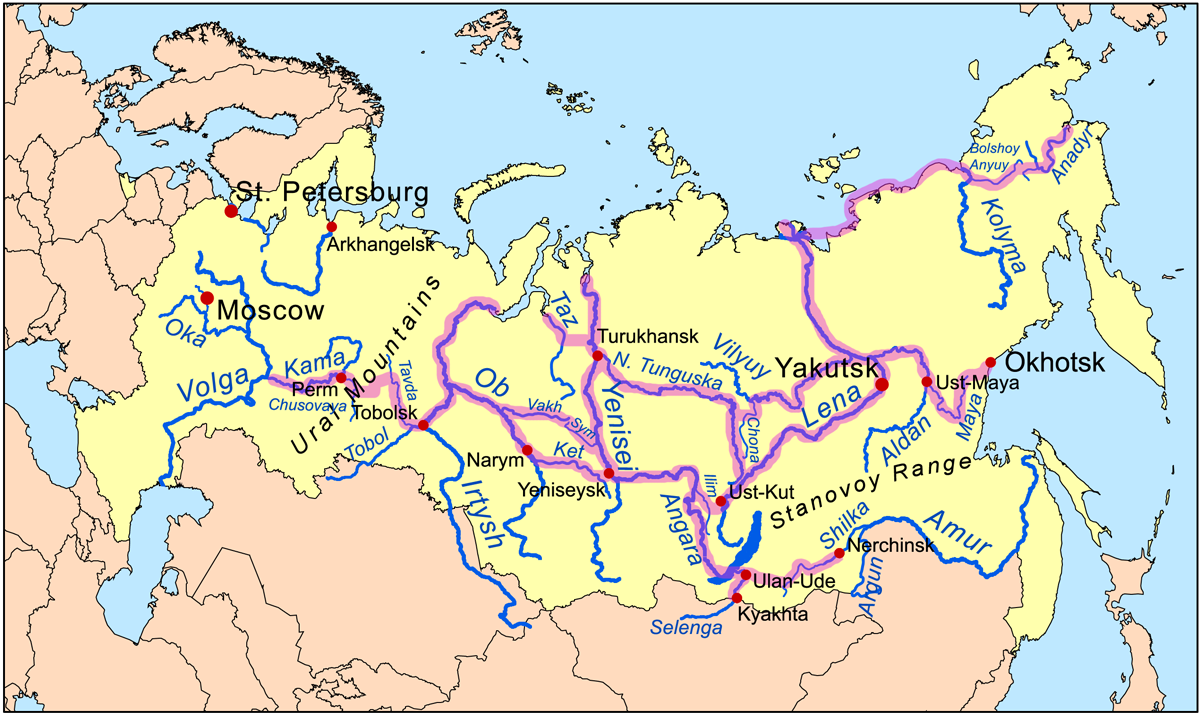 So, a map like this but with actually trafficated routes would be nice to see!

As far as I know there is no such super-site that covers all river routes, since there is no monopoly in river transportation in Russia (unlike train transportation like RZD.ru where you can find and book almost everything related to trains).

If you are looking for regular passenger ships then you should search on sites that belong to local river transportation companies. Usually those companies are situated in major cities on the route.
How to find those sites? Take start point and end point on the route and google it. There is however an inconvenience that you must use a translator, because many of these sites are simple static HTML's in Russian.

For example, for the route Krasnoyarsk-Dudinka, here is the site of the transportation company prt24

An overview of the river routes I was able to find:

On the Pechora river, the company RTK Komi has:

Openstreetmap also claims a car ferry to from Щельяюр to Нарьян Мар, but I can find no evidence this still exists and it appears there are roads there now, so this might have been withdrawn.

On the Yenisey river, the company PassazhirRechTrans has:

On the Lena River, the company Lenaturflot has:

In Western Siberia on the Ob River, Severflot and other rivers operates 36 lines, including:

Not the answer you're looking for? Browse other questions tagged russia ferries maps riverboats or ask your own question.

16
How does one get to Lake Vivi, at the geographical center in Russia?
10
What is the longest distance by car ferry?
8
Is there any limitation on foreign nationals travelling by passenger boat Omsk – Salekhard or Salekhard – Antipayuta?
5
Can I take a scheduled bus on an ice road?
6
What is the furthest north one can get without flying or taking special cruises?

20
Is this ferry-intensive journey along the Labrador coast that Google Maps proposes actually possible?
32
Is there a website/tool which can generate a reachability map from a given point?
8
Is there any limitation on foreign nationals travelling by passenger boat Omsk – Salekhard or Salekhard – Antipayuta?
6
What is the furthest north one can get without flying or taking special cruises?