Where to eat Suzumebachi (Giant Sparrow Bee) in Japan?

Today I've read a lot about the craziest insect in Japan, the Suzumebachi.
It's a kind of giant bee and, apparently, it's the most dangerous animal in Japan:

Being stung is extremely painful and requires hospital treatment. On average 40 people die every year of anaphylactic shock after having been stung, which makes the Japanese giant hornet the most lethal animal in Japan (bears kill zero to five people and venomous snakes kill five to ten people each year).

I've also read that there are places "in the mountain" where the Suzumebachi is served grilled but I couldn't find any precise information about this.
So my question is: where can I eat Suzumebachi in Fuji area or Iya Valley, Shikoku, area?
Feel free to suggest other places if it's unlikely I'm gonna find any in the aforementioned places.

Not quite -- the bees are not eaten, but it is possible to eat their larvae (はちのこ/蜂の子 hachinoko, lit. "bee children"). Here's the process of preparation documented in detail (in Japanese, but with pictures).

This is by no means a common dish (in fact I'd never heard of it before I started looking into this!), but apparently in the Tono region of Gifu prefecture, more specifically the towns of Ena and Nakatsugawa, it's considered a regional delicacy. The most famous dish is hebomeshi (ヘボめし), which is basically rice with bee larvae mixed in: 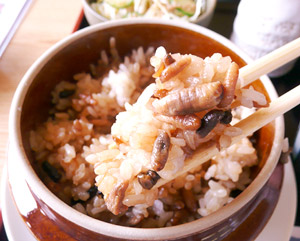 And there's a place called, appropriately enough, Hachinosu (はちのす, "Bee's Nest") that will serve you a full course of not only bee larvae rice but pickled grasshoppers (イナゴの佃煮 inago no tsukudani), raw horsemeat (馬刺し basashi) and more for ¥1800: 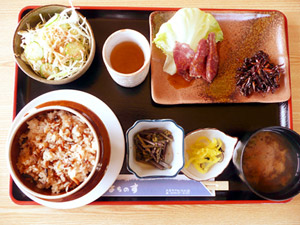 And an important disclaimer: while you'll certainly get bees there, they may not be giant sparrow bees. The only reference I could find to specifically giant sparrow bees being eaten was this rather dodgy TV show claiming that they're used for a dish called bee noodles (蜂そうめん hachi-somen) in the northern mountains of Miyazaki, Kyushu, but the only other references to this dish seem to be talking about the TV show...

We were up at Chichibu last weekend, and they were selling the Giant Sparrow Bees in a baby food jar in some kind of syrup and were told by the vendor that the stingers are removed and that the bees are Eaten after drinking the syrup. She demonstrated for us. They are supposedly food for building muscle and considered a delicacy

Not the answer you're looking for? Browse other questions tagged japan local-cuisine insects or ask your own question.

17
Where can I eat a guinea pig in Ecuador?
13
What are the typical meals in Japan?
9
Where to eat cheap authentic laksa in Kuala Lumpur?
20
Is there any region, island, mountain, or village in Japan known for hot spicy local cuisine?
10
Resource for local cuisines and specialties across Japan
13
Eating fish eye in Japan
23
Where can I eat dishes that feature in western countries' Chinese restaurants?
24
Where can I eat sushi with chocolate in it?
37
Where can I eat medieval food?