A lot of people I talk to, including Japanese and non-Japanese, claim that ryokans are expensive.

Once, when I discussed this further and said that some places that I've been to describe themselves as ryokans and aren't expensive, the other person speculated that maybe it's not a real ryokan, and doesn't offer the same services a "real" ryokan does.

I found this very plausible, and I joked that maybe just offering a futon on a tatami mat would be enough to fool me into thinking that it's Japanese-style accommodation.

Examples of inexpensive (at least to me) ryokans include Kumagai Ryokan in Morioka and Kimi ryokan in Ikebukuro.

I've heard of minshukus, but none of the places I've gone to have called themselves that.

I'm going to go against the flow and state that cheap "ryokan" are, indeed, inauthentic -- and there's in fact a very specific species of cheap budget hotel that labels itself "ryokan" precisely to attract foreign travellers, while being nothing of the sort. Kyoto has some egregious examples, eg. the "Backpackers' Ryokan" Budget Inn and its evil twin the "Capsule Ryokan":

The Japanese definition of a ryokan is actually really simple: it's an inn that serves you dinner in your own room, usually course by course with maids fluttering about in kimonos, and that dinner will be spectacular (and expensive). If the dinner is eaten together in a common dining room, it's a hotel or a minshuku (民宿), lit. "people's lodging"; and if they don't even offer dinner, then it's a doya (ドヤ) flophouse for day laborers, or its modern incarnation the backpacker hostel. (Obviously reality is not quite as sharply delimited as this; for example, quite a few non-high-end ryokan serve dinner in private cubicles within what's actually a cunningly disguised restaurant.) Nonetheless, those are the expected definitions of the terms, and seeing a ¥3000/night flophouse calling itself a ryokan is bit like seeing a Motel 8 rebrand itself as the Palace Deluxe Grand Hotel -- the new nameplate won't fool anybody who checks in for long.

The difference between the three may seem small, and you're probably wondering why not just book a cheap place and go out for a nice dinner then, but the idea is that the ryokan itself is the experience: you and yours stay inside from check-in to check-out, enjoying the food, the baths, the art and the tranquility. A minshuku is a more social experience, with people eating and chatting together, and a doya/hostel is just a place to crash for the night. 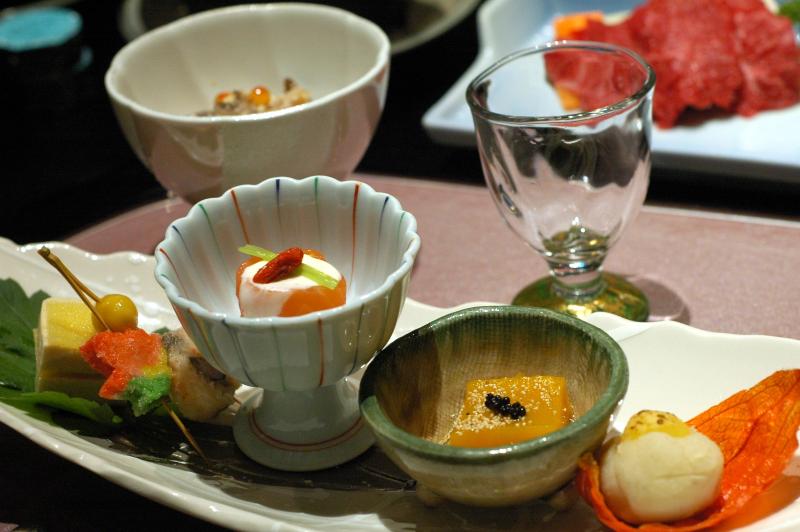 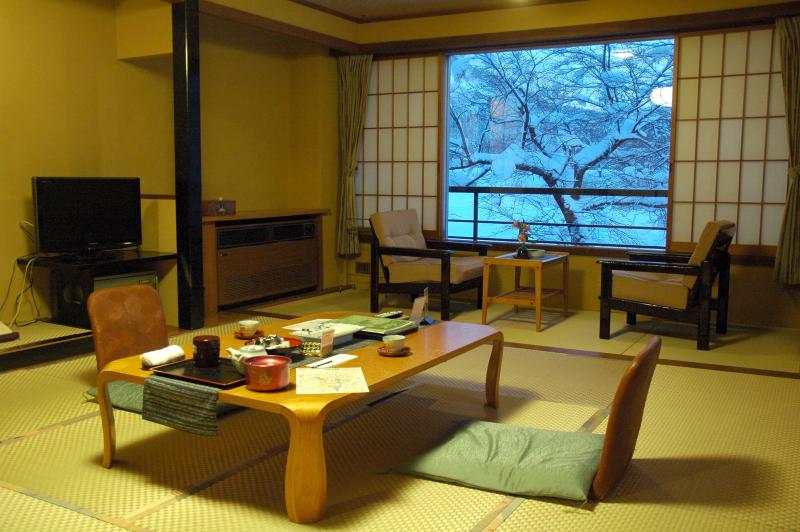 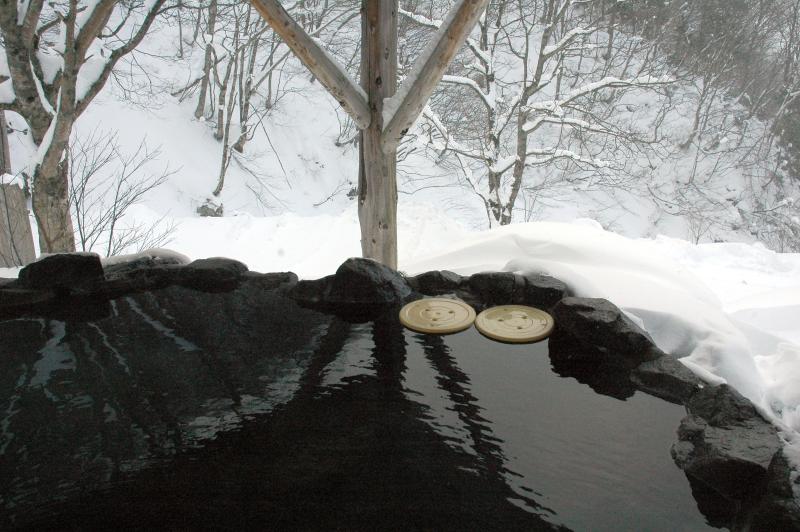 Also note that I didn't say "tatami" anywhere: while overseas visitors usually equate ryokans with tatami mats, this is not always the case, and an increasing number now have Western-style beds (at least in some rooms) to cater for older people who have trouble sleeping on the floor. For example, here's one of the Hōgetsu rooms at Tagaya, a famous ryokan in Wakura Onsen: 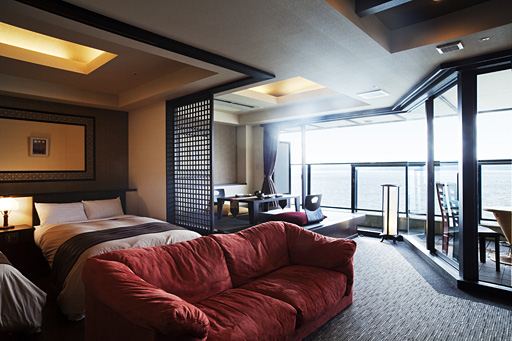 Note the little tatami alcove in the back with cushioned seats and tea equipment. This type of half-and-half wayōshitsu (和洋室), lit. "Japanese and Western room", with Western bedding but some Japanese-style space is also quite common.

All that said, it's a nice only-in-Japan experience to sleep on tatami mats, and so if you can't swing the ¥10,000+ per head it usually costs for the full-on ryokan experience, then a pseudo-ryokan is better than nothing -- but a real ryokan it's not.

I've stayed in a ton of inexpensive ryokans in the countryside. A low-end "ryokan" is basically the same thing as a "minshuku". I certainly wouldn't call them inauthentic. Indeed, sometimes the tatami and bedding were frayed, and the bath was not fancy -- but the service and food were good even at the cheap places.

No. There are just two rather different types of accomodations that serve different functions and markets but both call themselves "ryokan" - and fully justifiably so, since the word just means "inn", and according to Japanese hotel laws, if the rooms are Japanese style, it can call itself a ryokan (the details are considerably more complex, and there are sub-categories).

On the one hand, you have ryokan that provide simple accomodations for travellers going somewhere.

On the other hand, you have ryokan that are, themselves, a place people go to in order to sleep in a luxurious room, eat fancy food and see beautiful gardens and landscapes (and, often, take a bath in a hot spring in the middle of those). Obviously, these are far more expensive.

But by no means is the first type inauthentic. In fact, it is arguably more authentic, since that's all that such accomodations were originally: places for travellers to sleep (though of course some catered to much richer travellers than others). The second type is a more recent development, probably grown out of traditional ryokan in remote places adapting to increasingly fast transport options: when people can go from city A to city B without having to stop in the countryside C in between, then the inn at C has to find another way to attract paying guests if it is to survive.

Update: Still, jpatokal has a point: when a Japanese person hears "ryokan", the first thing they think of is the high-end onsen ryokan that they may sometimes treat themselves to as a vacation. But that definitely does not mean that anything else calling itself ryokan is a fake designed to rip off foreign tourists who don't know better.

On top of what Michael said, there is only to add that this myth that Ryokans must be expensive comes from the issue that Ryokans are normally not as space-effective as modern hotels - and therefore more expensive when it comes to downtown locations.

The maintenance costs for wooden build type of the room, the tatamis and the "live in your own home" style service level is not manageable for a 300-room sized Ryokan - next to the fact that a 15-floor building is not really what you would call traditional Japanese architecture. But if you want to pay the real estate costs (i.e. inheritance tax on property, etc) for a downtown location such as the famous Tawaraya inn in the middle of Kyoto, you will have a certain pressure to either be expensive or convert into a western style hotel where you have a much higher sqm-efficiency to justify the investment. The cheaper ones left in Tokyo can most probably survive because they are so rare and therefore ARE popular with tourists, have a high occupancy and are able to pay their bills.

Therefore, cheaper ryokans can be much more found in country-side locations and generally not so crowded places than downtown Tokyo or in the heart of a tourist destination. They can still offer the environment, but do not have the pressure to make room for a 70-floor high office tower.

Not the answer you're looking for? Browse other questions tagged japan accommodation culture ryokans or ask your own question.

66
In US hotels, what happens if you skip checkout and just leave the hotel?
4
Ryokans in Kyoto which are culturally interesting but not terribly expensive?
5
Japanese style or themed accommodation in Melbourne
4
What differences are there between Minshukus or Doyas and youth hostels in Kyoto?
0
In what scenarios is it beneficial to BYO yukata?

13
What are the typical meals in Japan?
7
Are there Onsen towns with both skiing and geisha?
4
Ryokans in Kyoto which are culturally interesting but not terribly expensive?
17
How to book accommodation in Japan when all websites are fully booked?
4
What differences are there between Minshukus or Doyas and youth hostels in Kyoto?
3
Are izakaya where the bartender doesn't stand opposite the bar inauthentic?