Is the sleeper train from Hong Kong to Shanghai an enjoyable experience?

I am planning my travel from Hong Kong to Shanghai by overnight sleeper train (T100) departing at 3pm and arrive at 11am. So, it is 20 hours long.

I have never experienced a sleeper train. I hope I could sleep well for 7-8 hours, and then doing some activities to make this a enjoyable experience.

Do you have any thought or advice? What should I prepare to make this an enjoyable experience?

Of course this highly depends on what you deem enjoyable. Also, if you have never experienced any sleeper train, it's hard to know whether you are in general the kind of person who would enjoy that.

Having said that, I found the Chinese sleeper trains to be surprisingly comfortable. There are, however, several different classes. The Wikipedia article on your train has details on which classes are available. (Side note: Chinese trains in general surprised me. The Shanghai-Suzhou train was actually more comfortable/modern than a recent German ICE.)

While I didn't take this particular train, I experienced both a "soft sleeper" and a "hard sleeper" on different routes (Nanjing-Zhengzhou and Zhengzhou-Taiyuan, respectively). Soft sleeper basically means you can shut a door and beds are fairly comfortable. Hard sleeper aren't as hard as it sounds, but they can be quite crammed (in my case, three beds stacked vertically) and since they are open to the aisle there's next to no privacy.

This picture was taken by me crammed in the top bed in a hard sleeper carriage: 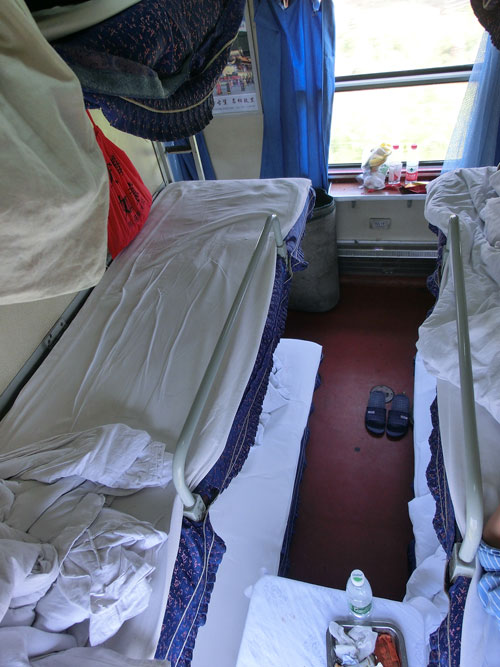 However, this was still okay for me for one night. This is probably as bad as it gets.

Now compare this to the pictures in the mentioned Wikipedia article. I envy you already! That train looks really modern and comfortable. 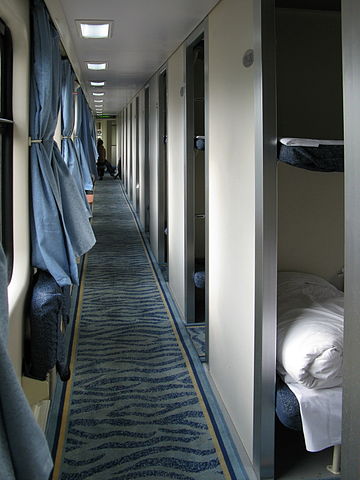 As for "doing some activities", if that means doing concentrated work, I wouldn't expect to be able to do that. Reading a book, looking outside, playing a card game with some kids, sure.

In conclusion, Chinese sleeper trains are actually quite comfortable and I would recommend travelling with them as it can be a great experience! The only thing you should plan well is getting the ticket, since there are times when they are sold out really fast. Maybe someone can elaborate on the situation on this particular route.

(Actually, me taking that hard sleeper train was just the result of the soft sleepers being booked out.)

Taking sleeper trains in China is an interesting experience and one you will remember for a long time. Whither you enjoy it or not depends on the frame of mine you have. In my opinion it beats the bus on all levels and ties with flying only because flying is generally faster. Sleaper trains have the advantage of saving you a nights hotel bill and usually take you from city centre to city centre so you don't need taxis and so forth.

It can sometimes be a bit of an adventure. Few people will speak English. Trains in China don't operate in the same manor as European trains. It is a bit more like an airport style operation where you wait in the waiting room for the train to be called, then everyone piles through the gates in just a few minutes and charge down to the platform. However, the train's staff are usually very diligent in their jobs. If you treat them politely they will look after you well.

I have taken about a dozen hard sleepers and one soft sleeper. Personally I think the hard sleeper is better. You see more of the people and can interact with other passengers better. There is more space between the bunks for storing luggage. There are fold down seats in the isle for people to sit on where as soft sleepers everyone just sits on the bottom bunk.

That brings me to the choice of bunks. When you buy your tickets, you can request a top or middle or bottom bunk. Be aware that the top bunk is more cramped. The bottom bunk will be used by the people above for sitting when your not sleeping. So the middle bunk is best.

You mention that you are travelling as a group of three so I would suggest you try to get two middle bunks and a bottom bunk. The three of you can sit on the bottom bunk together but still stay together when sleeping. If you get three middle bunks, then one of you will be in a separate bay on their own at night.

Bathroom facilities on the train tend to be very basic (hole in floor for WC). So shower before leaving your hotel and be prepared to wear the same underwear all night and into the next day. Take some light weight pants and T-shirts to wear at night. When you get off the train, go straight to your hotel, check in, shower and change.

Lastly, bring some food with you. On train food choices are quite limited. The Chinese usually by or bring quick noodles and cook them using the hot water supplied on the train.

I agree with @graup. The trains are quite comfortable in general. I took a hard sleeper twice. I still found the beds quite comfortable. A piece of advice I got back then was to go for upperbench. These beds give you a bit more privacy.

Although I really enjoyed travelling with these trains there are some downsides worth mentioning.

Another thing worth mentioning is the toilets. If you are the kind of person who is particular with hygiene then you are going to be in for a rough time. By evening there is nowhere to place your feet that isn't covered in piss or toilet paper.

Also, you need to be aware that the toilets get locked for the night after a certain time. This turned out to be a nightmare for me one time when I had the traveler's bug.

Make sure you bring your own roll of toilet paper and my suggestion is to also not buy any of the food or fruit that is sold from the sellers on the train. Although it seems safe, there is nowhere you can wash the fruit properly.

Otherwise the experiences I have had were quite pleasant (top bunk is the way to go).

As a Chinese,I have to say sleeper train is an economic way to travel through China,although there is cheap flight available sometime.

To make you comfortable on a sleeper train,

1.Bring some food or fruit aboard

2.Choose the upper bed if you'd like to enjoy your little privacy and of course you're not too large

3.Take some “wet tissue paper" (actually i dont know the proper word in English) with you just to make your dirty hands even face clean

4.The official train-booking website www.12306.cn In peak months,it sells tickets within 20 days（e.g. If i need the ticket from Shanghai to Beijing on Aug19,you have to book it online on Aug1)

It's interesting to find this website to see China in a foreigner-vision.

Not the answer you're looking for? Browse other questions tagged trains china sleeping or ask your own question.

10
Can I buy train tickets for a Shanghai - Beijing trip in Hong Kong?

10
Can I buy train tickets for a Shanghai - Beijing trip in Hong Kong?
3
Entering China from Hong Kong without a Hong Kong visa
11
Should I book my train connections in advance in China?
6
Is the train between Shanghai and Hangzhou smoke-free?
4
Overnight train to Shanghai: How do I ensure my partner and I are in the same sleeper?
0
Is a Hong Kong permit required by a Chinese citizen from foreign country - transit in PEK - Hong Kong?
5
border formalities when entering China from Hong Kong by train
6
Can I get a 5-day visa when entering Shenzhen through the Guangzhou–Shenzhen–Hong Kong Express Rail Link from Hong Kong?