What kind of roads am I not allowed to ride my bicycle on in Switzerland?

For instance, between Bern and Fribourg, there's a major road labeled (on Google Maps) 12 and E27. That's the highway and I don't ride there.

But there's also a road labeled 12 that runs from Bern to Fribourg, a bit more directly, but it's just a two-lane road, not a highway (perhaps it's the old highway 12?). Is it legal for me to ride on that road? (Google Maps won't let me drag my cycling route onto that road.)

In general, are there any roads besides the highway that I can't legally ride on?

The road 12/E27 you mention is such a "Autostrasse". There is a list of all streets in Switzerland of this type. The other "12" route is usable with a bicycle.

Please note that Google is not a 100% perfect route planner when it comes to travel other than private cars. Since it is not transparent why it chooses some roads over others, it is not ideal to conclude that a road not used by Google is therefore unusable in general. If Google does not use a certain part of the road you want to take, try to plan a short route on two unused parts of the road and see what happens.

On top of that, Google maps notes:

Bicycling directions are in beta. Use caution and please report unmapped bike routes, streets that aren't suited for cycling, and other problems.

In addition to uncovery's answer:

In my experience, the best way to see if tunnels are permitted is through Google Streetview.

I would like to provide an answer from the perspective of a Swiss cycling enthusiast, so I have experience both riding my bike for fun, and for going from A to B.

In general it's allowed to ride a bike where you would also be allowed to drive a car (i.e. on roads, but not on sidewalks) except when there is a sign saying otherwise. Signs banning bicycles usually look like this: 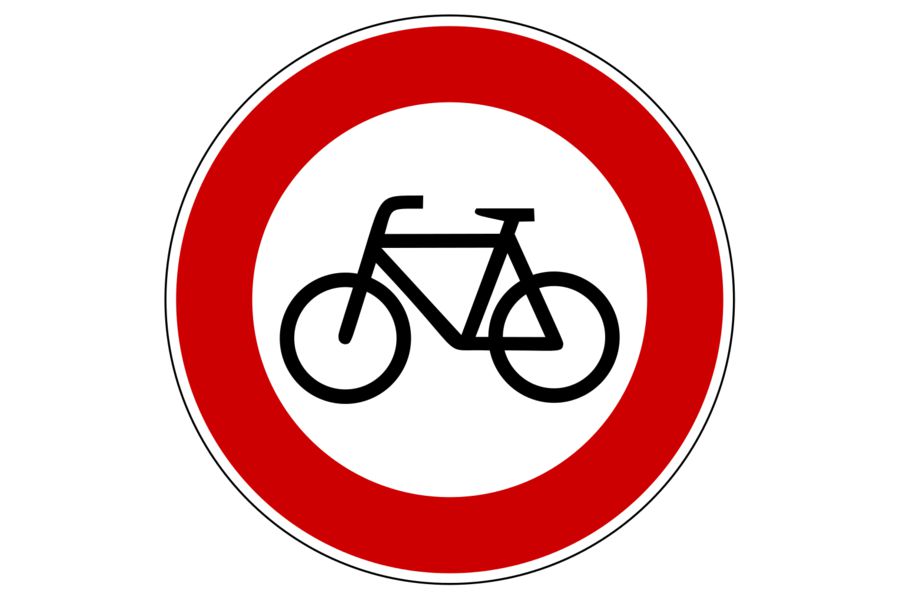 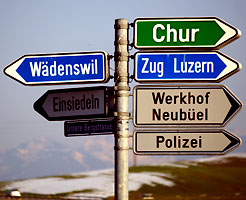 If a sign has a green background, it means it will route you over an Autobahn or Autostrasse, where cycling is not allowed. This green sign itself is not a ban on bicycles, you can follow it until you reach the access lanes to the highways. The access roads are easy to recognize: There is the following sign

and usually there are signs banning bicycles/horses/tractors/pedestrians and either reminding motorists that they need to pay for their usage, "Vignettenpflicht" or telling them that they can take this road without paying, "Keine Vignettenpflicht". As long as there are sidewalks, houses and crossroads you can be sure you are not on an Autobahn or Autostrasse.

When a sign has a blue background, you can follow it and assume there won't be legal restrictions on bicycles along the way (unless it specifically says so). That being said, following blue signs you might get anything between peaceful little used village roads and roads with significant traffic and no room on the side for bicycles so you'll be blocking the only lane in your direction. This depends a lot on the specific road and is often hard to tell in advance, although you are more likely to get the latter kind when there is a number in a rectangular box on the signs you are following. Motorists are sometimes hostile to cyclists who take those roads, especially if there also is a separate bicycle road which you could haven taken (see below). In city centres this is less of a problem because motorists are more accustomed to cyclists and speeds are generally low. Hostile means sometimes they might slow down and shout at you, but mostly they'll just overtake you closely, without slowing down and without paying enough attention to oncoming traffic. They are not usually paying attention to your safety, you need to do that for them: If it would be unsafe to overtake you with oncoming traffic, ride in the middle of the lane to block it, or you will be overtaken anyway (for example when going downhill fast, or when the road is narrow with no possibility to go off road if someone swerves into you or if there is snow/ice on the side of the road making the usable part narrow). If there is enough room to overtake you (with oncoming traffic) or if you could swerve off the road to avoid being crushed in the worst case, then keep to the side. 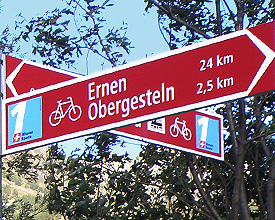 Small brown (or red depending on opinion) signs label special bicycling roads, they are often numbered. Pay attention to the bicycle symbol, there is also a mountain bike symbol (similar signs otherwise) and you don't want to mix them up. They are built with casual sunday riders in mind and will make considerable detours to avoid busy stretches of road. Unless you know the number of the route you want to follow, it's usually hard to follow them for large distances because they only label things close to you. If you do know the numbers they can make for very relaxed tours in comfortable surroundings. They usually lead you onto roads with little or no motorized traffic or alternatively with cycling lanes, but with lots of crossroads, blind bends, kids, dogs, etc. Usually they are paved and in fairly good condition, but occasionally you get roads which are not suitable for racing bikes and generally uncomfortable to use, like (potentially muddy) dirt roads or cobblestone. There is usually little or no winter service on those roads unless they also happen to be used by a fair number of motorists. If a stretch is impassable (flooded, logging, road works), there might not be sufficient warning and a lack of alternative directions.

If there is a closed road or a stretch of sidewalk where usually all traffic would be forbidden, but with a sign picturing a bicycle and the words "frei" (free), "erlaubt" (permitted) or just a white bicycle with blue background then you are allowed and maybe even supposed to use those, but you can be less sure about its quality than if there was one of the brown cycling signs. They might be fine, or the sign might mean something like "bicycling grudgingly tolerated, but not advisable".

So you won't reach Chur by bicycle by following that sign, Zug, Luzern, Wädenswil might have a lot of traffic but will do and Einsiedeln, Werkhof, Neubühl, Polizei are relatively near and definitely reachable.

There is a free on-line topographic map of switzerland here: http://map.schweizmobil.ch/?lang=en This map has all the "Autobahnen" and "Autostrassen" marked in Orange, and these are not permitted for cyclists.

Here's my own answer:

It's OK to ride a bicycle on any road in Switzerland except an Autobahn/Autostrasse. These are easy to recognize (for Americans) because they're akin to interstate highways in the U.S.: Limited access points, multiple lanes each direction, and high speeds. You're not that likely to accidentally enter one on a bicycle. You can also recognize them by this sign:

Given that the road 12 I was asking about was only single-lane each way, had low speed limits, and had numerous businesses and houses with street-front access, it was pretty clearly not an Autobahn or Autostrasse.

As best I can tell, the road I rode on was the "old" highway 12 between Bern and Fribourg before the Autobahn/Autostrasse was built and also given a designation of 12. We do that kind of thing here the U.S. as well, but we usually remove the designation from the old road.

Not the answer you're looking for? Browse other questions tagged switzerland bicycles or ask your own question.

13
Building an Igloo if camping is not allowed? (Switzerland/Liechtenstein)
9
Is it allowed in Amsterdam to give a ride on bicycle to another person
73
Is crime an issue in the US countryside, especially for a cyclist?
1
Toll roads in Switzerland
34
Does Google Maps take into account hills/inclines for route times?
2
Timetable for buses in Haute Nendaz (Switzerland)
19
May a cyclist or a pedestrian cross from Switzerland to France near the Basel EuroAirport without going into the airport?