Why does Google suggest roundabout routes in Berlin?

Have a look at this way to get from point A to point B as proposed by google maps: 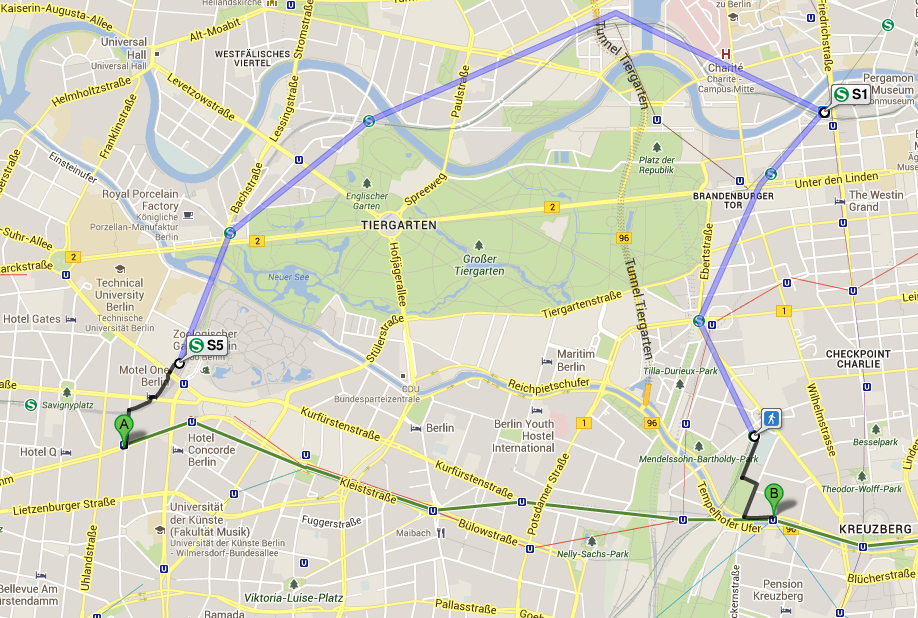 Why does it use S5 and S1 and then some walking instead of using U1? Won't using U1 be faster and easier?

I've never been to Berlin before.

Won't using U1 be faster and easier?

Yes - but Google Maps doesn't know about it. Apparently the public transit data in Germany is based exclusively on a cooperation with Deutsche Bahn (which operates the S-Bahn). Other public transit (including regional trains not operated by DB) are not taken into account.

They may eventually expand their data base (though it's been over a year already), but until then, this feature is basically worthless in Germany. You have to use the websites of individual public transit networks, such as BVG for berlin. Interestingly, for regional and long distance connection, bahn.de is the correct choice, since they take into account competitors' lines as well.

Why?? I don't know, probably they don't have the information about all kind of public transport. So it's better to use fahrinfo-berlin.de

Here is an exaple for this route: 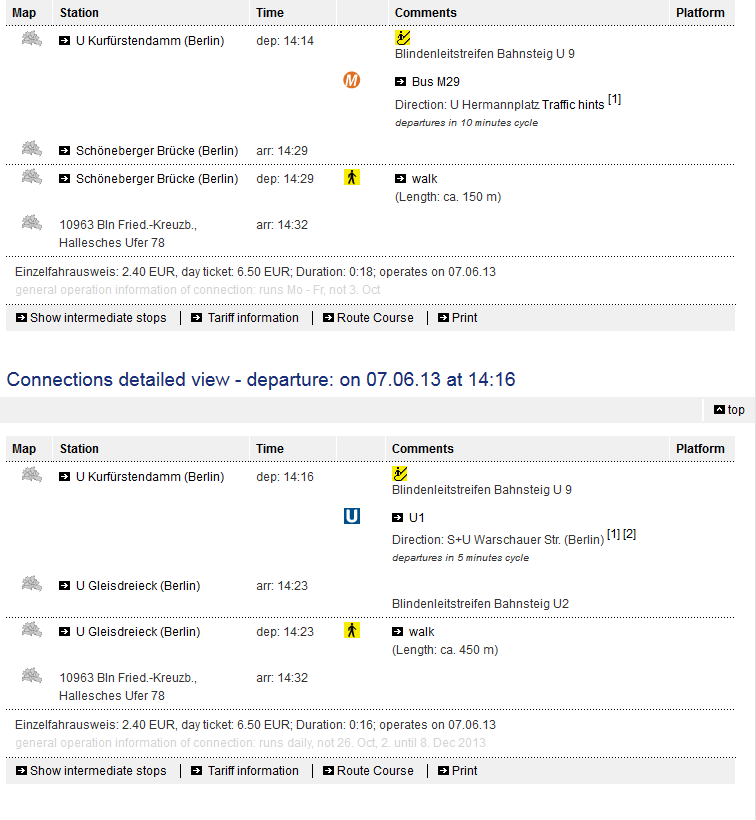 EDIT: Google maps shows also U-Bahns, Trams and Buses (but still only in Berlin and Brandenburg(VBB))

Michael is spot-on. On top of that, you have chosen "train" as your transport method, not "subway". You need to consider that the "S" stands for "Schnellbahn" (fast train), the "U" stands for "Untergrundbahn" - subway. Despite the fact that they are both running underground downtown.

To explain the difference: In most cities in Germany, the S-Bahn will be a commuter-like train that enters the city from outlying villages farther away on one side, crosses it and exits it on the other side to other villages further out. Also in Berlin, the furthest reaches of the train network are only operated by S-Bahn. It is underground in the center of the city, but over ground outside the city - so not a subway. Those are operated by the National rail service, the "Deutsche Bahn".

The U-Bahn will be mostly underground and mostly traverse around the city center. They are operated by the city.

If you chose "subway" for your travel instead of "train", Google will NOT chose the train, but instead recommend you to walk all the way.

Not the answer you're looking for? Browse other questions tagged online-resources public-transport germany routes berlin or ask your own question.

18
Planning to stay for 3 months in Berlin, Germany. Should I bring a car with me?
5
Driving from Tahsis to Zeballos (Vancouver Island)
14
Online hiking map for Alps
24
How are validated underground tickets checked in Berlin?
16
How can I know in advance which areas of Vietnam I'm not allowed to travel in, or need a permit, as a foreigner?
8
Is there an easy way to compare which airfare search engines cover which airlines?
13
Does a metric for road quality exist and are there maps showing it?
15
Is it frequent that a tomato is thrown at a tram in Berlin/Germany?
7
Australian driving / routing site that understands dirt / un-made roads?
3
Multimodal routing in the UK - what sites/tools?