I bought return Sparscheine tickets on trains from Vienna to and from Budapest in about 7 weeks time for my family using oebbtickets.at, but didn't see an option to reserve a seat before paying. Now when I try to reserve a seat, my chosen trains show "Ticket not available" (both for the outward and return journeys). 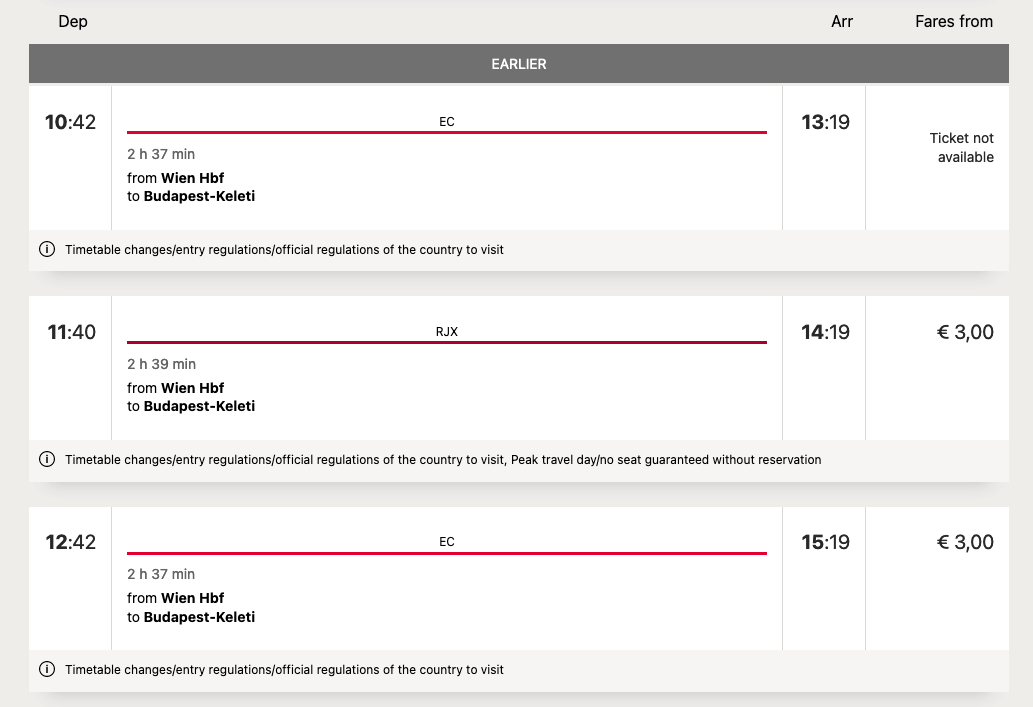 What is the reason I cannot reserve a seat, and will there be a time in the future when seat reservation on this train is possible?

I've had exactly the same problem with several other international trains in, out of or through Austria in the last few months. The last one was a Eurocity train from Prague to Linz yesterday, for which I booked the ticket itself in July, but was not able to get a seat reservation until August 21st.

The first time I had the problem was in June with a train from Germany through Austria to Italy. Trenitalia claimed that the train was sold out and wouldn't sell a ticket at all. DB and ÖBB would sell me a ticket, but no seat reservation. When I called DB to try to book a seat reservation by phone, they claimed that ÖBB had not yet opened for reservations because they probably had not decided which cars to run in the train. When I called ÖBB to ask when they would do so, they explained that the reservations were managed by DB's booking system and that there must be a technical problem. Reservations should have been possible for the train.

So to answer your questions:

What is the reason I cannot reserve a seat? Both explanations are reasonable. It may be, that the train operator has not yet decided which or how many cars to run in the train. It is also not unlikely that a technical problem somewhere has caused the issues. Anyway, even if you knew the exact reason, it will not be something you can fix.

Will there be a time in the future when seat reservation on this train is possible? I would assume so. Even if it is quite late, I have been able to make seat reservations on all the 'problematic' trains, but not until 1-2 weeks before departure.

7
Lost/missing half a UK rail ticket (advanced purchase), can I get it reprinted?
11
Should I book my train connections in advance in China?
9
Until when can you (for a fee) change a UK advanced purchase train ticket?
5
Using tickets from Vienna to Budapest
6
Bike reservation for SailRail between Great Britain and Dublin
6
Available seat choices on British Airways flights
27
Can you reserve a seat with a free child ticket for trains in the UK?
45
Who compensates my UK train ticket when the train in the ticket didn't exist?
11
Do European train bookings include reserved seats on a specific train departure?