There is tear in my nylon luggage as in the picture. How would you repair this?

There is a small tear in the corner of my nylon luggage. How should I patch it up? Can i use super glue to glue it? Besides the tear, everything else functions perfectly so I don't want to create more waste to the environment if I can... 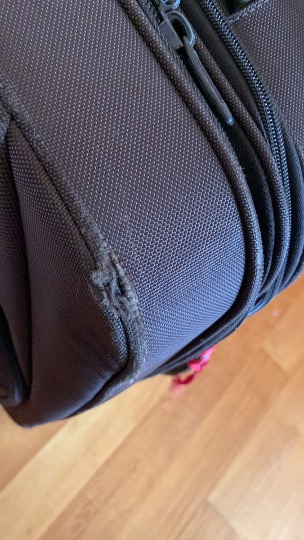 You have a few options.

There first is to leave it. It doesn't look like anything has a chance of escaping there.

You can stabilise the edges of the abrasion, possibly tidying it up a bit in the process.

It would be possible to fit the metal or plastic corner protector found on some cases, but first you'd have to obtain some, then rivet them on (at least the metal ones — plastic ones are more likely to be attached as part of the overall construction and hard to add later).

Personally I'd leave it for now, and use one of the fabric or outdoor gear glues I already have if it started to spread.

General answer: Darn it. I actually think you would have decent luck darning in this area, even if there is interfacing in the bag you will probably be able to pick up a thread with your needle by sliding your needle fairly parallel to the surface. (Which thread to use to darn this is also an interesting question.)

Second general answer: Glue-on patch. These are available as kits with several patches in a kit. Try to get a kit which either has the adhesive applied to the patches already or has individual adhesive bottles, because once the adhesive is open it will generally harden before the next time you need it. The bonus here is that you can get a kit which is specifically designed to work on nylon, so the adhesive should 1) adhere well, and 2) not damage the existing fabric.

Specific answer: The part that has torn is not actually critical to the function of the bag, so this is actually one I would just leave/ignore (unlike the general case if it was an important part, where I recommend patching holes as soon as possible since it's easier).

The part that has torn is called "piping". For a plain seam, the front and side would be placed wrong-sides-together, they would be sewn together, and then opened up like a book. Piping is sewn exactly the same as a plain seam but a third piece of fabric is folded in half and put between the front/side pieces so that it peaks out when the seam is opened up and makes that sort of raised piece that goes down the side of the bag.

Since the piping is a separate piece of fabric, a tear can't spread from that fabric to the adjacent fabric, and since the seam goes front-piping-side there's no real risk to the strength of the seam holding the front and side together (the important part).

The piping has a few jobs but they aren't so critical that there's a problem with it being ripped: 1) decorative, 2) having extra layers of fabric adds some stiffness to the seams which helps the bag keep its shape (but there are other stiffeners used as well), 3) since the piping is raised it protects the actual important fabric (the front/side)--in this case it is doing its job well.

(Piping usually has a piece of cord or something inside it, too, to help it keep that nice round shape, and the seam allowance is probably bound on the inside, etc., I am glossing over a lot of unnecessary sewing details here.)

This is something that a shoe repair place can help with if you want to go that route. I have a bag that my local boot guy fixed a hole in that went for years and years afterwards.

If the damage was basically cosmetic and didn't seem like it was likely to spread and get worse over time, I'd likely ignore it. This might be the situation here based on your picture, though it is difficult to tell for sure.

But if the luggage needs real repair (I'm usually a carry-on traveler, so I've busted zippers on cheap luggage trying to cram in a few extra purchases on the return trip), I'd take it to a luggage repair shop, found by searching for "luggage repair [name of city]" or similar queries. Sometimes luggage repair shops are combined with other services like shoe repair, watch repair, and key duplication. Bring in your bag, and they should have the tools and materials to do a long-lasting repair.

Some major name brands of luggage include warranties or offer out-of-warranty repairs for a charge. Their dealers can help facilitate a repair, or you can consult the service information on their website.

If there is a solid surface UNDER the tear, I'd mix a SMALL amount of epoxy and rub it into the edges of the tear. If the hole actually goes through, I'd first cover the inside with a scrap of something, with disposable padding to hold it in place till the epoxy hardens.

Epoxy will prevent it fraying further. I don't think anything but replacement can improve the appearance.

I'd recommend patching it with Sugru. It's a mouldable glue that comes in many colors so you can match your original color, or make the patch striking with red or something. I've used it for any number of things and really only had one failure (trying to repair a boat hook for my boat). I complained about the failure to Sugru's customer service and they sent me instructions on how to do a better repair along with some new packs of Sugru.

The one caveat is it takes 24 hours to dry, but you probably don't have your luggage in constant use so I'd imagine it's not that big of a deal.

Not the answer you're looking for? Browse other questions tagged luggage damaged-luggage or ask your own question.

113
Why would you wrap your luggage in plastic?
11
"Only hand luggage is included"
8
Traveling with luggage in Machu Picchu region and avoiding altitude sickness
5
Travel protection bag OK at airport?
14
What exactly is unaccompanied baggage? How do I use it?
6
Soft-shell spinner suitcase with brakes (and external side pockets)? Does it exist?
2
Refund for damaged luggage
0
Multi-Dimensional Knapsack-Problem or Web application that shows if boxes fit into a bigger box (luggage)
100
Considerations for very fragile and expensive (> $100,000) items in carry-on luggage