I have a United flight CDG-RTB-CDG. Now I already used CDG-RTB, and I want to change the date of RTB-CDG, which my fare allows without fee with price difference only.

The problem is that it's a pain to find an alternative flight. For each day that I want to look up prices, I have to enter it manually, then wait for quite a while for results to come up, then click the sort-by-prices button in the list.

Is there another way to search for prices of return flights, maybe getting a table overview?

Easiest is actually to call Unitd and let them do the work. From experience agents can quickly find cheap alternatives. I wish I had their tools available.

Update: When I called yesterday, the agent actually told me that she also has to look for flights one-by-one. So that was not much help, although I'm pretty sure that the agent that I called a few weeks ago did have an overview, because she could quickly tell me that the lowest price differences are on April 30 and May 8 at 151€. So, in the end I just used the interface by United, despite it taking several minutes to get each result. Now there was an option even cheaper than 151€ on April 30. I found a flight for 30€ that transits through Frankfurt (may hop off there).

The exact answer here will depend on the exact "fare rules" of your ticket which obviously we don't have, but I'll go with the normal rules you'd see for most tickets on that route.

In general, when attempting to change a ticket like this AFTER the departure of the first leg, the prices that are used for the changed legs are those that were in place at the time when you first booked the ticket, which will generally be cheaper than the current fares.

When you do something like look on Google Flights, you're seeing "todays" prices, not those that existed when you first booked the ticket. It's possible these will be the same, but it's likely they won't be. By looking for "one-way" flights you're also seeing the prices for one-way flights, which are generally higher than the price for return flights that your ticket is most likely based on.

The only places that will be able to give you accurate pricing for a change is either United or (possibly) the travel agency that you purchase the ticket through - if it was purchased through a travel agency (and even then, the travel agency will likely need to work with United to work out the correct prices).

In theory, you could try using the "change flights" functionality on the United website, however the unfortunate fact is that this functionality is known to not always function correctly - it may not give you all options for flights, and may overprice what it does offer. As a result, this is generally not the recommended way to do it, especially for a ticket that includes at least 3 countries in it!

Which leaves you with only one option - call United. As you've said, their agents have access to systems that should be able to calculate the new prices relatively easily, although even then they can sometimes have difficulty pulling up the historic prices depending on the exact situation.

I would try the following:

Once you’ve found something interesting, check on the UA site.

Fare rules are complex enough that this is not guaranteed to get you the best price, but it should be a step in the right direction. Hopefully!

Note for instance that your original fare could include restrictions such as a minimum or maximum stay, having to stay over a week-end, travelling only on certain days of the week, black-out periods, and more.

You can presort with a tool like ITA Matrix https://matrix.itasoftware.com/search

Search for "one way", "calendar of lowest fares" and United as the airline (routing code "UA+").

If there are any dates that look better than others, you can start with these. For May this does not look promising: 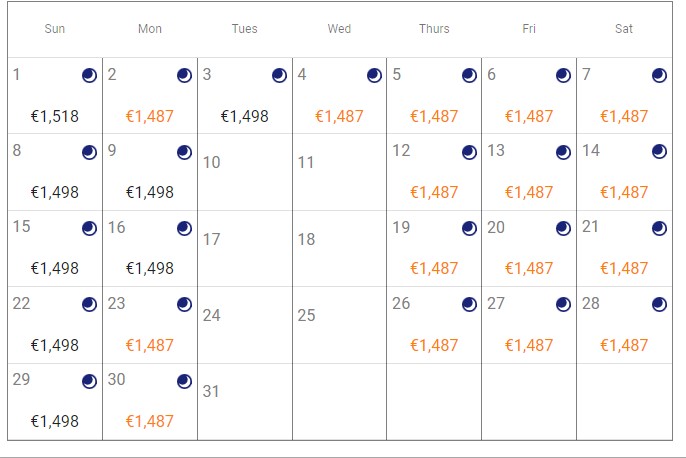 Not the answer you're looking for? Browse other questions tagged air-travel flight-search-engines united-airlines or ask your own question.

18
Searching for flights to "Anywhere" in narrow time frame
18
what is the most advanced flight search engine besides Azuon and Matrix?
14
Help a nervous flyer plan routes that minimise flight changes and time spent in the air
21
When I know the airline, the flight number, and the airport at each end, but am very flexible with dates, how can I find the cheapest flights?
7
How to find the cheapest destination for a meetup of friends from several countries?
9
How to book a flight when the exact return date is not known yet?
8
Flight search by time in air?
3
Forceful change of flight schedule by American Airlines