Is the 4 Corners Monument wrong, or is Google Maps wrong?

This is around trying to travel to a specific point. People do this for the tropics, for the Greenwich Meridian, the equator and more.

The 4 Corners monument is meant to be on the corner of Colorado, Utah, Arizona and New Mexico.

However, Google Maps has border lines for the state visible, that do NOT properly intersect with the monument, missing the center.

So if I wanted to stand on the actual corner and know at the time that I was, which is correct? 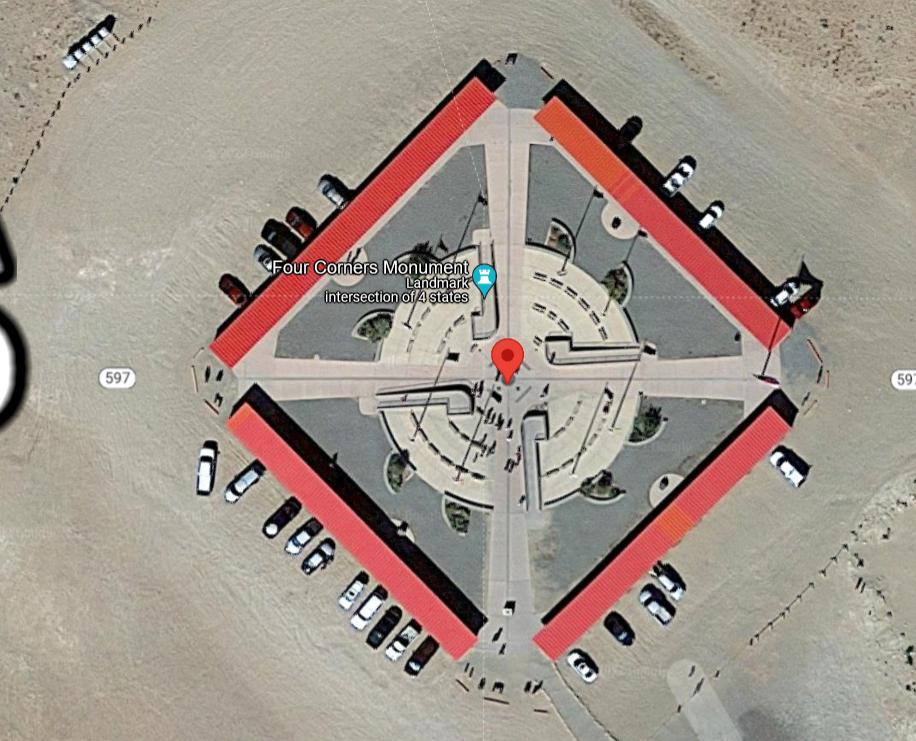 There was a discussion in a land surveying forum of how far off Google Earth was in various situations. Google Maps and Google Earth are not exactly the same product, but the discussion may be illuminating nevertheless. The amount of discrepancy noted by the OP seems in line with what the surveyors were finding.

I am going to add a bit more background to Gerard Ashton's answer as my background is in mapping, surveying, and GIS. Gerard is absolutely correct. Whatever the original survey said is the location of the Four Corners is where the four corners is located. If the monument was placed there in accordance to the survey, the boundaries are located at that location.

But as to why Google Maps says otherwise...

The TLDR: The Earth is a bumpy, lumpy, slightly squashed sphere that is then flattened onto a map. There are unavoidable distortions and errors.

Yes... this is simplification, I am trying to fit at least two semesters of college classes into a few paragraphs for the lay person. There is probably a couple of errors, if they are egregious please comment.

The difference between Google's location of the lines, the photographic location, and actual location is down to how the data is recorded, stored, and presented to you. It is common to use GPS coordinates (EPSG 4326) to store locations, but this makes a lot of assumptions about the actual surface you are standing on. This assumption of the surface is called an ellipsoid, an idealized surface of the planet and GPS uses an ellipsoid called WGS84. Because GPS services the entire world, it has to idealize the entire planet. But the planet is slightly squashed because of its rotation, the continents are slight raised because they are lighter than the magma they float on, in some areas the ground can raise as much as a metre after an earthquake. The Earth's shape isn't ideal, so there are going to errors between ideal and reality.

Most geographic data in the areas of the US acquired during or after the Louisiana Purchase are officially mapped in what is called Public Land Survey System, with much of modern work done in PLSS or State Plane. Within the State Plane system there are further subdivision depending on which area of which state you are surveying. For this coordinate system, it uses another idealized Earth, usually NAD27 or NAD83. This idealized Earth better fits the region, meaning measurements are more accurate. With surveyor gear, it is extremely accurate and used to define property rights. This is how the Four Corners area was defined and why it is so straight.

So, Google maps is trying to take GPS coordinates, aerial photography, and various other spatial data, stored in various formats and coordinate systems and show them to you on a projection that is a derivative of a map projection that was used for sailing. There is going to be error. Because we don't have reference to the actual location using the surveyed coordinate system and projection, the photo and the lines shown by Google could all be incorrect. It is possible that nothing seen on that map could actually be in correct location. However, despite common thought, photography is usually done by airplane not satellite, and aerial photography is commonly taken by the local coordinate system. If I had placed a bet, I would say the photograph is more accurate, ignoring the fact it is stretched over a Mercator projection.

Using your phone's relatively bad GPS reciever, depending on number of satellites overhead, you can only expect 3-6 metre accuracy in the first place. Unless you spend $10,000+ dollars on RTK GPS, do some post-processing, or learn how to survey land, you probably are better relying on local knowledge. Consumer grade GPS is good for getting you close but not good for accuracy.

The answer is somewhat interesting. The monument itself is the legal border, as defined by New Mexico v. Colorado, 267 U.S. 30 (1925) because it lies directly on the lines "as surveyed". However, the surveys themselves were slightly in error and may be as much as 1800 feet out from the geographical definition of the boundary referred to in the same court decision.

I don't know whether this is helpful, but below is a picture of my GPS (unfortunately without coordinates shown) from the middle of the monument at Four Corners. When I was there (in 2005) I recall somebody saying that "this is just representative, the actual border intersection is about a hundred yards over there in the desert". At the time I didn't attempt to go find it. 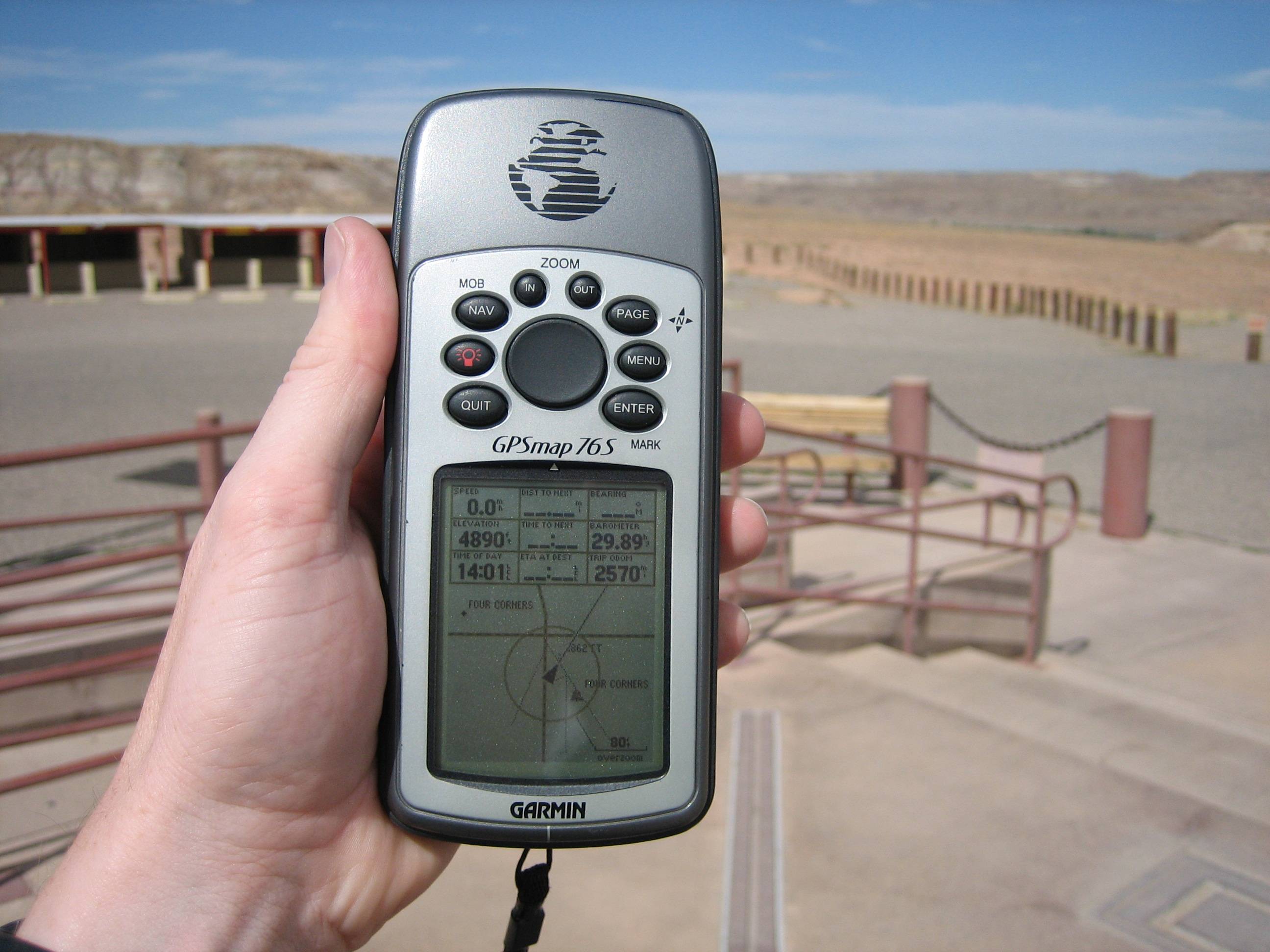 Not the answer you're looking for? Browse other questions tagged usa landmarks geography or ask your own question.

7
Is there a monument I can visit in Ecuador that marks the center of the earth?