Which left turn light do I follow in this California intersection?

I have been travelling in California recently, and in a sorta-rural area I came across a confusing left-turn lane traffic light setup.

It seems there is no left-turn light on the overhead pole directly in front of the driver in the left turn lane, but instead on a separate pole on the left corner of the road, to the left of oncoming traffic.

That is bad enough, if you don't notice that separate pole you will think the intersection is unprotected. What's more confusing, though, is that there are two circular traffic lights on the overhead pole directly in front of the driver that can have two different colors. What is this setup, what should I do?

Here are two pictures of the intersection I encountered. The lights were like this down the entire road. Here is the Google Street View.

Use the light that corresponds to your left turning lane based on the sign beside the light: 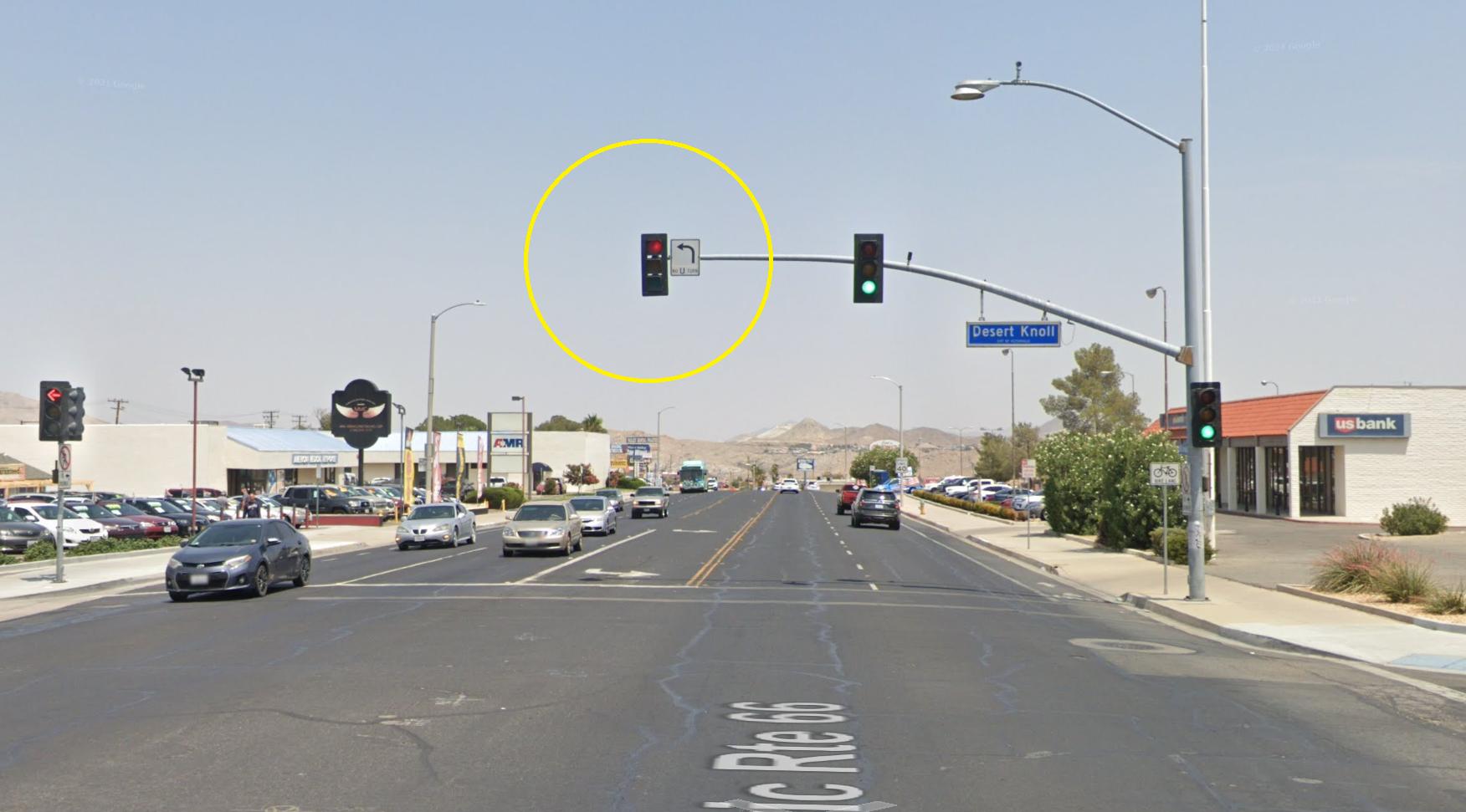 Or, to answer the question more precisely, you can use either light - they indicate the same cycle. The shorter one could be there for a number of reasons (tall vehicles, the lovely California sunshine in your face, legal requirements) and I agree that having both can be confusing if you're not used to it.

The overhead red light in this situation is also commonly a red arrow rather than a red circle, as mentioned in the discussion on Franck's answer.

Even if the red light is a circle, the green light will normally be an arrow, to indicate that the left turn is protected from oncoming traffic. If it's still a green circle, I would treat this as a regular unprotected left turn!

Here's another example, from the next intersection north on Seventh & Victor Street: 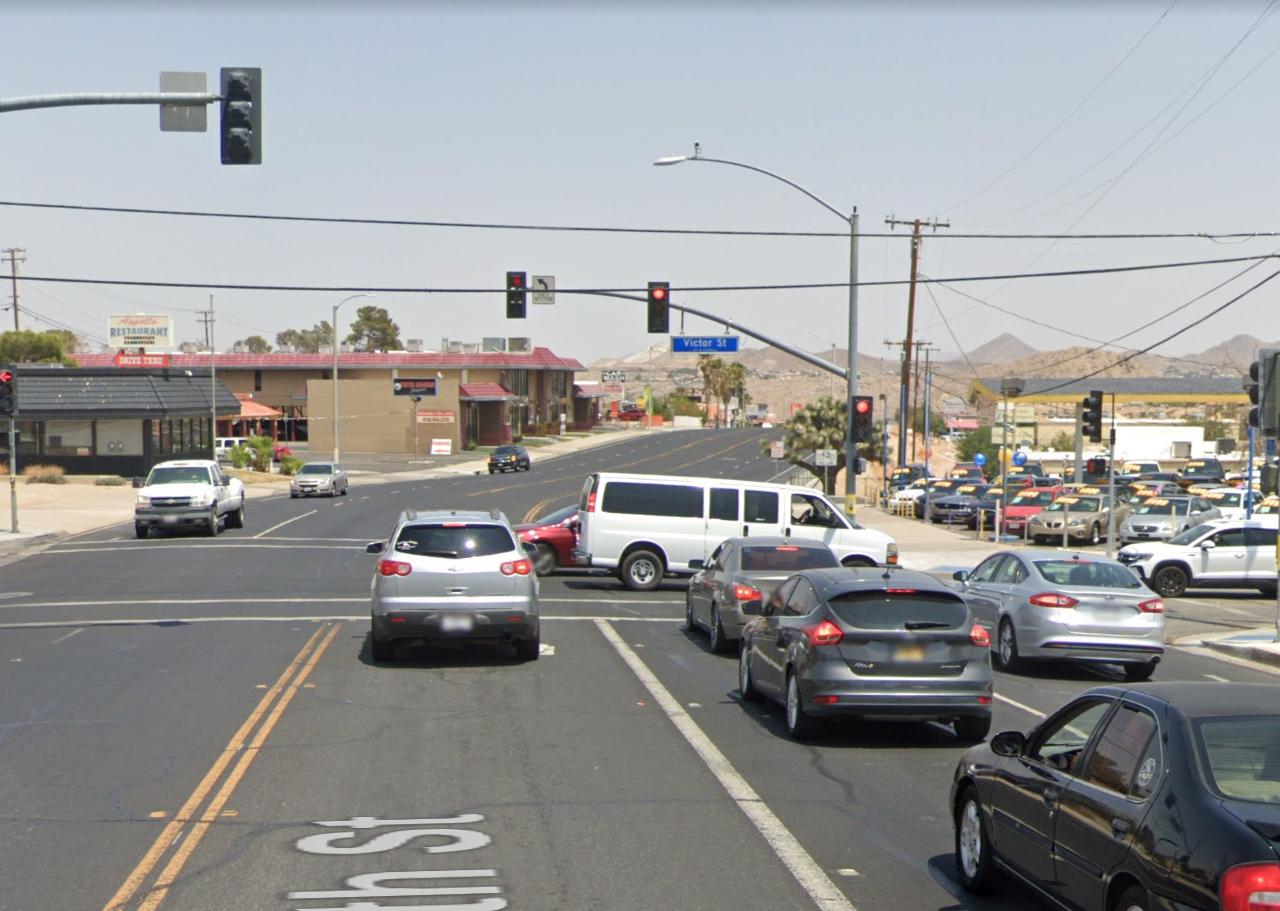 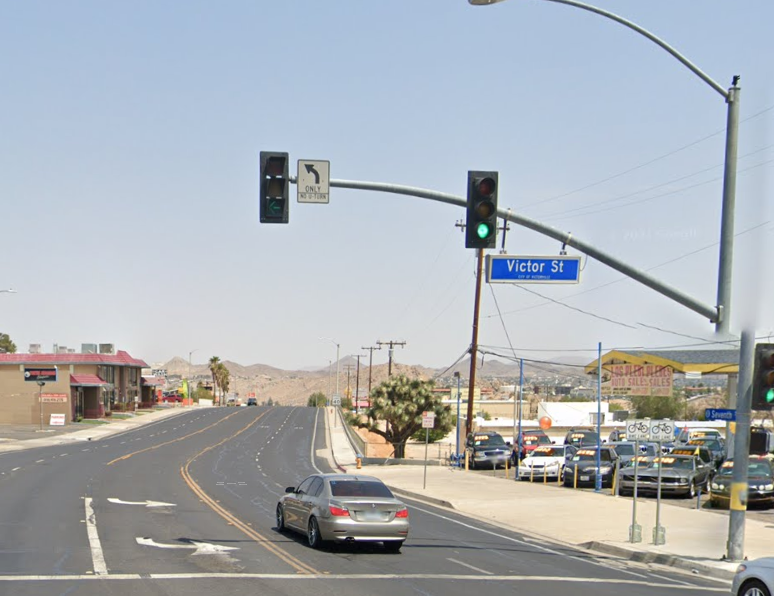 Update: Funnily enough, your street view link also shows that there's a green arrow instead of a dot on that very light, though it's hard to see from the side street's angle: 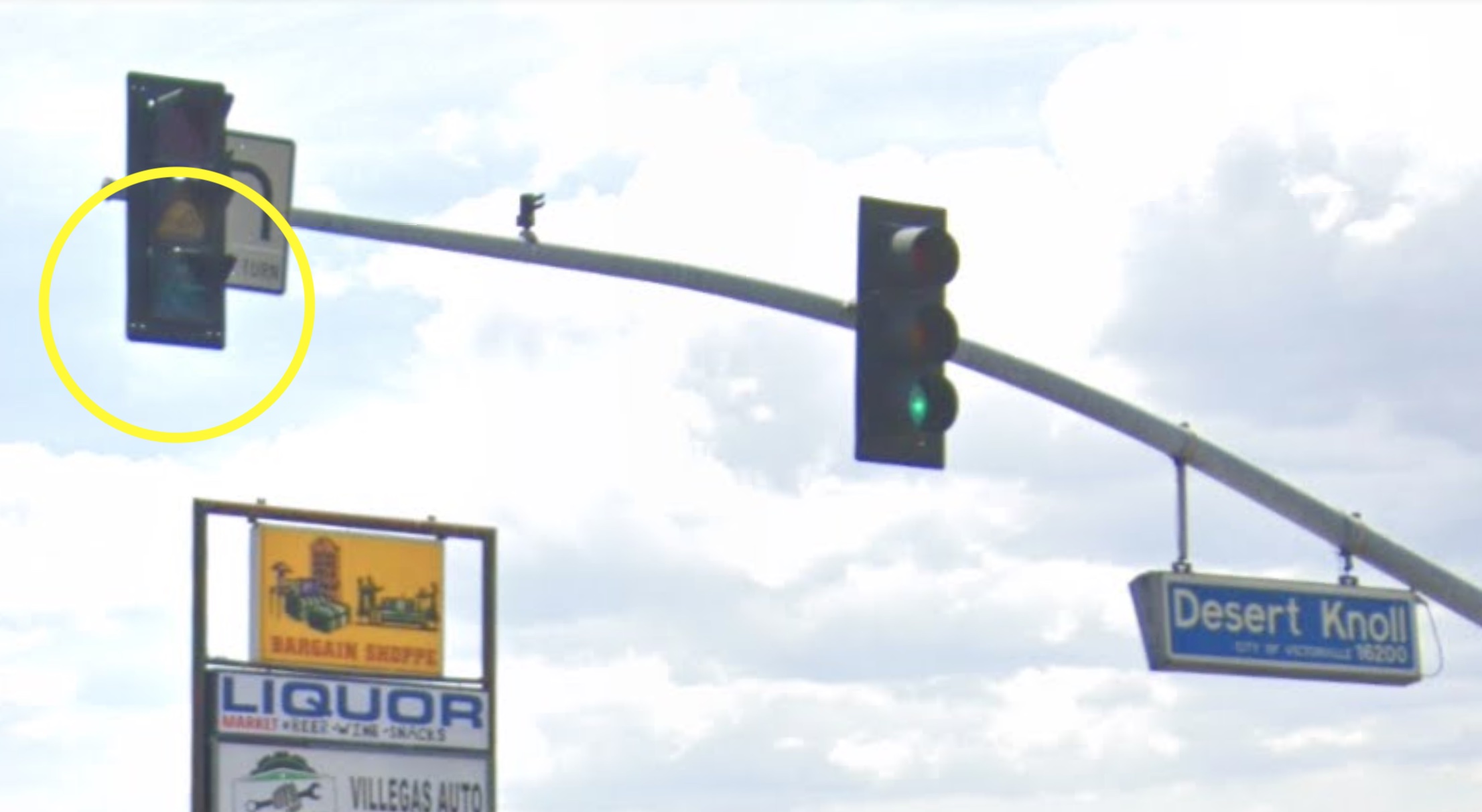 Follow the light with the arrow if you're turning left (i.e., the light on the separate pole on the right corner of the road, on the oncoming traffic's right). 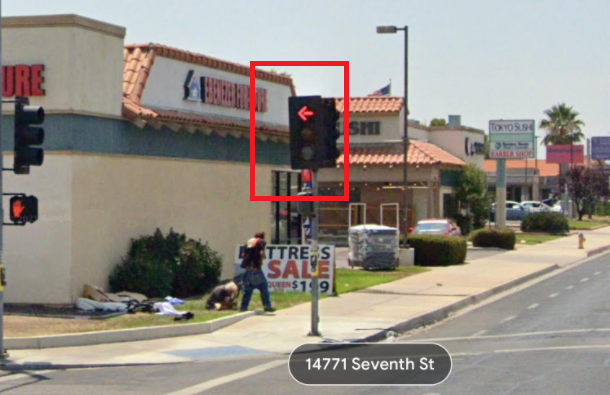 A driver facing a steady red arrow signal shall not enter the intersection to make the movement indicated by the arrow.

It should have the same color as light 1 below (notice the black-and-white arrow sign next to it):

Lights 2 and 3 are for going straight. What a mess ✞

They are the same. Obey the non-broken one.

The bulbs are hard-wired in parallel and are driven off the same controller ports. The controller doesn't even know there are 2 signal heads. (Maybe).

As implied, they are there to provide redundancy both for bulb failure and sight lines (truck blocking view of forward one).

If there's only one signal and it fails, it requires an immediate response from maintenance, or traffic will be snarled. Two heads mean "fix it in a day or two". That's the real reason forward has 2 heads.

Those are the best two places to put two left-turn heads.

I say "maybe" because newer controllers can sense current draw changes, and will "phone home" to report a bulb out. Depending on design it may need 1 bulb per port. (This is also a hindrance in LED adoption, ask anyone who tried LED turn signals and had their blinker go crazy or the console report bulbs out).

15
Right turn signal in Pennsylvania - can I turn on red?
40
What does this road sign mean? (Germany; red circle and X on a blue background, with a right-pointing arrow.)
4
Stopping at a red light for a right turn in Massachusetts
30
Within the United States (Pittsburgh), when merging onto a lane, which turn signal do you use?
14
Unmarked T/Y intersection. Where do I turn left?
9
How to safely turn right in Thailand
7
Left/right right of turn on an intersection in USA