I am visiting Monaco during the F1 GP weekend from 24/05 - 27/05. I am staying at Nice and traveling to Monaco on Sunday on the GP day. I am planning to arrive in Nice on the evening of 24th by Eurostar and leaving Nice on 27/05 in the morning by Eurostar. Didn't book a flight because I love trains and flights were costly, airlines assume everybody going to Monaco are filthy rich. I have the whole Saturday to myself and any guides on what to do in and around Nice. Not a great fan of food and public places(city centre and stuff), but would love some insights on beautiful places, mainly beaches and French countryside, to travel. Not afraid of walking or traveling and going hungry.

On place I can recommend for hiking are the mountains behind Vence. It's a 1 1/2 hour ride by bus from Nice downtown. Either you climb the mountain above Vence which is quite high but stunning, or you take the route to other places in the area. Saint-Paul de Vence and Tourette are a bit touristy (specially during the summer) but the places inbetween are really nice, and Vence also has a food market in the morning that is very nice to see. All places are small enough to walk around. 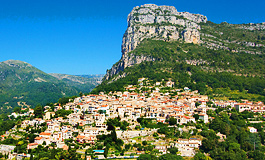 The Landscape is very dynamic in the area and a lot of fun. Just be careful with the cars, they are not known to be very pedestrian-friendly in the area. There are also some famous museums in the area such as the Fondation Maeght.

The closest places are in France, but there is architectural and historical continuity with the Italian Liguria (Nice became French in 1860 only!), so Italian places are worth a look too if you like this kind of places. And the train to Ventimiglia will take you there quite quickly (Nice-Monaco: 25min, Monaco-Ventimiglia: 25min).

From Nice or Monaco the best public transportation option is to take the Nice-Ventimiglia (Vintimille in French) train, it has a lot of nice spots along the way. The view from the train, along the Riviera, is quite scenic, and tickets are cheap. Bus options are also locally available (see the Transportation paragraph under Inlands below).

The map of the local train network can be found on the SNCF TER PACA website.

Nice places along the way include:

There are also lots of nice beaches along the train line -- with some that you can only reach by walking -- but if you want to avoid the crowds you'll have to leave the cities. Check buses that might pass nearby (Google Maps + bus maps help!) or hitchhike or walk if you don't have anything against a few km.

If you love hiking by the sea and among the trees, take the Sentier Le Corbusier or one of the Sentiers des Douaniers.

Lots of nice sights with medieval stone houses, rivers and some forests. For the French buses between Monaco and Menton see CARF en Bus. For the Italian buses see Riviera Trasporti.

Roya valley (above Menton and Vintimiglia)

If you have some more time, you can carry on with a bus or another train to e.g. the Roya valley:

If you love trains and countryside, I highly recommend the Train des Pignes from Nice to Digne-les-Bains. This is a touristic train with a beautiful scenery.

Not the answer you're looking for? Browse other questions tagged france monaco formula-one nice or ask your own question.

1
As an EU national, if you live in France for a few months, what are the rules around registration / tax / etc?
6
Train from Nice to Monaco during Grand Prix weekend
8
During a French TGV strike, must I go to the station to get a full refund for my ticket?
6
What is accessible in Monaco during the Formula 1 races?