Photograph allegedly from Barcelona in 1987

This image has been bothering me for years. It has been in Wikimedia Commons since 2014 named "Barcelona Ramblas.jpg" and described as taken in 1987, but I'm sure it's not the Rambles and I can't identify it as anywhere else in Barcelona, and although I would be happy to be proven wrong, I think I know my city fairly well.

Furthermore, it looks older than 1987 to me. 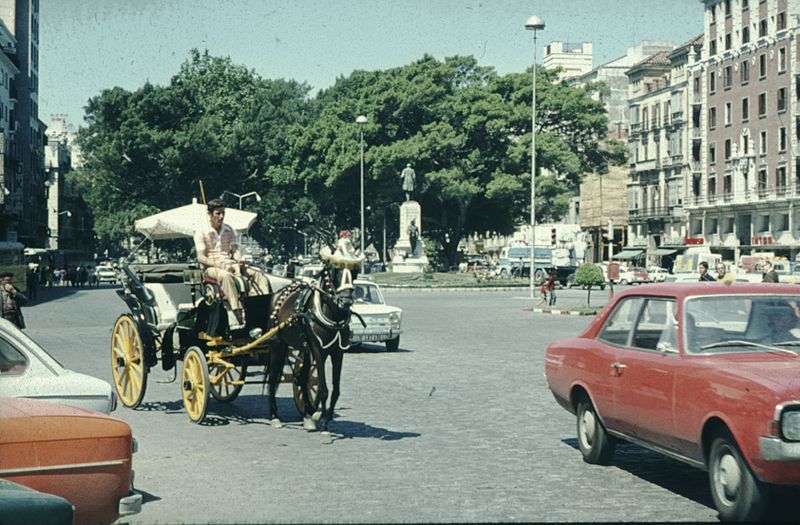 The carriage looks like those that existed in Barcelona until a few decades ago, and I assume they also existed in most touristic large cities in Spain. The cars look a bit older for 1987 but not unfamiliar, so I think it can be an Spanish city in the 1970s or maybe even earlier. The car plate could give a clue if not for the rein that hides the province code, although it makes less likely the provinces with a two letter identifier (like the Balearic islands), in addition to confirm that the photograph is likely taken in Spain because the car plate looks like the Spanish car plates of that time (province code plus six digits, black on white).

I tried looking in Google Maps for similar avenues, but I couldn't find a place that match the photograph.

Then the question is where this photograph was taken, in order to properly tag and classify it in Wikimedia Commons.

For convenience, the full size link to the image is https://upload.wikimedia.org/wikipedia/commons/d/d2/Barcelona_Ramblas.jpg

Using Google Lens and its reverse image search I can safely say that this is Málaga, Spain because the monument in the image is the Monumento al Marqués de Larios! https://es.wikipedia.org/wiki/Monumento_al_marqu%C3%A9s_de_Larios

Found through this site: https://www.lahornacina.com/articulosbenlliure1.htm where a picture of the backside of the monument is included, as in the original image here.

Today the spot (https://maps.app.goo.gl/APGWzZDdskfpRWLC8) looks very different. It even seems as if the monument was moved and is now facing another direction. Satellite view still shows the old situation as probably in the original photo but Streetview shows the new situation.

I would also say that the photo was taken in the 70s, especially because how that man driving the carriage and the older one crossing the street are dressed.

Not the answer you're looking for? Browse other questions tagged spain identify-this malaga andalusia or ask your own question.

11
Where was this train photograph taken?
2
How to get from Malaga to Sierra Nevada via Motril?
6
What are the differences between Barcelona Pass vs Barcelona Card vs Barcelona City Pass?
2
Most direct way of getting from Malaga airport to Granada?
12
Where was this photograph taken?
0
Travel options from Barcelona to Skydive Empuriabrava
56
Where is this tower, likely photographed in Belgium about 100 years ago?
29
Identifying a Romanesque church in France from a 1900s photo