Why do American gas stations' bathrooms apparently use these huge keys?

In one episode of Beavis and Butt-head from the 1990s, they are out back at a gas station. There is a vending machine with a bathroom door on each side of it marked "MEN" and "WOMEN".

A woman comes walking (supposedly from the gas station's store area) carrying a key which has a huge, clunky, metallic thing hanging from it. She stops at the door marked "WOMEN", unlocks it with the key and leaves the huge thing hanging in the door on the outside as she enters the bathroom.

I understand that the bathrooms are probably locked in order to discourage homeless people from sheltering in there, and to require some sort of "permission" to use them, meaning the key, but my questions are:

I'm making the assumption that this "background detail" is based on reality, which is usually the case in this animated show's universe. Typically, it's just the main guys who are stupid, but anything that happens around them tends to be "how it really is". 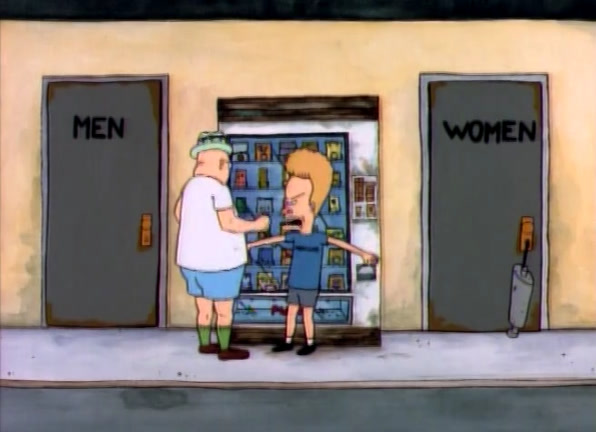 So that people don't forget them in their pocket and leave the gas station with the key.

These are very common in the US, I've usually seen them as a large wooden block, roughly 1"x3"x12". Note, the one in the Beavis & Butthead clip posted looks like an old muffler, probably as a gag; I've never seen a real one made of a muffler. Also, at least the ones I've used, you generally take the key in with you, because, as you say, someone could come along and steal it. These restrooms do often have deadbolts inside too (and sometimes they don't. Hard drug use in gas station restrooms isn't uncommon and emergency services will need to get in if someone ODs in there).

With objects such as keys or pens that people can easily absentmindedly forget they are holding and walk off with, something is often attached to them to make that more difficult. This being a cartoon, this is exaggerated both for comic effect and because smaller details are harder to draw.

We used a 1970 Pontiac 350 alternator adjustment bracket for the bathroom key return device. Just large enough to prevent disappearance by accidental pocket storage but light enough to be easy to carry.

The station down the street had a 10 pound disc brake rotor attached to a chain to his key, however you did not want to use that restroom unless there was no other choice, it was a pig sty, as was the rest of the station.

The episode was a more a joke than need be. Gas stations that offer restrooms, often incorporated the key with a huge weight or silly object. One to deter theft of key. Also key is property of station so prevent it being lost by being easily distinguished so you don't accidentally take it with you when you leave. Modern gas stations avoid this, often having open rest rooms which shut with those rolling screens you see at malls.

One of the reasons they have a big "thing" attached to the key is so you don't lose it. With something as big as a small cat, it would be hard to lose. Another reason is to prevent theft of the key. You can't shove a key attached to some big "thing" into your pocket so you will be forced to carry the key. And when someone sees you carrying a key attached to the "thing", they will know immediately that you were the person that stole the bathroom keys.

Also, I wrote "thing" because I didn't know what the metal thing was.

Not the answer you're looking for? Browse other questions tagged usa culture history toilets gas-stations or ask your own question.