Is it possible to do a round-the-world trip by train and passenger ship only? Missing link for crossing the Pacific

One of my bucket list projects is to go around the globe - solely by using railways and scheduled passenger ships.

I found out that the thing is nearly possible, except one missing link. The travel plan would resemble the following, starting from western Europe. Note that it does not take into account our current travel restrictions due to Covid; this would be in an ideal world where things come back to normal. Visa / paperwork challenges are not covered as well.

To cover the missing link, I thought about cruise ships. Some sail one-way crossings at shoulder seasons between the Mediterranean and Caribbean to reposition, for instance. But that area of the globe seems not affected by the phenomenon.

Are there any other scheduled oceangoing options to cover that missing link? It is also possible to suggest different itineraries than northern hemisphere coast-to-coast.

Scheduled is important here due to the fact that the Pacific ocean crossing has to be booked along the other legs of the trip. Freighters may have a few passenger cabins, but can slip their schedule by a few days or leave early if goods are delayed or come sooner (as far as I could understand). On either side, trains mostly run daily, but I would avoid the risk of missing the Queen Mary 2. Waiting time for the next passage can be expressed in months.

I found a cruise that goes from Tokyo to San Francisco (20 nights).

The link is here:

The route map is shown below: 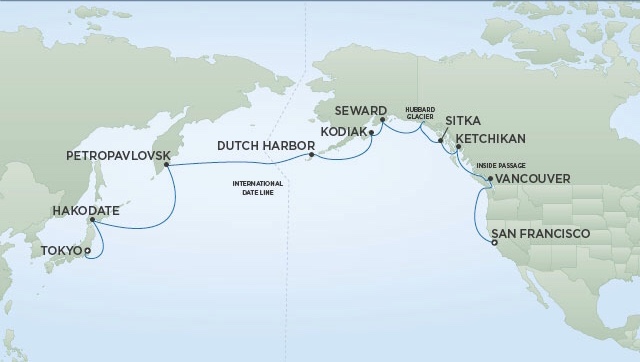 There is no regularly scheduled passenger liner service across the Pacific between Asia and the US. Your options are:

Viking Ocean Cruises offers several cruises that cross the Pacific. Among them:

There are also several cruise ships that go around the world, here’s one from Oceania Cruises:

Then you could take a 27-30 hour train from New York to Miami if you want to loop.

If you’re looking to start in Europe, there are cruises from London to Bergen, then Bergen to Montreal, then train (Amtrak) from Montreal to New York, New York to Ft. Lauderdale (involves a short bus ride), then cruise from Ft. Lauderdale to London (goes through Australia, Asia, Africa, and back to Europe).

If you’re keen on hitting each continent) you can take a cruise from Ft. Lauderdale down to South America:

You can also work in Antarctica this way if you’d like by taking a cruise from Florida down to South America, from there to Antarctica and back, then South America back to Florida.

Not sure what currency you use, but your spend is somewhere between $50,000 and $140,000 Canadian dollars depending on what you’re looking to do (adding in South America and Antarctica will cost more obviously and cost of certain cruises are much higher)

This may be a little more out-of-the-box (read as: dangerous) than you were looking for, but if you start in Asia you could go up to the easternmost point of Russia. Then, in the middle of winter it is actually possible to ski or snowmobile into Alaska. From there, you could presumably either rent a car or dogsled into a larger city like Anchorage, from which I imagine there are boats or more cars available.

As of 2021, cruise ship travel is very much a shadow of its former glory. There have been limited attempts to restart them in Europe and Alaska but so far passenger number are low, positive COVID tests are still a threat for every journey and international borders are still a major headache. Exotic cruising routes such as Tokyo-San Francisco are probably going to be the very last to restart and I'd be surprised if you could board one prior to 2025.

Sure, cruise lines are happy to advertise supposed Trans-Pacific routes (link taken from Zach's answer) but in reality they're unlikely to be launched any time soon. Personally I wouldn't get my hopes up until at least one ship manages to complete the journey with paying passengers. So the realistic answer to your question is no, its not possible, short of chartering a yacht or using some other non-scheduled type of boat to cross the ocean.

Yes, it is possible.

There are various repositioning cruises between Asia and US. The problem: they run on shoulder season (fall and spring, when repositioning Alaskan cruises to southern seas). And just few ship do it.

In addition, there are world cruises, which allows also doing just partial trips. You may need to look them. Note: it depends on cruises, which partial trip you are allowed to do, and often they requires two or three (or more week), but it could be nice, if they do the southern pacific route (so you visit a lot of islands).

Also from other answers: fright ships may be an option. There are various site which offered such travels (now with COVID things are more difficult, because also the crew is often not allowed to disembark on many ports).

Unfortunately Eastern Island and Pitcairn have few ferries but only on one direction (one just to Chile, the other to New Zealand).

Atlantic: there are repositioning cruises (much more then in Pacific), world cruises, and there is also the only remaining liner ship which does regularly the transatlantic crossing.

The rest of world (but Antarctica) should not pose a problem: there are railways and ferries. Ok. Africa and South America may be more difficult, because there are ferries and railways, but not really a "network" (so links). You may need to opt also buses, and other private transports.

12
What routes are there to cross the Pacific East-to-West (without flying)?

4
What does a surcharge for departure dates mean for an round the world ticket?
10
Possible ways to find sponsor for world tour / adventure type trip around world
8
Ticket for a day trip by train and bus in Skåne
2
For a round-the-world trip starting in October, east to west or west to east for climate?
11
Is there any airline/alliance that offers round the world tickets for more than a year?
18
Is Sydney - Papeete - Easter Island - Santiago possible on a round the world ticket?
2
Russian train ticket for the World Cup
8
Does any passenger train go between the United States and Mexico via San Ysidro?