Why is this mileage marker in British Columbia placed exactly 111km away, seemingly in the middle of nowhere?

While driving from Alberta to British Columbia, we noticed a road sign stating that Prince George was 111km away: 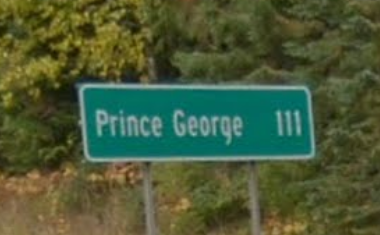 We wondered why this specific road sign had been placed at a specific mileage of 111km, seemingly in the middle of nowhere. There aren't any cities or stops nearby that would incentivize a road sign specifically here at the 111km point.

It's expected that there are some reminder road signs that tell you how far away the next major city is, but why here? Some highway planner would have drafted up a road sign to go specifically here for some reason, right? They wouldn't have paid to build and install a sign unless there was some reason to.

Is there perhaps a law that requires road signs in British Columbia to be placed after a certain number of kilometers? Is this just an equidistant spot between some points of interest? What motivates the placement of this type of road sign on a British Columbian highway?

Destination distance signs are supposed to be placed

Approximately every 20km between destinations or 40km intervals for highways that lie north of 54° latitude.

(More resources are available at the BC Ministry of Transportation and Infrastructure's page Traffic Signs & Pavement Markings.)

This highway is just south of 54 degrees north latitude, but I could not find another sign either 20 km west of this one nor 40 km west. But I did find one that is (nominally) exactly 100 km to the east, which appears to have been placed just west of McBride in keeping with the instruction to install these signs

I suspect that this is the reason for the placement of the sign that you found.

Not the answer you're looking for? Browse other questions tagged road-signs or ask your own question.