Ask Question
Asked 5 months ago
Active 5 months ago
Viewed 2k times
3
This question already has an answer here:
Arriving in Copenhagen and going to Malmø (1 answer)
Closed 6 months ago.

When you exit customs you just continue to the end of the building, you might need to turn slightly left. Don't use the taxi exit.

There are two types of trains:

There are four types of ticket machines that I know of:

I've found it easier to buy the ticket up front online at https://www.sj.se/en/home.html#/ There is also an app you can download and buy tickets on your phone if you have decent data coverage.

From my experience, Copenhagen Airport is very well signed, with all directional signs being both in Danish and English. The train station is located next to Terminal 3 (see this map), and there is signage pointing to the railway station throughout the terminals. Make sure that you follow the signs for Trains, not for the Metro.

There is a ticket office next to the steps leading down to the platforms, as well as ticket machines that can sell you the ticket there. You might also be able to purchase a ticket online in advance, check https://www.oresundstag.se/en or https://www.dsb.dk.

Once you arrive and have passed immigration, collected your luggage and walked through customs, you will most likely end up in the middle of the public area of terminal 3 with the train station (and metro station; although they are distinct) directly ahead. If you somehow exit into the public area in another part of the airport, follow the signs to the train station which should lead you directly there.

If you are good at orienting yourself with respect to the shape of the building, the main terminal building of CPH is essentially one long rectangule with a large-ish triangular extension landside approximately in the middle; this triangular extension is where the train station is.

In that general area, there should be many ticket machines. You should look for the ones that say 'Tickets to Sweden'. This reference site says they are red and grey. They will only take cards, no cash.

Instead of buying the tickets on the spot, you can also buy tickets online beforehand. You have two main options: oresundstag.se (by Øresundståg, the operator of the local trains connecting Copenhagen and Malmö) or SJ.se (Swedish state railways). In theory, the first website will only show you the cheap local trains while SJ will also show you long-distance trains at a markup. Make sure to choose an Øresundståg train when booking on SJ.se. Be sure to avoid the trains labelled SJ.

When booking tickets online, type in Copenhagen airport as your departure station. Depending on where in Malmö you want to go, your arrival station could be Hyllie, Triangeln or Malmö C, depending on which part of Malmö you intend to go. (There are more stations in Malmö but those three are on the route of the direct trains out of the airport.)

A ticket you buy online is valid for three hours before or after the time indicated on the ticket! So you can safely book a ticket in advance and not need to worry about a plane delay or not finding the station.

With your ticket in hand, you just have to find the platform. It is labelled Trains to Sweden; it is also platform 1. You need to go downstairs (by elevator or inclined people mover). If you are going upstairs from where you buy the ticket, turn around and go back because you are going the wrong way. Await the next train.

Beware, some Danish trains may arrive at the airport station as their final destination or begin their journey into Denmark from said station; they may be on your platform. Likewise, avoid the silvery-grey SJ long-distance trains to Stockholm. The train you want to be boarding is the one pictured below: 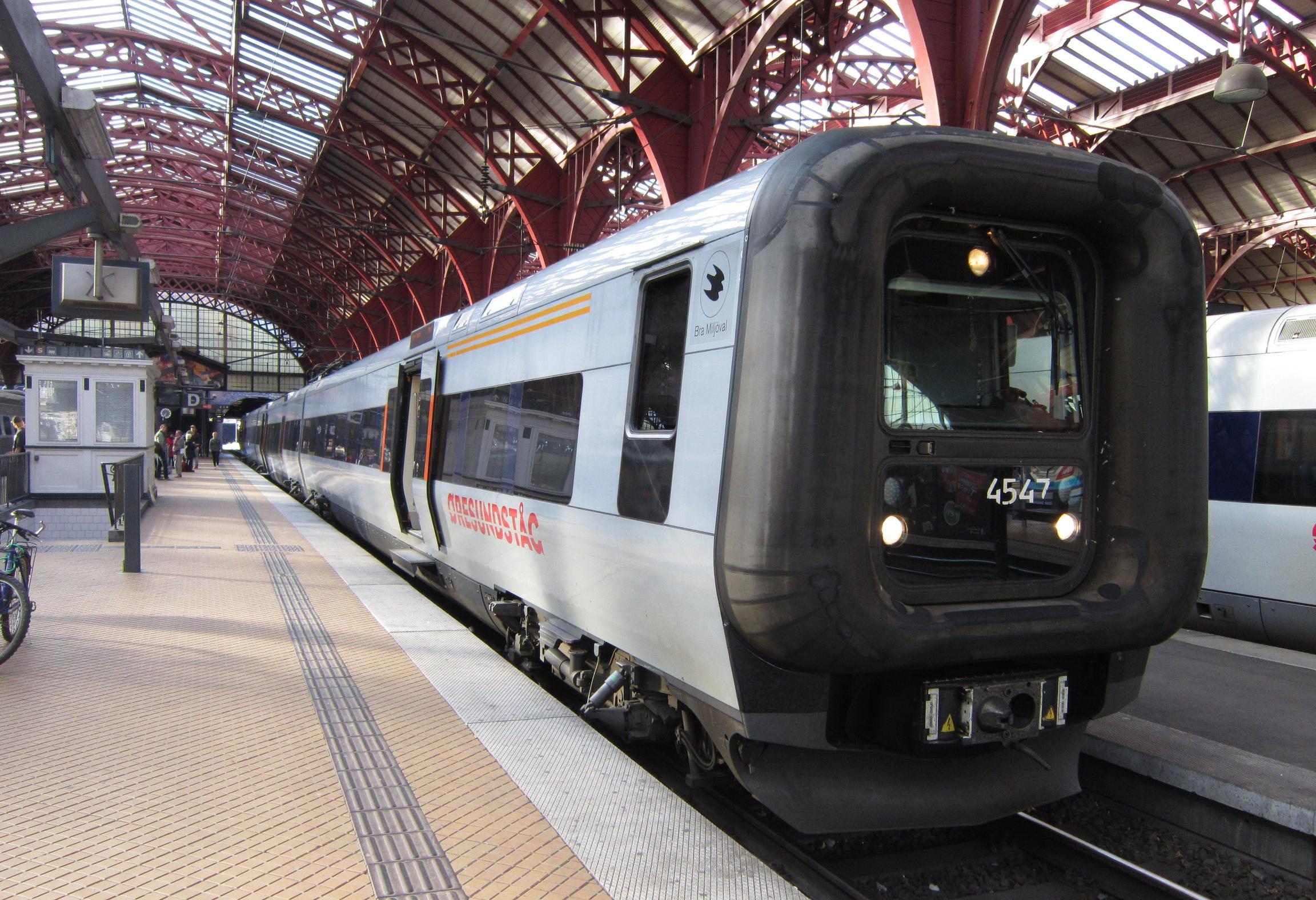 Many of these trains have different segments going to different teminal stations. This doesn't matter for you, as they all go through Malmö and to the stations mentioned above.

Once you're on the train, enjoy the trip across the Oresund bridge into Sweden.

Note: there may be passport/ID checks upon entering Sweden. They were in place prior to Corona due to the general refugee situation. They had become infrequent and no longer systematic by summer 2019 (the last time I took a train from CPH to Malmö) but the facilities were still in place. I don't know if they were continued through the pandemic in any way. As an EU (non-Danish) citizen, just show your national ID card. As a non-EU citizen, your entry stamp into the Schengen area in your passport or your residence permit plus passport suffice.

Not the answer you're looking for? Browse other questions tagged trains airports sweden copenhagen malmo or ask your own question.

4
Arriving in Copenhagen and going to Malmø