How can I learn map reading for navigation?

I don't know if anyone will relate but I can't read google maps to navigate. I have to ask 20 people to get to one location. Getting to a new location is always a hassle for me. Because of this reason, I am not able to leave my country for abroad even though I want to move abroad. How can I learn to read maps, can you share a course that can enable me to be able to read maps to navigate? I never want to be lost again, for that I need to learn to read the map.

Maps are simply a representation of the physical world. IMHO the skill of map reading and navigation is simply being able to view your surroundings, identify distinct features and then relate theses features to the symbols that a shown on the map of your location in order to identify where you presently are. Once you know where you are on the map, you then identify a set of symbols that are between you and your destination, and then locate the real world equivalents of those symbols. This then gives you a real world direction to head in order to get closer to your destination.

Thus the skill set you need to practice will involve:

In addition it's also handy to be able to use the position of the sun or moon to help you identify North/South/East/west as maps in general are oriented with North at the top - so knowing where North is can make things easier (although after having grown up in the southern hemisphere, my sense of where North was was really screwed around with when living in the northern hemisphere)

Like all skill map reading and navigation improve with practice. But you can do this bit by bit. EG start out with a map of your neighborhood and proceed to walk around it and identify where you are on the map. Then increase the size of the area you want to navigate through as your confidence increases. In addition you can study maps before going on a journey and pre-plan key locations (mountains or intersections) and the directions you should head when you encounter them.

You could practice navigating by map in an environment you know very well.

Get a map of the neighborhood you live in, and go for a walk while looking at the map. Look at landmarks in your surrounding, like streets, buildings or water and try to identify them on the map. Then find out where you are by comparing the relative positions of things on the map to the relative positions in real life. Then make the decision to walk from there to some other place you can identify on the map by following the paths you see on the map.

Then try the same thing in an environment you are vaguely familiar with but don't know completely inside-out.

Then try an environment you've never been to before.

By the way: The maps on Google aren't the best. Open Street Map often has far more detailed maps than Google. But Google often lists more businesses and other points of interest, which can occasionally be useful for both navigation and tourism. Local geography bureaus often have even more detailed maps but with even less advertisement. Compare this village in Switzerland on Google Maps, Open Street Map and on Swisstopo, the geography service from the Swiss government.

Have you tried Live View on Google Maps? This uses your phone to figure out where you are and shows instructions on your screen layered on top of the camera view, making it easy to navigate. 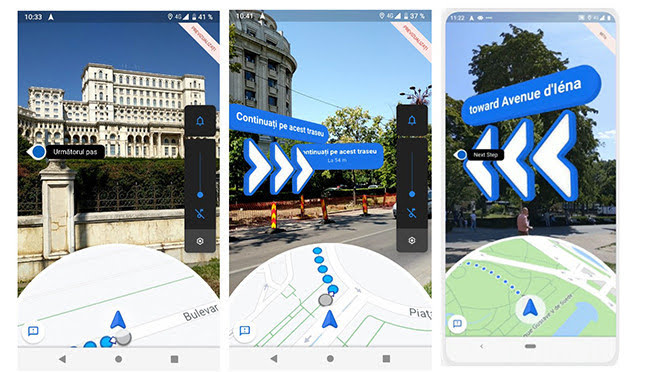 In addition, it shows the regular map view at the bottom, showing you how the map relates to the real world.

Note: Not supported in all locations or on all devices.

Start at home, and work with your own familiar territory. Get maps for that.

The kind of maps that fold out to quite a large size.

You need the huge, enormous size. Because you need to be able to see both the large and small at the same time.

Trying to do maps on a phone is hopeless. It's like trying to look at a paper map through a shutter the size of your phone. Yes, you can "zoom out" on a phone, but then, you lose all the detail. With a paper map, you can really 'take it all in'.

For instance, get a map of California and try to hand-plot a course from Carson City NV to Bakersfield CA. On a paper map, you can see there's a big problem. The Sierra Nevada is in the way! I can't show you that, because no computer screen is large enough or clear enough to fully convey what a real map can show. (that's kinda the point).

But on a phone, you see either this 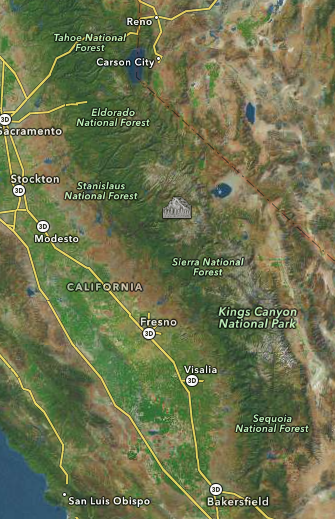 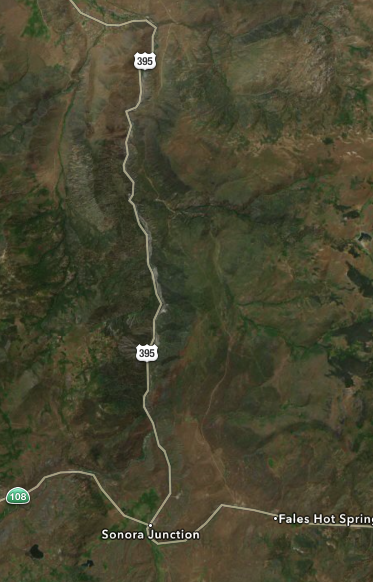 Where the hell is this? How does this even connect to the rest of the map?

Who is surprised this is obtuse and impenetrable?

Once you're working with real maps of size, you will start developing the skill on your own to recognize how the physical world you observe corresponds to what is on the paper. You will see marks you don't recognize (e.g. on a topo*) and you can simply go there and look what that is.

It's a super horrible map, but it's a pocket map of territory you already know/remember from the real map. And it makes up for the horribleness by having Harry Potter-like features, like saying "show me gas stations" and they just pop up. Or give you turn-by-turn directions to the nearest Culver's. Or not having to elbow the driver in the face just to unfold them.

Never pass up a real map

But I really hope, if you listen to me, that everytime you pass a Welcome Center, you'll step in and pick up one of the free maps that most provincial Departments of Transportation issue. And you'll spend at least a few minutes poring over every detail of the map, at least in the areas of interest.

The best source for maps are travel clubs, such as America's AAA. You have to be a member, but they have collections of maps that all match each other. For instance there'd be no trouble covering a wall in your home with a "collage" of regional maps of a province, make sure they are all the same scale. Now you can step back and see the big view, or step in and see the detail.

For larger cities, they also make city maps that drill down to every single street. These maps too may be in several sectionals, for a large city like Chicago or the Bay Area.

Printing maps from online sources wouldn't really be the same. Generally, online maps are rendered for screen resolution of 75 DPI more or less... real maps have resolutions of about 600 DPI.

Also, online maps delete many features, since one can flip back and forth. For instance the above maps, taken from Apple Maps, are terrain view. Turning off terrain shows more roads, but hides terrain, and even then, doesn't show many roads at all, since you could zoom or ask for a route to see those roads. Real maps show it all.

Try to avoid map atlases and books, such as Thomas Guide. Unless they are VERY large, they have the same basic problem as a phone - they just aren't big enough to show both overview and detail.

Other sources of remarkable maps include aviation maps, which include a lot of airways data and show every railroad (which most maps do not).

And another excellent source is US Geological Survey Topographical Maps or "topos". The entire country is done in these maps, and are available for a few dollars in large sheet form, or online of course. They dispassionately show the territory with gradient lines for terrain, and many technical details well beyond the interest of automobile drivers, such as logging roads, mines, drains, and abandoned railroad lines. These are superb detail maps for outdoor activities, but you still need the large maps to get oriented to where you are.

Not the answer you're looking for? Browse other questions tagged maps or ask your own question.

23
How to generate a travel map?
6
Map of Vietnam to mark up and draw on ahead of time
8
How can I map stations for a driving trip?
2
How can I show my GPS location on a map from my phone?
14
Online hiking map for Alps
2
Does Google Maps app work well when offline in Dordogne France?
14
Japan Map App. How to get around?
3
Road trip distance/driving time planning
2
Interactive map for when and where to go