I need to plan a travel in Greater London (within the M25) over multiple destinations via buses and by walking.

Many online tools, including Google Maps and TFL website, enable finding the best routes between two or more points in the city (with some flexible options such as 'with least walking' or 'with least transfer'). However, their flexibility is still limited. They don't support a highly-customized journey, e.g. a mix of taking buses and walking between destinations.

There is some large printable street maps with buses information in the TFL website but it is not easy to recognize and track routes of buses. Also, there is an interactive bus map that shows only one bus route at a time (it would be great if it shows more than one).

Is there any interactive tool/map that enables 'manual', highly-customized planning of journeys based on mix of buses and walking?

It's iPhone/Android only, but I find Citymapper easily the best routing tool for London. It does support mixed mode journeys, and there is a limited ability to customise the modes of travel - for example, I have done mixed bus/walking journeys with it in the past. I don't know if it allows you to customise the journey to the extent you want, but it does allow you to pick, for example, "Rain Safe" (least amount of walking possible).

I don't think the exact tool you are after exists, mainly because the bus network is just too complicated. To start with, people in London tend to use the tube and rail for longer journeys, and only use buses for local routes; and this is what the available maps are optimized for. E.g. the tfl bus maps allow you to select a bus stop and see what buses go from there. There are two types of tfl printable maps, the first ones are the ones you can find on bus stops, with all the buses going from there. The other ones are big maps with all the buses in a given area of London (5 areas). These are not at all interactive, but will probably be the most useful for manual planning. It used to be possible to obtain these on bus stations free of charge (a few years ago at least).

You can also use the Tfl journey planner: in the advanced options you can untick all the transport types you are not interested in, change the walking speed and maximum walking time. It is anything but manual planning though....

Update (2015) - this answer is now largely obsolete. Citymapper since gained the ability to browse bus stops and view whole routes, and London Transport Pro became less reliable. I'd now recommend Citymapper over all alternatives I know about.

It's basically Google Maps, but with every bus stop shown for browsing. Prod a bus stop, and it tells you what buses are arriving there, when they are expected to arrive (live info), and where they go (I don't think Citymapper lets you browse bus stops like this). So, you can browse for bus stops going the right way, then see where their buses go and if it's close enough. 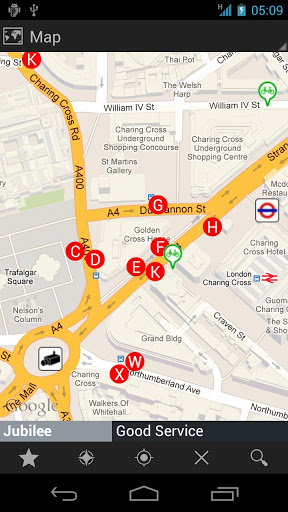 Prod a bus and prod the 'pin' button, and it draws that bus route on the map (like Citymapper) so you can see exactly where it goes.

Tip: Look at which side of the road each bus stop is on to see if it's going your way (and remember it's driving on the left).

It's also really useful for telling you when the next bus(es) are expected to arrive. Quite accurate (as accurate as TFL where it gets its data).

It also has a journey planner based on TFL's where you can turn options like bus, tube, cycle on and off. In theory, you can pin these routes to the map like above, but that seems buggy at time of writing... The main strength of the app is browsing bus stops and possible routes to figure out your own best route.

You can use Google Map Engine lite.

You can create maps, draw into it and import other data from Google. More info can be found on the help page. Google has the complete bus schedules of London. You can see that if you click on any of the bus station icons and plan a transit with public transport and choose "bus" as one of the options.

Not the answer you're looking for? Browse other questions tagged online-resources buses london maps walking or ask your own question.

11
What museums and attractions in London offer interactive exhibits for blind people?
2
Weather map for US coasts including past patterns and monthly averages?
5
London Bus Map app offline
11
Map of bus stops for Greyhound in Canada?
19
Is there a map that shows the walking time between London Tube stations?
19
Last fuel stop before airport
20
With '7-day Unlimited MetroCard' in NY do I have to wait 18 minutes to transfer from one line to another?
7
TFL Journey planner that optimises for price? Or at least avoids zone 1?
2
Interactive map for when and where to go
0
Summary of Flight Destinations & Frequency from a specified city