Why does London have 6 international airports?

Why does London need 6 international airports plus 16 general aviation airports? I read it in an article recently. Are all of these civilian passenger flights or is there a mix of passenger, cargo and military?

The London area has six international airports: City, Heathrow, Gatwick, Luton, Stansted, and Southend, all offering commercial passenger flights. Some are rather far away from central London, however, and more than 70% of passengers travel through Heathrow or Gatwick. There's also a much larger number of airports in the area primarily used by general aviation.

The simplest explanation for this number is that a number of the airports are more-or-less at capacity (or at least were before the pandemic). London City has a single very short runway, cannot be practically expanded due to geography, and has a nighttime curfew, so it's pretty much doing all it can. Heathrow runs at nearly its full runway capacity, to the extent landing slots sold in the tens of millions of dollars pre-pandemic; adding an additional runway at Heathrow has been an extremely contentious issue for many years. Gatwick also uses a substantial portion of its runway capacity, and was pushing plans before the pandemic to make use of an additional runway to accommodate more traffic. So that's three of the airports operating near capacity and yet still more travel demand: what's there to do but serve more airports?

Indeed, some of the less desirable airports like Luton are primarily used by low-cost carriers.

It's a lot of airports, but not uniquely. The New York (Newark, JFK, LaGuardia, Islip, White Plains, Stewart, plus charter flights in/out of Teterboro and other assorted options like the seaplane base) and Los Angeles (LAX, Burbank, Long Beach, Orange County, Ontario) metropolitan areas have roughly equivalent numbers of commercial airports as London. Cities with growing air travel demand can pretty much either keep expanding an airport with room to grow, distribute traffic among a larger number of regional airports, or embrace the megaproject of building a whole new airport somewhere farther away, and London has largely chosen the middle path.

This might be better suited for Aviation.SE, but I'll give it a crack anyway. It really comes down to two things:

It's fairly common for a city to outgrow one airport and need to build a second one further away. London has the rare distinction of having outgrown two airports simultaneously: Heathrow (in normal times, anyway) runs at full capacity and then some, with plans to build a third runway stuck in an endless bureaucracic quagmire, while Gatwick is stuck with a single runway and no way to expand that either. Hence the growth of Luton, Stansted and recently Southend, which basically absorb the overflow that LHR/LGW cannot, and that's how London got to 5 airports. Also, if you look at the map below, you can see that these five airports are in different cardinal directions, which also helps serve local passengers without requiring them to trek across the city. 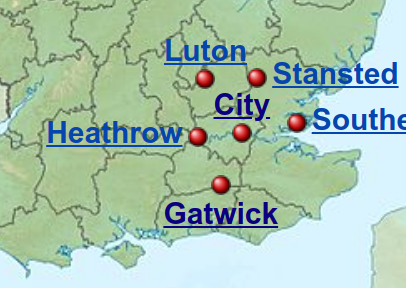 London's sixth airport, City, is a comparatively central and new operation developed primarily to serve business passengers doing short hops and willing to pay top dollar for the privilege. Its runway is too short to cater to larger planes, so it serves only a fraction of the big boys' flights.

And that's really pretty much it for the airports with scheduled passenger services. The remaining airfields in the greater London cater only to general aviation (private flight, hobbyists etc) and don't make much of a dent at all in that 180M figure.

Part of this creative naming and marketing/advertising tactics.

Low cost carriers try to avoid the higher fees of major airports like Heathrow or Gatwick. So they prefer cheaper airports that are in a less desirable place and don't have as good a connection to the city (Luton and Stansted). So when a low cost carrier decides to cover a popular market like London, they boost traffic at the more backwoods airports. They still want to be able to call it London and that determines the naming of the airport.

One of the more ridiculous examples is "Frankfurt Hahn" in Germany. This airport is closer to Luxembourg than it is to Frankfurt and it often takes two hours or more get from the airport to the city. It's just called "Frankfurt" so that the airlines can say they serve Frankfurt and their flights pop up in a Frankfurt-related search.

Ironically last time I flew out of Stansted I paid more for the bus from London to the airport than I paid for the flight!

Mostly due to the Second World War

Whilst Heathrow and Gatwick were already significant civilian airports before 1939, the other airports either were small local operations or did not exist.

During WWII, a huge number of new airfields were constructed. Smaller fighters could use flat grassed fields, but takeoff on a concrete runway was easier; and heavy bombers absolutely required concrete runways. Hundreds of substantial airfields were constructed around the UK. Distributing bases around the country allowed for faster local response times by interceptors and reduced the chances of damage by enemy bombing raids.

Post-war, the rising demand for air travel required runways for passenger aircraft, and it made sense to reuse existing runways from the war. Luton, Stansted and Southend airports are the legacy of this. A selected number of airbases were retained for use by the RAF (and later by the USAF), such as Biggin Hill and Mildenhall. Some were retained for private civilian operations, such as Duxford. The majority though were simply grassed over or removed altogether by farmers. I used to fly hang-gliders at Mendlesham, where one grass-covered runway (and an old Nissen hut hangar) still exists.

It is important to note too that branding of these airports as "London Stansted" and "London Luton" is relatively recent. Of course their proximity to London has not changed! but the rebranding was believed to make them more attractive as destinations for non-UK passengers.

This is quite a good video on the subject that I recommend. In short: London had built a whole bunch of airports for military purposes during the world wars, so London already had a lot of RAF airports to pick from to convert to normal airports.

After WW2, Heathrow was built, and Gatwick, as a backup airport. Luton airport existed since 1938, but it had still serviced other counties. However during the 1960s the demand for air travel skyrocketed, the current airports not being able to service all the load. Standsted was built. However it was farther away than Luton, which gave Luton the idea of marketing itself as London Luton airport.

London Southend ap was opened by a company (to make money, of course). Pretty much the same story with London city airport.

That's pretty much it, I hope I explained it well.

I'd say the reason is that Heathrow has just two runways. Schiphol has six, Frankfurt and Paris CDG has four. Thus there is a market for smaller airports. None of them has more than one runway. At the link you provided you can clearly see the priority between them: LHR > LGY > STN > LTN.

The reason is history. Basically, when airports were built around London, the airplanes were still small enough that all you needed was a grass field and a barn as a hangar. When longer runways became necessary, there was little room left. So London is served by six smaller international airports with a total of 7 runways.
In contrast, Schiphol is a single airport with 6 runways.

As Jay Foreman explains in an episode of his YouTube series Unfinished London, the first aerodrome, Hendon Aerodrome, was started in 1908. Other aerodromes followed. During both World Wars, the RAF (and their predecessor, the RFC), converted a lot of these to airbases.

As planes got bigger and runways needed to be longer, a lot of these smaller airports were no longer able to support those planes and closed. Heathrow was planned as a larger airport, but the advent of jumbo jets and the enormous increase in the number of passengers was not foreseen, so other airports had to come to their aid.

Most were RAF bases that were converted to airports. London City was built from scratch.

Not the answer you're looking for? Browse other questions tagged uk airports london or ask your own question.

12
How can I find the arrival gate for a flight?
6
Difference between London International (CIV) and London Eurostar (CIV)
2
Do I need a transit visa for a 4-hour layover in London? I have to change airports (Heathrow to London City)
61
Why are some pedestrian traffic lights covered in shades in London?
4
At what non-preclearance airports are there US DHS officers?
33
What are the closest international airports in different countries?
16
What airport has the fewest regular commercial flights?