Random station next to the J Canal St station of the New York City subway? 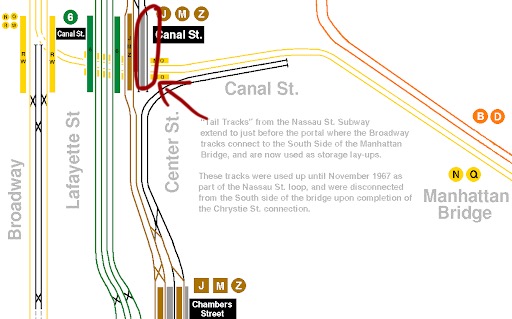 Look at the gray station circled above.

What was this station used for?

Can I travel via this station?

The wikipedia page seems to cover this:

Canal Street on the BMT Nassau Street Line has three tracks and two island platforms, but only the western island platform is accessible to passengers. The J stops here at all times and the Z stops here during rush hours in the peak direction.[38].

Formerly, Canal Street resembled a typical express station except that the inner tracks dead-ended at bumper blocks at the south end with a platform-level connection joining the southern ends of the two platforms. These stub-end tracks were last used prior to 1994, when the station served as the southern terminus for weekend J. After a reconfiguration of the Nassau Street Line in 2004, the eastern (former "northbound") platform was abandoned and now used as a storage area and the platform-level connection was removed, allowing the former southbound express track to continue south. The westernmost (former "southbound") platform remains in operation and both tracks provide through service with southbound traffic using the former southbound "local" track and northbound traffic using the former southbound "express" track. The former northbound local track is now used only for non-revenue moves, train storage and emergencies while the northbound express stub track was removed. The former northbound "local" track merges with the former southbound "express" track (the latter of which is currently the northbound track) south of the station.

Thatâ€™s quite a long quote, so to answer your specific questions directly:

what was this station used for?

The platform was used by northbound services on the J line, until the station was reconfigured in 2004.

can I travel via this station?

No. In one direction the line has been removed entirely. In the other itâ€™s still maintained for the networkâ€™s purposes (for example, moving trains around without disrupting passenger services) but is not used for any public services.

Not the answer you're looking for? Browse other questions tagged new-york-city train-stations or ask your own question.