How fast do the typical domestic travel jets (737, A320 family) actually go?

I kind of always assumed that jets like the Boeing 737 and Airbus A320 family travelled at their manufacturer's listed "cruising speed", because the manufacturer describes that speed as the speed at which it is "most economical" to fly them.

However, doing some rough calculations, that assumption does not seem to be playing out very well. For example, for flights between Boston and Miami the typical flight time by airlines is about 3.5 hours for both the 737 and A320 series. Since these times include taxi time, let's assume it is 15 minutes of taxiing at both airports. That means actual flight time (aloft) is about 3 hours. There are about 1100 nautical miles between Boston and Miami airports. If we divide 1100/3 = 366 nm/hr cruising speed. However, the A321 is advertised as having a cruising speed of 450 nm/hr. That's a pretty big difference.

I have heard rumors that airlines fly their planes extra slow to save fuel, but that kind of defies the "most economical speed" description of the cruising speed.

I guess another possible explanation is that the "cruising speed" listed is for an EMPTY plane (no passengers, luggage or other cargo), which of course would be pretty bogus, if true.

So, what's the story here? How fast do these planes actually go in the air on average (ignoring wind) in reality? Has anyone on this forum actually used a GPS on their phone or something to compute this?

You've made a number of incorrect assumptions in the question, which leads to your calculations being incorrect.

Firstly, the speed a plane flies at varies during different parts of the flight. It will be slower shortly after take-off and as the aircraft climbs to its cruising altitude, and then slower as it starts its decent and comes in to land.

Secondly, the flight distance will never be the same as the distance between the two airports. The "great circle" (basically "straight line", taking into account the world being roughly round) distance between Boston and Miami is 1,258 miles. Picking a random A321 flight from Boston to Miami, today's AA747 flight, the total distance flown was actually around 1,397 miles, including turns after take-off and before landing. 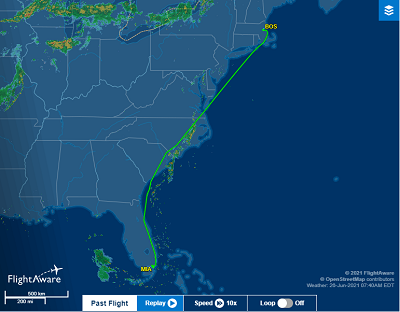 To put these two concepts into terms we're more familiar with, the straight-line distance between SFO airport and LAX airport is 337 miles, with much of the road being 70 mph speed limits. Thus we could conclude the trip will take a little under 5 hours (337/70). However plugging this route into Google Maps gives us a distance of 378 miles and over 5 1/2 hours - because roads aren't straight, and we won't be driving at 70 mph the entire distance.

Another assumption you've made is the phrase "ignoring wind". Aircraft cruise speeds are actually stated in terms of "air speed", which is the speed relative to the air around them. A flight flying at (say) 500 miles/hour will actually cover ground faster if it has a tailwind than if it has a headwind. E.g. if the aircraft is flying at 500 miles/hour, and has a 100 mile/hour tailwind, then the speed over ground will be somewhere around 600 miles/hour (this is an oversimplification, but close enough to make a point).

There are numerous web sites that will track commercial aircraft whilst they are in flight and show you their ground speeds (i.e. including the impact of winds) over time. The best of these for this is likely FlightAware.

FlightAware only makes data available for around 2 weeks without an account, but if you're reading this before early July 2021 you can view the details for the flight I mentioned above (including its track and speed plots).

That page shows the ground speed of the aircraft over time as:

Viewing the "track log" shows that the flight actually spent a fair amount of its time above the standard cruise speed for an A321 (as you mentioned, 450 knots, or 518 miles/hour):

If we jump over to Windy.com we can get a good idea on why it could do this. Setting the time to that flight's time, and looking at the winds at 34,000 feet we can see that the winds were blowing in roughly the same direction as the plane was. In other words, it had a tail-wind and thus on this occasion was able to reach a ground speed higher than the cruising speed. FlightAware doesn't report the actual air speed of the plane, but odds are it was around (or below) the normal stated cruise speed for the an A321. 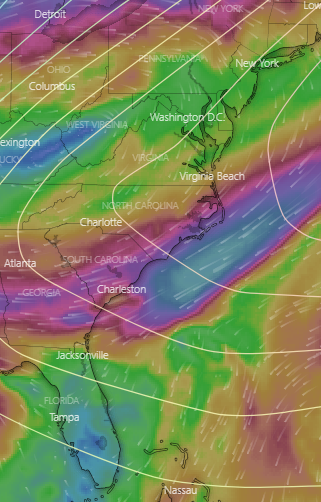 If all of that wasn't enough, there are multiple other criteria that can affect the actual speed the pilots fly at. The most economical cruise speed actually varies with altitude, with aircraft weight, and with a number of other criteria - so it can actually vary even over a single flight as the altitude changes, and as the plane gets lighter due to fuel burn. Additionally, aircraft can be slowed down or sped up by factors such as air traffic control in order to maintain proper spacing, or to try and get a late-running plane back on schedule.

As for your question about using a GPS, outside of looking at sites like FlightAware, yes, I have indeed done this. In fact, I've measured a Singapore Airlines Boeing 747-400 with a GPS travelling at 1297 km/hour (806 mph). This is actually faster than the speed of sound, and clearly the B747 is not a supersonic aircraft, so your first thought might be that this wasn't accurate - the the truth is that it was extremely accurate (the in-flight entertainment reported a speed 2km/hour different!).

The reason we were able to travel so fast is down to what I mentioned above - the combination of ground speed (what the GPS is measuring), airspeed (what actually matters), and tailwind. In this case we had a ~300km/hour tailwind, so whilst our ground speed was almost 1,300 km/hour, our actual speed through the air was only around 1,000km/hour (620 miles) - slightly above the normal cruise speed for a 747-400, but well below the speed of sound and within the normal speed range for a 747. (In this case we were travelling above normal cruise speed due to a medical emergency on board that resulted in the pilots wanting to get to the destination as quickly as possible).

There a bunch of factors that make it appear longer

How fast do these planes actually go in the air on average (ignoring wind) in reality? Has anyone on this forum actually used a GPS on their phone or something to compute this? 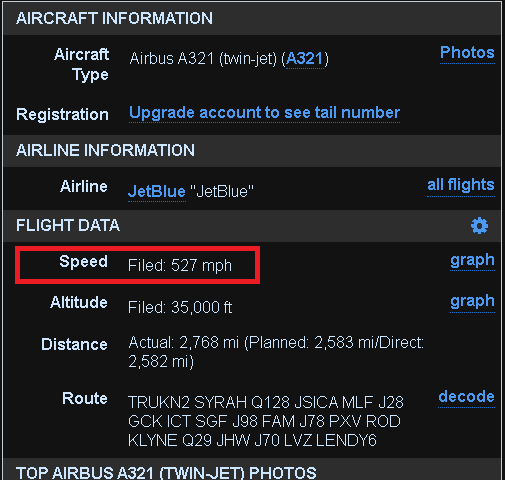 The speed graph is based on ADS-B data from FlightAware. More information here.

15
Are there any places in the world where you can actually "travel" with an airship / zeppelin etc? (Not just a tour or joyride)
25
Is there a way to check that the conditions on your plane ticket are actually what your travel agent said they are?
5
What if one family member doesn't have a photo ID for domestic air travel in India?
15
What does the flight jargon "fare class" actually mean? Is it the same as either "fare basis (code)" or "travel class"?
0
How can I determine the carry-on size / weight limits and restrictions for a US domestic flight?
1
Can you travel with fresh flowers on domestic flights in the US?
7
Which are the quietest seats the Boeing 737 and Airbus A320?
9
How fast is the Internet on board Iceland Air flights?
1
How can I view the typical flight prices between two airports prior to the COVID-19 pandemic?