Is there a faster route between Milton Keynes and Cambridge, England than taking a train via London?

It's ridiculous to find that Google recommends taking a train to London then to Milton Keynes. This really looks like a roundabout route. But I can't find any bus services that are faster than this route. Does anyone have a better idea? 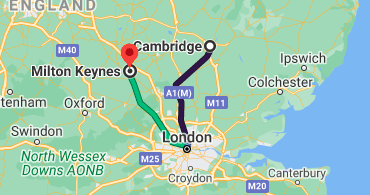 Short answer: no, there doesn't appear to be a faster route.

The main bus route from Milton Keynes to Cambridge is the X5 followed by the 905, operated by Stagecoach. Until recently this was a single bus route, the X5, but it seems this no longer runs the full route.

Google Maps puts this journey at around 2h30, including a 30-minute connection in Bedford. That's slower than the train (1h40) but probably a lot cheaper.

Neither of the two main intercity bus operators, Megabus and National Express, seem to operate this route directly. National Express suggest a 5h connecting itinerary, while Megabus don't seem to serve Milton Keynes at all.

Some time in the future, the East West Rail project may lead to faster trains on this route, but as of 2021 that's nowhere close to completion.

There used to be a direct bus on this route, the X5 (Oxford - Bicester - Milton Keynes - Bedford - Cambridge), but it was apparently withdrawn in August 2020. I haven't travelled this in quite a while, but I used to take the X5 a lot when I was younger.

Google Maps suggests the two trains are about 1h45, depending on exact timings, so it does sound like that's the faster option. (The old X5 would have been about 1h50)

Have you considered a taxi?

I'm not sure if that would be considered Public Transport, but there is at least one MK based company offering a connection 'from 75 GBP'.

This seems comparable to a full-priced, off-peak day single, which is 60.40 GBP [edited; see comment for details] according to Trainline. If multiple people are travelling, a taxi may actually be the cheaper option.

As a public transport, and especially trains enthusiast, this would not be my preferred option, but for convenience it may be hard to beat.

In addition to the taxi suggestion, depending on how long you're planning to spend in Cambridge, you may be better off actually hiring a car. If you book in advance and spend some time searching, and don't need a large car, you may be able to get a car for under £40 a day. Even adding the cost of petrol, if you're going for a day, i.e. returning the within 24 hours of pickup, that may be fairly cheap and fast, too.

EDIT 2: To address the second of Willeke's comments, there are also car share schemes that you may be able to utilise. Zip car is the most popular one, but there are also Virtuo, EasyCar club, E-Car club, Hiyacar and a number of others. I haven't check which ones are available in Milton Keynes.

The UK rail network is pretty London-centric and that area is particularly bad, In particular, once you leave London, there are no connections between the east coast and west coast mainlines until you reach the line that goes from Nuneaton to Peterborough (and on to Cambridge via Ely). From Milton Keynes that is an even more roundabout route than going via London. By rail Milton keynes to Nuneaton is around 47 miles, Nuneaton to Cambridge is around 116 miles, Milton Keynes to Euston is around 49 miles and Kings Cross to Cambridge is around 53 miles.

You can in principle get between the West and East coast mainlines in north London by taking the Watford DC line to Willesden junction, followed by the North London Line to Highbury & Islington and then the Northern City line to Finnsbury Park, but the extra interchanges and slower trains mean it is not a good choice compared to going into the city center.

Trains move significantly faster than even the fastest buses/coaches (both because of higher top speeds and because they don't have to deal with traffic), so even with a fast bus/coach service a roundabout train route can be time-competitive with a more direct bus/coach route. Add to that it appears from other answers that the fast direct bus has been cut back leaving only a regular local bus service for part of the route and it's not surprising that the train wins even with the roundabout route.

There is a currently ongoing project called "east west rail" which if/when it is eventually completed will link Oxford (served by a branch of the Great Western main line) to Norwich/Ipswich via Bicester (on the Chiltern main line), Bletchley (on the West coast main line), Bedford (on the Midland main line), Somewhere on the East coast main line in the St Neots/Sandy area and Cambridge effectively linking all the main lines north of London.

The Oxford to Bicester section of the route reopened in 2015, and the sections from Bletchley to Bedford and Cambridge to Norwich/Ipswich never closed. The section from Bicester to Bletchley is currently under construction.

However the Bedford to Cambridge section (referred to by east west rail as the "center section") is still in the consultation stages and is intended to be built on a completely new route because key parts of the old route have been lost to development, so don't expect it to open any time soon.

Not the answer you're looking for? Browse other questions tagged public-transport england cambridge or ask your own question.