What is the likelihood of appearing on the TV show 'Border Security: America's Front Line' if I travel to the US?

So I'm planning on travelling to Los Angeles from mid-Summer to the end of this year after I receive a COVID vaccine.

I've always wondered how normal travellers end up on those shows because I've travelled in and out of a few airports in the U.S. (LAX, JFK, ATL, ORD) and I've never once seen camera crew.

If I was to be captured, would I need to give my consent or is consent not necessary as I'm in a public space?

usa customs-and-immigration lax
Share
Improve this question
asked May 18, 2021 at 18:57

The vast majority of the scenes aired on any of the Border Security shows (I've watched USA, Canada, Australia, and a few South American ones) take place in secondary. I'm a frequent traveler and I've been in secondary only twice in over 20 years. That's where a tiny fraction of travelers go after talking to an officer at a booth. Typically they have a good look through your luggage, ask more questions, look at paperwork in detail, call people such as the friend you're visiting, snoop through your phone, and so on. At least that's what you see on the show. The first time I was in secondary someone angrily asked me what I was doing there, and when I said someone told me to "go down there and turn left" they sighed, looked at my boarding pass and told me to leave. The second time (at US preclearance in Toronto) they made me wait, searched my carryon, threatened to take away my nexus card because I had caramels and had said I didn't have food, then let me proceed after about a half an hour delay.

Border Security do some "atmospheric" filming out at baggage claim and such. When they are doing so there are signs around. This news article includes this picture of the Canadian sign; the US one is probably similar. (Note: the Canadian series stopped filming in 2014 after accompanying CBSA officers out of the airport on a "raid".) 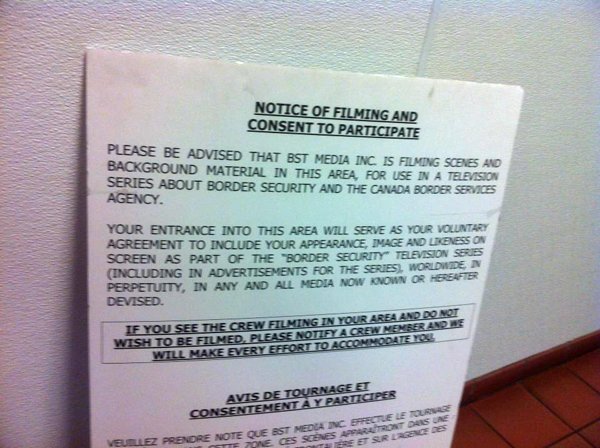 I have been in YVR and seen the signs but not seen the crew. The atmospheric filming generally never shows faces or voices of anyone other than the customs officers.

In secondary, I believe if you don't consent they show the footage with a blurred face and disguised voice. I could be wrong: perhaps those people only consented on the condition of the blurring and disguising, and there are others who don't consent and aren't broadcast.

Your chances are smaller than the chances of going to secondary, so I would say "very small." Literally millions of people pass through those airports every year and perhaps 10 or 12 people per airport per year appear on the show.

What is the likelihood ?

For all practical purposes it's 0. The US has about 80 million visitors each year. Maybe 100 or so appear on the show so it's almost literally "one in a million" (or 1.25 in a million to be exact).

The vast majority of people that appear on the show are doing something "unusual". If you are normal traveler with nothing that may trigger attention it's even lower than the number above.

Not the answer you're looking for? Browse other questions tagged usa customs-and-immigration lax or ask your own question.

8
What kind of masks are the British border control officers wearing at the Gibraltar Border?
10
What line does a Green Card holder take at the US immigration at the airport?
10
USA car rental one-way fee
18
What is the function of UK Border Force agents at UK airports between departures security and the shops?
1
What additional documents should a South American going to the US bring to the border?
71
What happens if you declare more than $10,000 at the US border?
6
What is the abbreviation standard that the U.S. Customs and Border Protection's travel history is following for the locations?
3
What is the difference between "Information Regarding Entry and Exit" and "travel history" for the U.S. Customs and Border Protection?