Is this train cancelled or not?

I see two conflicting information on my itinerary, on Trainline UK, one saying that train is cancelled and one saying "on time". 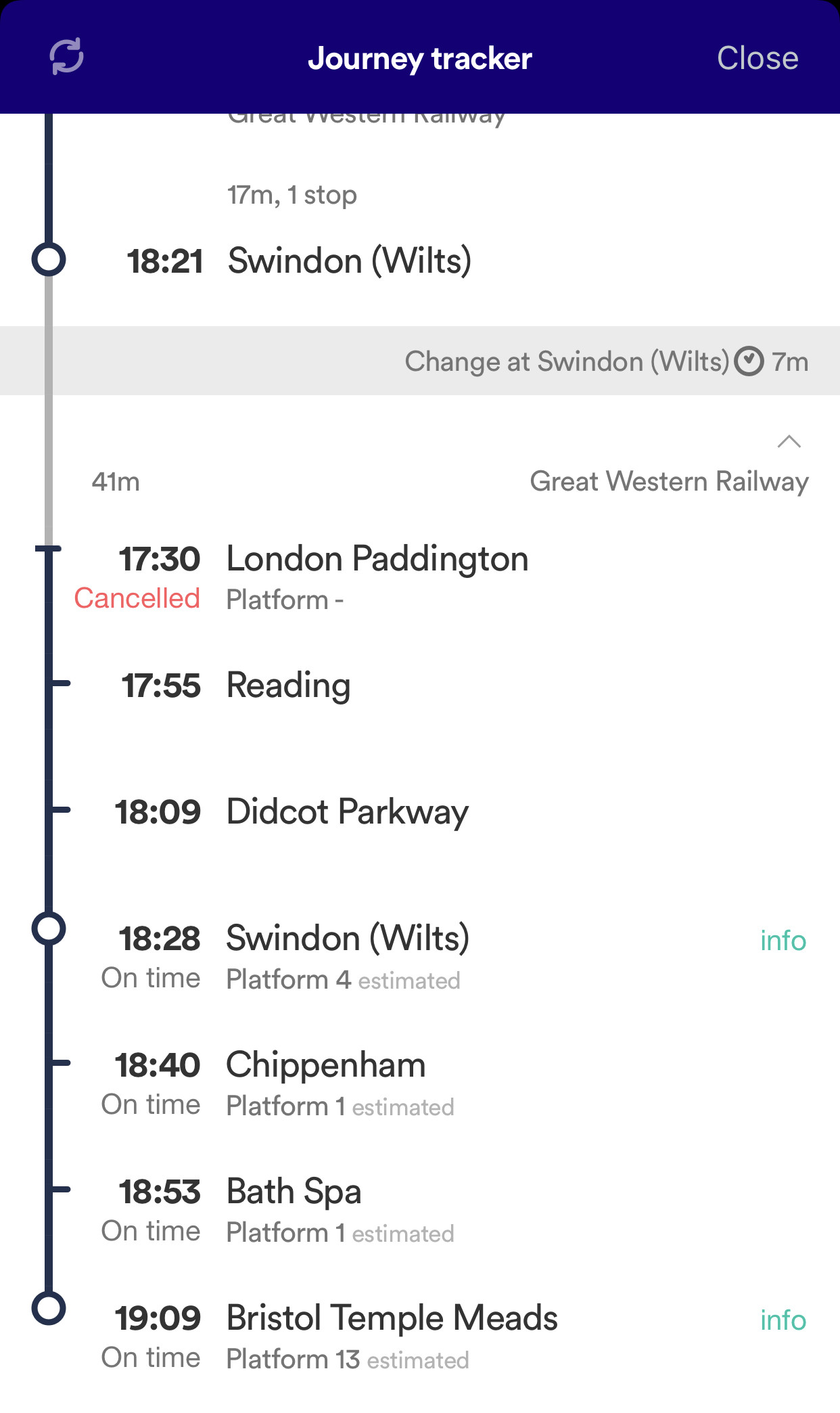 I'm supposed to change on Swindon and head over to Bristol Temple Meads. However, the itinerary says that the train starting from London Paddington is cancelled, while the Swindon train says "on time".

This is rather confusing, especially because on top of the ticket it says Train Cancelled: 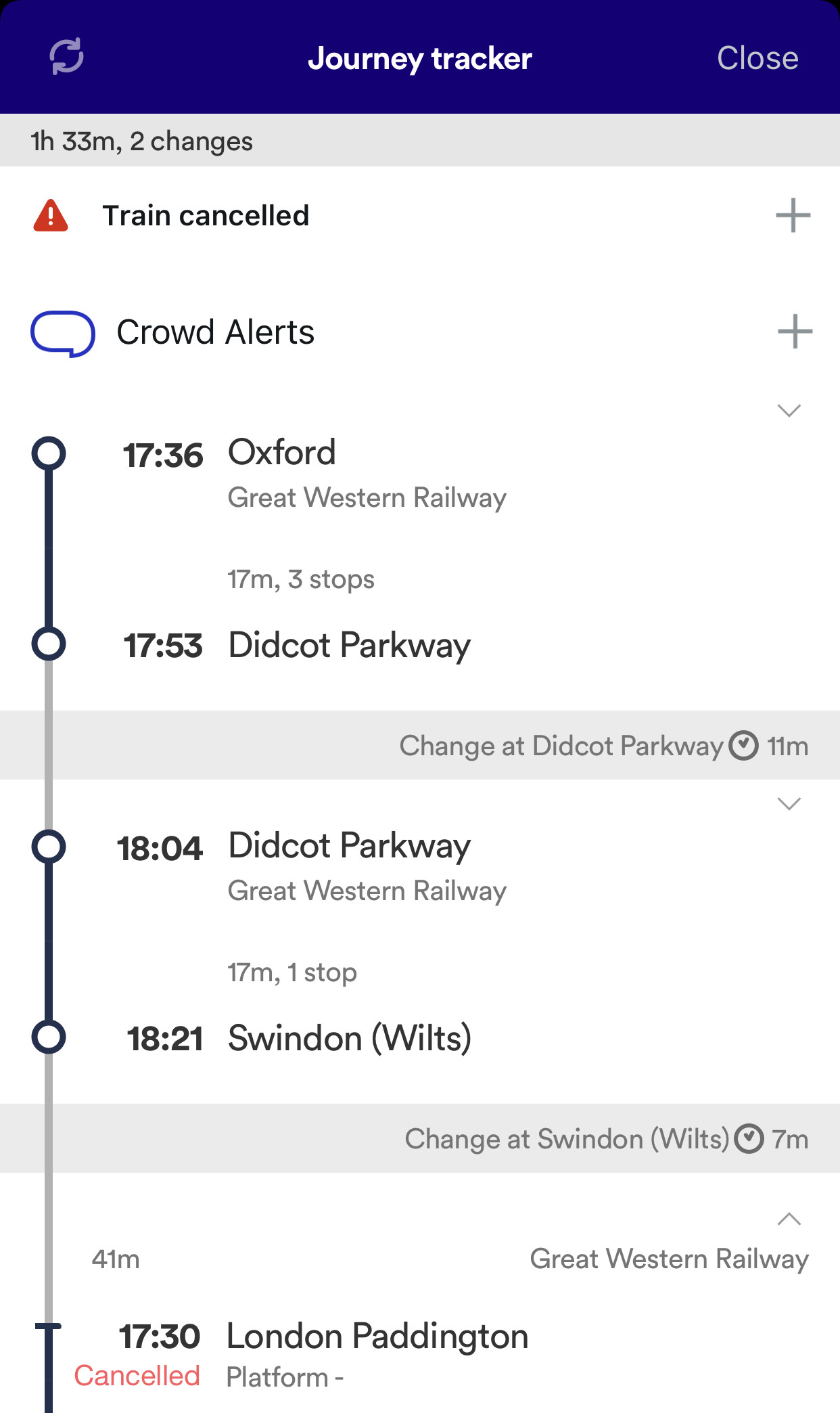 Does anyone know if my journey will be unaffected? My guess is that the train from London Paddington is cancelled but the train does run as per normal on Swindon...

Many thanks in advance.

uk trains
Share
Improve this question
edited May 14 at 21:38

I'm making the assumption here that this is for today.

The 1804 train is cancelled (see "Cancelled from WTT today 14th May 2021 only" on the left). Unfortunately GWR have had serious issues with their fleet this past week, and while some trains are now back in service, many services are still altered or cancelled as they still have significantly fewer trains in service than normal. I'm not sure why the 1804 is not showing as cancelled on Trainline.

However, there is a replacement service leaving Didcot at 1808 which arrives at Swindon at 1826.

From there, this connects onto the 1845 CrossCountry shuttle service to Bristol Temple Meads. This arrives at Bristol at 1928.

However, in practice you will likely to be able to make the 1829 GWR shuttle service to Bristol Temple Meads, even though this is not a valid connection officially (minimum connection time is 5 minutes at Swindon). If you can make the connection though there's no reason you shouldn't. The connection is across the platform so you don't have to use the subway, be towards the rear of the train for an easy nip across to the train awaiting in the adjacent platform at Swindon. This service was originally the 1828 from Swindon (1730 from Paddington) but has been altered and retimed slightly to start from Swindon. This sort of explains what you see in The Trainline, though I don't know why the 1804 isn't showing as cancelled.

Because of all the disruption your tickets will be accepted on these alternative services.

(If you're curious, I suspect the weird display in The Trainline app is caused by the train being cancelled in the timetabling system (via a VSTP entry) but not in the real-time running system (TRUST). I suspect with all the last-minute alterations this was missed in error).

EDIT: I just realised I was looking at a different train. Nevertheless my point still stands as this other cancelled train was also part of your itinerary. The train in question was technically not cancelled; it was altered to start from Swindon and re-timed slightly (it's the 1829 service linked above). But the point is moot when the connecting train is actually cancelled...

Not the answer you're looking for? Browse other questions tagged uk trains or ask your own question.

12
What happens if I miss my Eurostar because of a delay in a domestic train to get to it?
11
Where was this train photograph taken?
4
With an Advanced Purchase UK train ticket, what happens if your train is cancelled?
6
Will I get refund if train was cancelled
12
What does "The following London stations are available for travel with the chosen ticket" mean?
4
travel from Gothenburg C to Copenhagen airport (CPH)
4
Flight canceled due to shortage of crew caused by bad weather
13
How do I calculate the required time between London Terminals?
8
Landing in England, Staying in Scotland - which rules should I follow? (July 2021)
28
Is it possible to do a round-the-world trip by train and passenger ship only? Missing link for crossing the Pacific