What is the drinking age on American operated airlines to Canada?

I live in Ireland and was hoping to go with my friend to Los Angeles in December of this year and it seems that the American carriers (United Airlines, American Airlines, Delta) are cheaper than British Airways or Aer Lingus

He just turned 20 last month and I'm 22. It will be a long flight from Dublin to Vancouver so we want to drink. The thing is, I'm not sure what the rules regarding the purchase of alcohol are on flights.

When I went to New York 2 years ago during Christmas using Delta, I asked for alcohol and the flight attendant denied me as I was 'under-age'. By this I take it that the minimum age on American air carriers is the same as the one in the U.S, 21yrs old.

I was told it's determined either by the airline carrier that one is travelling with or the minimum age in the destination/origin country.

Even though I could drink in Ireland as the age is 18, I was seen as underage. What would the age limit be if travelling to Canada from Ireland?

All of United, Delta, and American have set a policy of a drinking age of 21.

But as others have noted, the relevant question here is the policy of the airline actually operating your flight, which may well be a different airline, so you'd need to figure out your proposed itinerary and research the policy of the operating carrier. A European or Canadian airline may have different rules.

The limits on serving alcohol are going to be mainly governed by the the company rules of the airline operating the flight. There may be additional restrictions from the country of the airspace you are in.

On a flight from Dublin to Vancouver you will be in the airspace of only Ireland or Canada (possibly Greenland). All of those permit drinking by 20 year olds, so you are both fine from a legal point of view.

An airline may choose to follow the rules of its parent nation, or any other rules it chooses. Canadian or European airlines are unlikely to forbid serving alcohol to a 20 year old. A US one might. The only reasonable way to find out is to ask.

Note that the airline that sold you the ticket may not be the operating airline. You should be able to ask which airline is operating the flight though.

This is sort of a comment but it has outgrown in length the comment box. For the question directly: we do not know, it depends on which airline are you flying -- however, you can deduce that from the airport where you are transferring. Here's how.

the right or privilege, in respect of scheduled international air services, granted by one State to another State, of transporting traffic between the territory of the granting State and any third State with no requirement to include on such operation any point in the territory of the recipient State, i.e the service need not connect to or be an extension of any service to/from the home State of the carrier.

ICAO characterizes all "freedoms" beyond the Fifth as "so-called" because only the first five "freedoms" have been officially recognized as such by international treaty.

In short, no such thing exists. A Canada-EU nonstop flight can only be operated by

In theory, a US carrier could do a Fifth Freedom flight but typically such flights exist because the home airport is very far away like Singapore or Cook Islands and are pretty much forced to land inbetween. A relatively recent (pre-covid) list can be found here.

And all this matters because now we now know the transfer airport is home state for the carrier as it doesn't have (or use) the freedoms to do otherwise. If it's a US airport then it's a US airline and you can check Wikipedia which airline has a hub there to figure it out, like Dallas is AA, Minneapolis is Delta and Houston / Chicago / Newark is United (luckily enough there are no direct flights to JFK which is both a DL and an AA hub). If it's an EU airport then the operating carrier must be either a Canadian or an EU airline (Air Canada, Westjet and Air Transat are Canadian so they are always a possibility, Amsterdam can be KLM, Frankfurt can be Lufthansa, Paris can be Air France, London can be British Airways).

Stealing an infographics from https://transportgeography.org/contents/chapter5/air-transport/air-freedom-rights/ (first is airspace transit, second is technical stop, the rest are self explanatory) 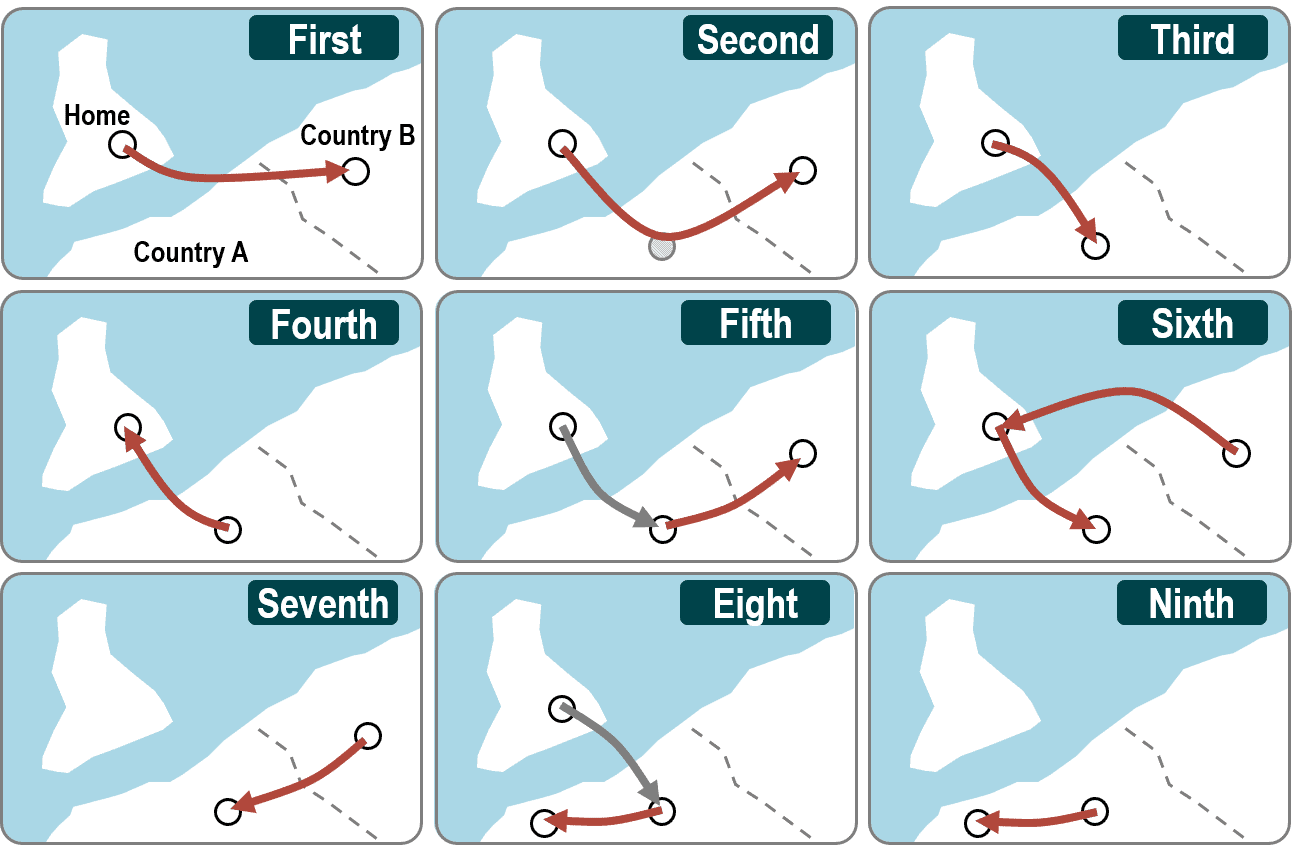 Because the airline may apply its own rules, or the rules of a jurisdiction over which it flies, or departs from, or lands at, the best answer will come from the operating carrier, the airline that actually provides the airplane and crew.

Not the answer you're looking for? Browse other questions tagged ireland american-airlines alcohol delta-air-lines or ask your own question.