What can security officials do when they suspect my checked baggage?

Chris S answer in this question recommends against packing items such as desktop computer because they can look suspicious to the security officials.

Assuming I lock my luggage, what can they do if they suspect the baggage? Are they allowed to break the luggage without my permission?

The definitely can. TSA works with lock companies to develop locks they can remove without damaging the luggage. Which also states that they may choose to open your bags. I am pretty sure that other agencies providing security at airports have similar capabilities.

Assuming I lock my luggage, what can they do if they suspect the baggage?
Are they allowed to break the luggage without my permission?

Similar question: Where does a 600 pound Gorilla sit?

If by "security officials" you mean Customs Officials processing passengers in or out of a country then the general rule is that they can do essentially anything they wish to with your bag and in some cases they may do more than they are allowed to.

Actual regulations re locked bags will vary by country but you can be more than certain that if your bag is locked and outgoing customs officials suspect it contains dangerous or unauthorised contents then it will not be allowed to progress unexamined. A lock may be removed (always an easy task), the bag may be rejected and returned to the check in area or put in storage or confiscated, and it may be destroyed with malice aforethought. All major airports have means of dealing with suspected explosive devices.

Detonation of bags left in public spaces occurs regularly if not especially frequently, and a checked in bag may be similarly destroyed if the risk is deemed to justify it.

I took the photo below in an airport "somewhere in China". Almost everyone walks past this without being aware of what it is. I call it a "Police Mortar" :-). The writing just says "Police". It has a two concentric cylinders, no doubt of high grade steel with some sort of buffer between. Inner cylinder is generously sized to accommodate YOUR bag. They assume that you will be providing the "charge" but with one of these they can add their own starter to see what happens when there is no roof overhead to make a mess of. Spring mountings accommodate recoil, hopefully. Throw it in, hitch it up, tow it away. Somebody wants to talk to you about your missing luggage. Just follow the column of smoke to the far side of the carpark. 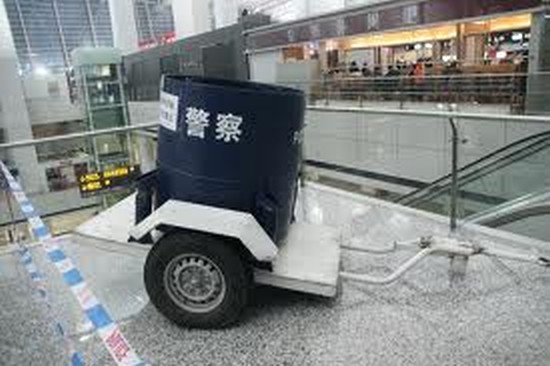 As I transited Australia heading for Asia I was accosted by two pleasant people. They invited me to come to a small side room and have my carryon luggage and my general person sniffed for explosives using a magic machine supplied for that purpose. They made it very clear that compliance was entirely voluntary and that I was under no obligation whatsoever to comply. I asked what would happen if I declined. They said "Then, Sir, your journey ends here." I complied.

The Chinese during the Olympics when I was outbound from Qingdao (Olympic sailing venue) took pssengers about 30 at a time into a locked room, went over everyone with wipes that presumably pick up residue, then placed the wipes in an electronic analyser. Getting the all clear they released the roomful and brought in the next batch. I've wondered what would happen to the journey plans of the 29/30 in the room if 1/30 caused a positive test.

You can expect that your checked baggage will be being given at least as careful a scruitiny as in these cases.

All countries will have regulations that allow security officials to open and inspect your bags. The odds of them doing this due to a desktop computer being in the bag is very low, but it's always possible.

In the USA, locking your bag with a non-TSA approved lock (ie, one which they have the ability to open) will significantly increase the chances of your lock being removed and the bag inspected.

Back 10 years ago I flew Melbourne -> LA -> Virginia and checked some expensive camera equipment in a Pelican case locked with Pelican locks. On this particular trip I was so tired when I arrived in Virginia that I didn't notice that the locks were missing from the Pelican case and shoved it in the cupboard when I got home. (I was also unfamiliar with the then new TSA policies)

A month later I pull it out , see the locks are missing from the outside and open it up to find the TSA leaflet explaining how they had cut my locks off to do an inspection .. and had thoughtfully left the remains of the locks in the case. It really annoyed me that the TSA had broken the security of my case and had not re-secured it with something (zip ties, metal wire, anything). This inspection happened sometime after I had passed through Immigration/Customs at LAX and then re-checked my bags on the domestic flight to VA at the drop-off point at the exit of Immigration/Customs.

I believe that as a result of the TSA action I had a camera stolen from that case. Fortunately the thieves were dumb - in a case filled with $2500 of 35mm film camera equipment (including my all time favourite lens), they stole a $100 digital camera.

In my case I had discounted rule #1 for luggage and flying:

I don't have any evidence for this but I'm pretty sure on my last flight to the US in 2012 I saw some note that if the TSA suspects something in your checked luggage they have the right to open it. If that means that they'll have to destroy any kind of lock then that's what they'll do. This matches a warning in a travelguide I read a few years ago which also states that on flight to or from the US you should only lock your suitcase with a TSA approved (and therefore TSA-unlockable) lock.

Not the answer you're looking for? Browse other questions tagged usa luggage airport-security electronic-items malaysia or ask your own question.

9
Do I “Need” a luggage lock in the US?
20
Can one carry an internal hard-drive in cabin-luggage?
9
How to deter theft of checked baggage at baggage carousels?
2
Obtain Export Certificate from Indian Customs for items in checked baggage before Check-In?
2
Traveling with Computer Components in Carry-On
2
What is the likelihood of TSA checking a package which has a desktop computer in it?
6
Soft-shell spinner suitcase with brakes (and external side pockets)? Does it exist?
80
Asking same flight customers if they would agree to put my knife in their checked luggage
3
Checked baggage through TSA carry-on security when late for check-in?