Where can I go to see the Earth is round?

There are many ways to see that the Earth is round. Some of them require traveling to specific places.

Question: Where can I go, besides Warren Dunes (see (3) below), to see that the Earth is round in a fun, easy, and convincing way?

Some examples of ways to see the Earth is round:

There's a lot to consider about what makes this so convincing:

Here's a picture of the beach with the dune behind it. Unfortunately I didn't take pictures when I went of the skyline, but here's a news article indicating I'm not the first to consider the round-Earth implications of the view from Warren Dunes, but also indicating that things may be more complicated than I realized (I tentatively think that even if there's significant temperature inversion affecting the view, the fact that the view changes as you go up and down the hill is still pretty good evidence that the surface of the lake is curved.)

Tentatively, it seems that the ideal location will satisfy the following basic criteria:

(Mountain settings are again problematic for (5) -- the surrounding mountains modify where the horizon is so that it's not set by the curvature of the Earth. Similarly, (5) is an annoyance with the boat example because waves around the boat modify the horizon. In the Warren Dunes example, waves are still present, but they are way smaller than the skyscrapers we're using as an observing target, so they can be neglected more comfortably.)

In addition, there are a few more specific criteria:

(It occurs to me that there are definitely a lot of places you can get a similar effect by changing your observing position horizontally rather than vertically. The problem with these is that you necessarily have to move horizontally a much bigger distance than is required in this "vertical observing platform" scenario. This makes it less convincing, even if you're in a car or something and so it doesn't take much time. It's less convincing because necessarily there's a lot of other things changing about your view at the same time which are distracting. You might also start worrying about atmospheric changes as you move, etc.)

For a start, I bet the Great Lakes afford some other similar opportunities. E.g. from the docks in Toronto, you can see a couple of American cities across Lake Ontario. Maybe going up and down the CN tower or something could allow you to see a similar effect, but I don't actually know (and as noted in the comments, it likely fails some of the "ideal criteria"). I think there are probably examples not requiring water or skyscrapers, but I haven't come up with any.

I asked an early form of this question on Skeptics.SE. It was closed there as not being in scope for the site, but Nate Eldredge suggested it might fit here.

Which distances / heights work for a Warren Dunes-like demonstration?

There are several variables at play in the above setup. Let's consider the most basic ones to get a feel for what's going on. That is, we'll see how it works when we ignore atmospheric effects, which I don't feel qualified to comment on.

Assume the ground is basically "flat" (i.e. does not deviate from a perfect sphere) apart from the observing platform and target -- as long as there are no other hills around, this makes sense. Then geometrically, if you look out from a certain distance above the ground (say ~ 2m if you're standing on the ground, or maybe ~100 m if you're standing on the platform), the horizon is the maximum distance away where you can still see the ground. The distance to the horizon is set by basic trigonometry, which we'll get to in a minute. But the phenomenon at play here hinges on observing not the ground, but the observing target, which pokes out above the ground, so that you can see it even when it's farther away than the horizon. What we really want to know is: If I am observing from a certain height h above the ground, and I'm looking at something of height H, how far away must H be before it's too far past the horizon and I can't see it anymore? The thing to notice is that the situation is symmetric: the observing target disappears underneath the horizon precisely when my line of sight to it just skims the horizon. So:

So it boils down to the distance to the horizon. After drawing a picture applying the Pythagorean theorem, and dropping some terms which are small because the Earth is big, we see that:

So as you vary h by going up and down the observing platform, the minimum height H above the ground that you can see at the observing target changes according to this formula. The inequality ensures that the observing target is actually beyond the horizon to begin with. This formula is not bad, but it is complicated enough, and the amount of change in H required to be obvious to the naked eye is dependent enough on further details, that I'm not sure what more to say other than "now just plug in numbers to see what kinds of setups will work".

The actual curvature is not directly visible from anywhere on Earth's surface, not even from Mt. Everest:

Earth’s curvature can't be visually seen from any location on the ground, even from Mount Everest. Studies show that the threshold altitude for seeing the curvature is about 35,000 ft (10,668 m). Even then, it's barely discernible and the observer must have a wide angle field of view. Only aircraft flying much higher (commercial jets sometimes climb above 40,000 ft or 12,192m) offer an easy view of the curvature.

If you want to ask for the sort of indirect proof where the curvature works at obstructing some (part of an) object and/or stops doing so when you get to higher elevation...

Here's an equivalent that doesn't require your own motion at all (nor is the object moving, but it is "at sea"): 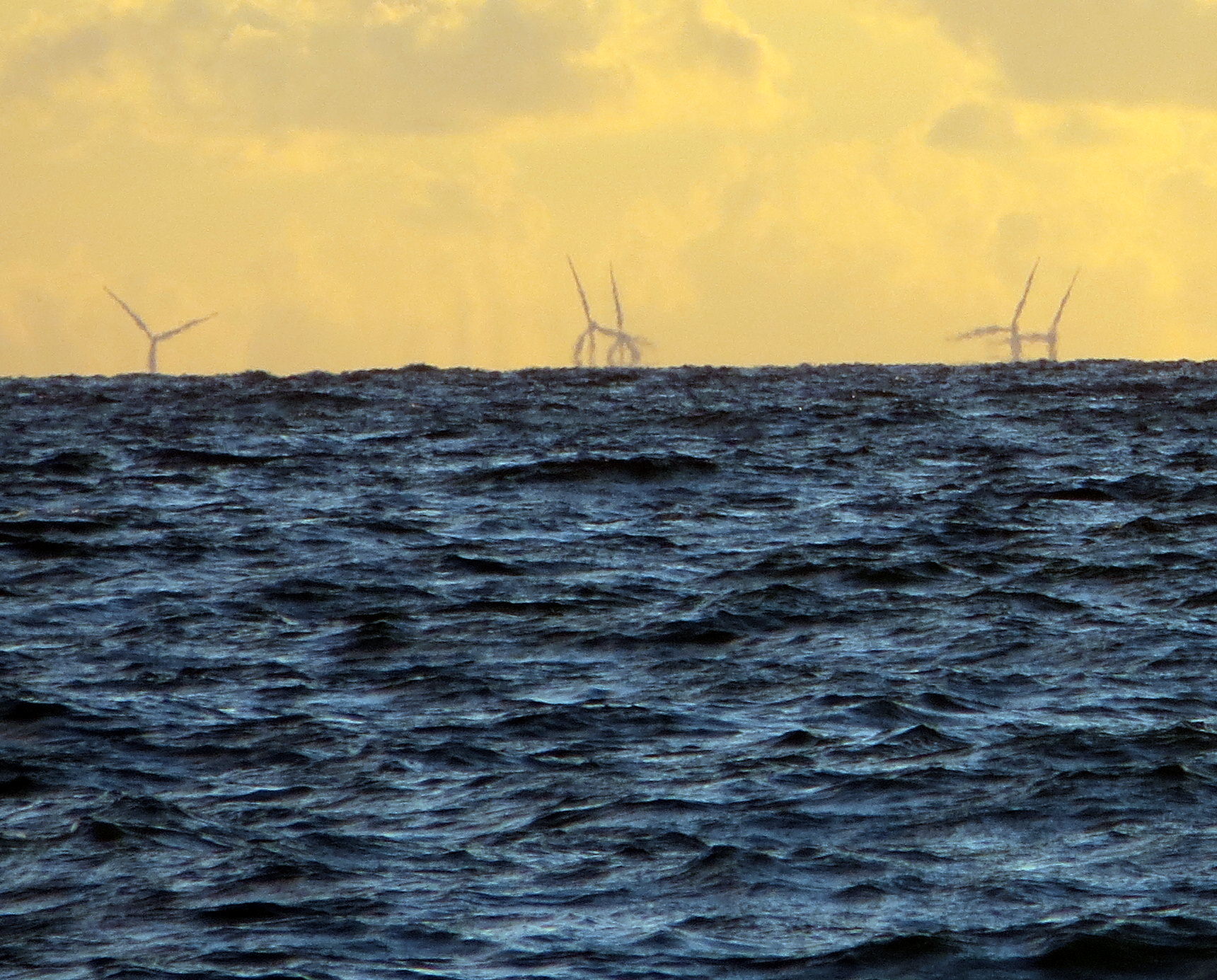 DanTysk offshore wind farm, seen from Rantum Beach, Sylt. [Germany] Camera was on top of sand dune, about 10 metres above sea level. Turbine blades are 60 metres long. hub is 100 metres high, About 80 metres of hidden height, clearly visible as the blades swing down and "through" the sea.

A somewhat similar view from Juist (also Germany), can be seen in this video. (The wind farm may be a different one.) 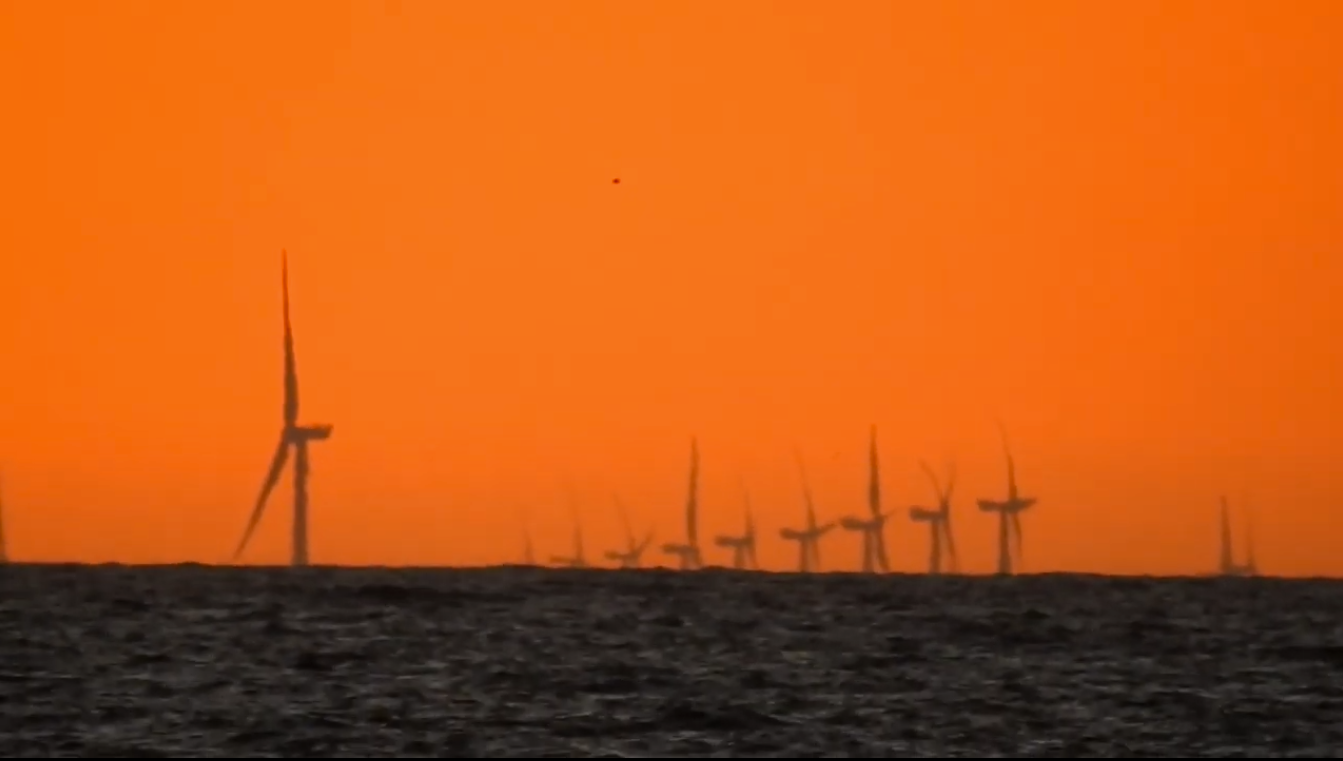 (My German isn't good, but this video was amusingly/apparently posted by a flat-earther.)

Alas both of these require zoom optics or "20/20" eyesight, the windmills are tiny, tiny to the naked eye.

There are also some views that more or less are equivalent to a Bedford Level experiment, meaning they rely on a set of aligned objects of the same height. See this thread for a number of pictures of 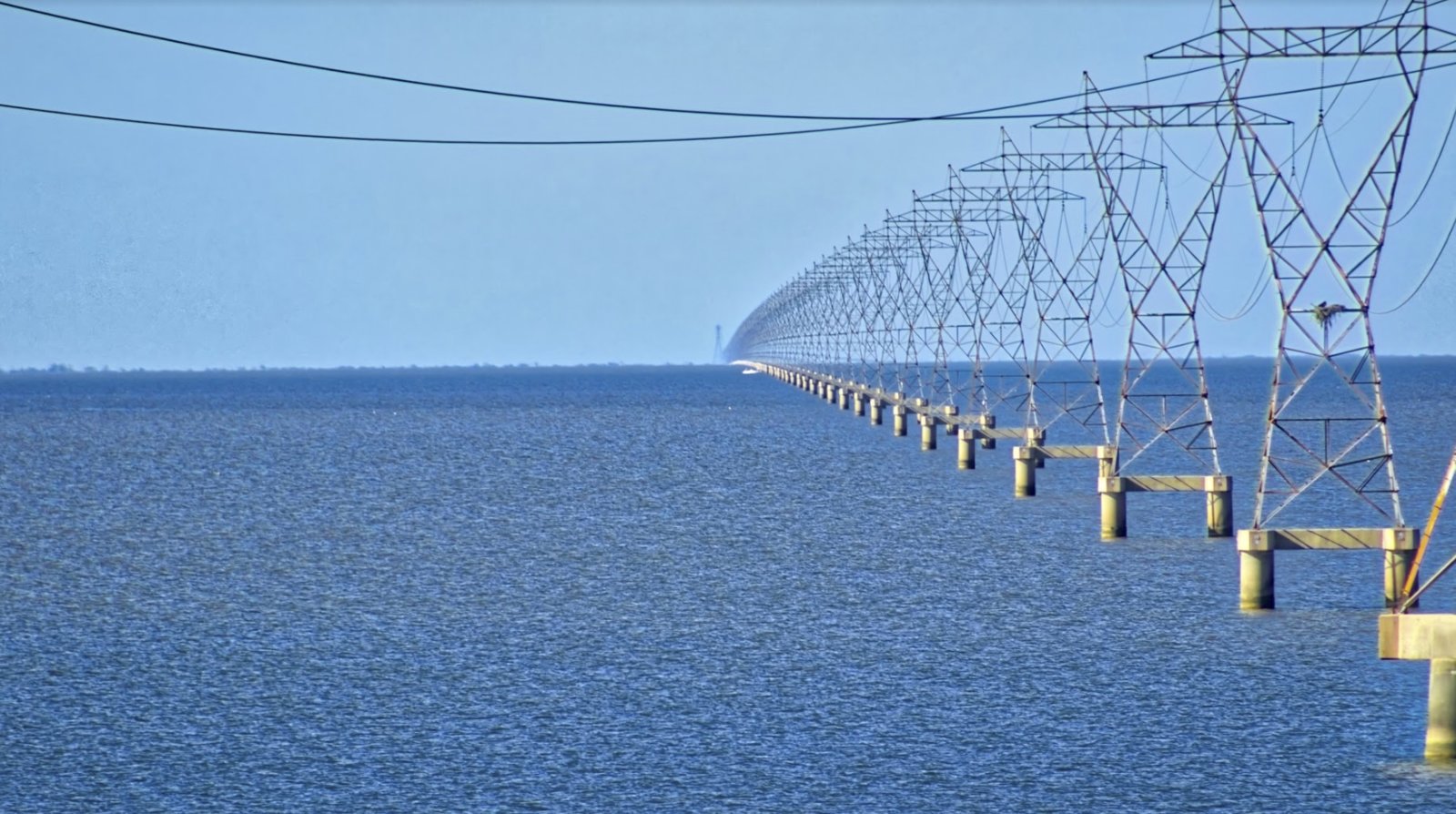