I'm reading about the Seiryu Miharashi Station in Japan, which is a recently (2019-03-19) opened train station where passengers cannot enter or exit the platform, except via the train, as the platform's sole purpose is the view to the nearby river: 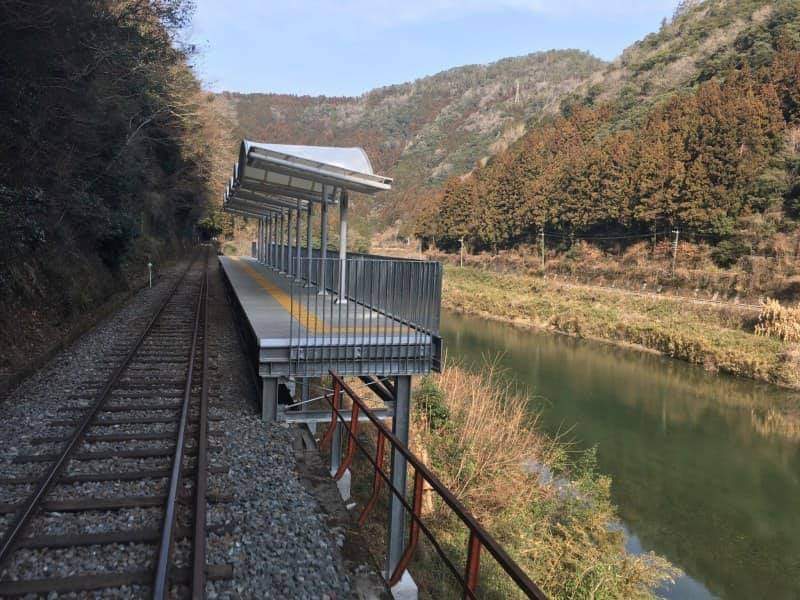 Eigerwand on the Jungfraujoch railway line used to be a stop for the trains before 2016. Passengers could get down and move to specially carved windows to view the mountainside. The only other way to access the station except the railway line was a door that opened on the mountain but you can't use that without specialist equipment and climbing skill. As of 2021, the trains no longer stop here.

The next station Eismeer may also qualify as its purpose is also to allow passengers the view of the mountain/glacier. I am not sure of there is any access point to the station except the railway line.

Yoshioka-Kaitei Station, located within the Seikan Tunnel between the islands of Honshu and Hokkaido in Japan and once the world's deepest station at 149m under sea level, would have fit the bill: the only way out were emergency escape shafts closed to the public (except in emergencies, of course). 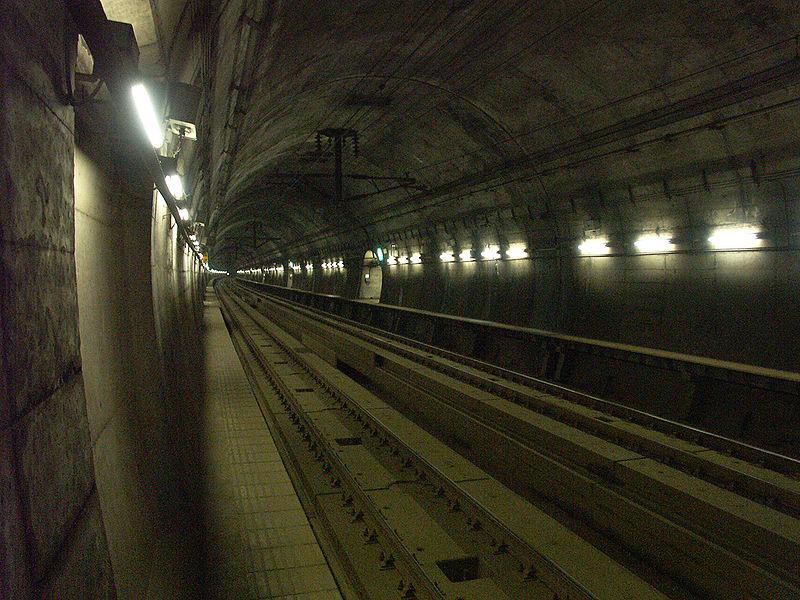 There wouldn't be much to see deep underground (see above), but there was a small museum about the tunnel that was open to the public. Alas, the station was permanently closed in 2006 to make way for the Hokkaido Shinkansen bullet train upgrade.

Yoshioka-Kaitei had a twin station, Tappi-Kaitei, but this had an underground cable car to the surface so it doesn't quite qualify.

Kjofossen on the Myrdal to Flåm line in Norway is similar - the train stops at a platform from which you can view a waterfall. I believe at times it is spectacular, when I was there there was only a trickle in it.

I don't believe there is any way off the platform except by train.

Just a few minutes before finding this question I was seeing a video about the Newhaven Marine railway station.

In short, the station activity was linked to ferries that crossed the English Channel. With the building of the Eurotunnel, that activity went down to the point that the station no longer made sense, and passengers were directed towards nearby Newhaven Harbour station.

But legally it still had to be serviced, so a train will stop there but the access is blocked so nobody could actually enter or leave the train¹. In fact, it seems that there is a sign at the station telling would-be travellers that they can call for a taxi to take them to Newhaven Harbour station to board the trains there and that the railway company would pay the fare. Since the distance is a two minute walk, the video speculates that this is seldom done.

¹ There are some stations where the only trains are scheduled to meet the minimum legal requirements of servicing the station once a day, the so called Parliamentary trains.

During the Cold War, the Friedrichstraße U-Bahn station was physically located underneath East Berlin but was part of West Berlin's network. There were several such "ghost stations" in Cold War Berlin, and trains usually ran straight through them without stopping. Friedrichstraße, however, was unique because it was used to transfer between two lines, so trains actually stopped at it. West Berliners could ride into the station, make a transfer, and then ride out, but in order to actually leave the station they would have to go through border control on the surface, a rare event. Similarly, East Berliners could not enter the station without going through border control.

Depending on how you draw the line between a station and a platform, the Pittsburgh/Bay Point transfer platform that's part of the Bay Area Rapid Transit (BART) system in the San Francisco area arguably qualifies. It's a transfer point between two rail technologies that has no non-emergency entrance/exit except by rail.

The main BART system is an electric broad gauge light rail system. Due to the high cost of construction for such a non-standard design, the planners of a 10 mile extension of the system to Antioch, California decided it would be cheaper to build a separate rail project called eBART using standard gauge rail and off-the-shelf diesel multiple unit trains.

Umi-Shibaura Station in Yokohama, Japan might be considered as a station you can't leave, depending on how you define it.

The land around the station is owned by Toshiba, so only Toshiba employees and guests may exit the station. To the average person, this is a station where you cannot leave. There is, however, a small park maintained by Toshiba within the station premises for people to visit.

Since it's a terminal station, make sure to pay for the ride back!

Sagliains is a railway station in Switzerland where the Bever - Scuol line joins the Vereina line. It has a single island platform with no outside access. Its purpose is to allow interchange between trains on both lines. For that purpose st. Moritz - Scuol trains are timed to meet there with Scuol - Landquart trains (and vv.) https://en.wikipedia.org/wiki/Sagliains_railway_station

Smallbrook Junction on the Isle of Wight is the only open example I can think of in the UK currently* served by trains on the national network (ie ignoring heritage railways). Lympstone Commando (formerly accessible to folks with business with the military base) now has a footpath I believe, and Redcar British Steel (accessible only to employees of the steelworks) no longer has any booked calls.

*Actually not currently currently, but only temporarily...

Edit: As of 2021 (imagery date) there appears to be a connection between local roads and the railway.

On the Qinghai-Tibet Railway, the Tanggula station (which has a platform and signage) is described as follows:

As of 2010, no passenger transport service was available since the region is uninhabited. A through train may stop at the station to wait for another train coming from the opposite direction to pass, but passengers are required to remain on the train.

It's claimed to be the highest rail station in the world, with its location "specially chosen for the view from the platform." 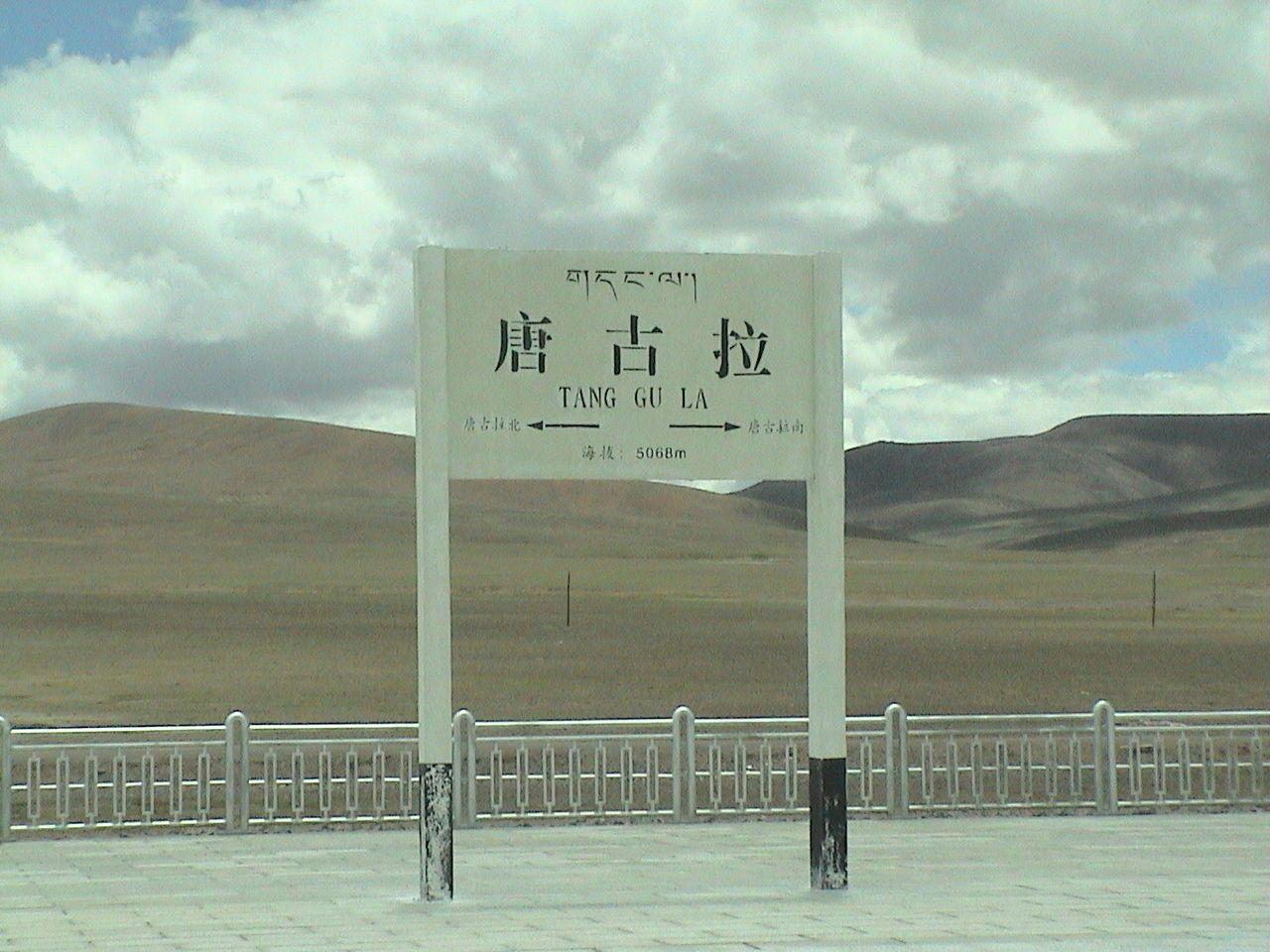 Although it's not exactly a train station, Cornbrook tram stop did not allow passenger entry or exit from the platforms when it opened in 1999. It was only used to change between two lines on the Manchester Metrolink. The surrounding area consisted of derelict buildings and junkyards squeezed between the Ship Canal and a major road, so anyone leaving the station would probably have been lost (and a prime target for muggers). After new housing developments were built nearby, the emergency exits were made accessible to the public from 3 September 2005.

If so, Manhattan Transfer in Harrison, New Jersey would have fit the bill.

In 1910, the Pennsylvania Railroad, whose trains originally ran to a waterfront terminal in Jersey City, opened a new branch running under the Hudson River to a new station in Manhattan itself; the tunnels under the Hudson and to the underground tracks of the new station were electrified to avoid suffocating train occupants, but most of the PRR's trains (passenger and freight alike) were pulled by steam locomotives that couldn't use the new line. The railroad's solution was to build a station on the main line just to the west of the junction, so that passengers on steam trains could transfer to electrics for the run into New York. A few other railroads also started serving the station, but, for its entire existence, it existed solely as a place to change trains, with no access to the station except by train.

Following the electrification of the rest of the PRR's main line in 1932-33 and the extension to another station further west of the trackage of a railroad that had formerly connected to the PRR at Manhattan Transfer, the station became redundant, and was closed in June 1937.

Not the answer you're looking for? Browse other questions tagged trains factoids train-stations or ask your own question.

14
How can I find out which platform my train leaves from in Brussels Midi?
4
Can you access the Roma Street Parklands from Roma Street Station, without a train ticket?
29
Is the Koboro rail station really inaccessible by land?
8
Does the high-speed train from Chongqing to Chengdu depart from Chongqing or Chongqing North station?
11
How do I figure out which platform a SEPTA regional rail arrives at for a particular station?
8
How much transfer time do I need at Karlsruhe Hauptbahnhof?
8
Most remote passenger train station
12
Which railway stations in the UK only offer travel in one direction?
3
Transiting Ukrainian border rail station without papers for Ukraine
5
How can I find my train platform number at Zurich?