chinadiscovery.com (mirror) specifies the boarding process for high-speed trains in China as follows: 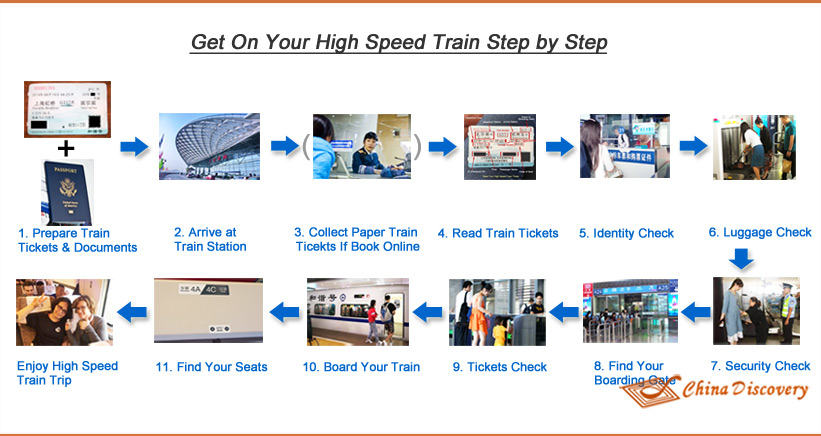 Since 2012, all passenger trains in China have adopted the "real-name system" where all tickets must be purchased with an associated name (and ID number) and can only be used for the named passenger.

Initially this is was only checked at boarding but to reduce heavy traffic inside the train station, as well as for security measures, nowadays most stations can only be accessed with a ticket and the ID associated to it.

This is strictly enforced almost everywhere (as it also involves the commercial interests of the railway company).

What may be different for HSR (and certain other routes): Many larger stations for more popular routes allow the use of Chinese machine-readable IDs without physical ticket (much like e-Ticket for flights); automated screening (via facial recognition) may be available. But this is not universal for all HSRs at the moment.

There are also stations with dedicated area for HSRs with dedicated lanes that allow faster boarding, which can also be a pain if you are unfamiliar and you may need to exit and enter through another side of the building to transfer trains for example.

This is standard as part of entry process to the station building. I couldn't remember when it started, but it was a thing since 2008 at latest.

After the terrorist attacks at Kunming and Ürümqi train stations in 2014, the security at stations becomes remarkably stricter and many stations underwent renovations to seal off the station building as a "sterile" area. Additionally, the pat-down/metal detector checks are introduced generally. This is also when much more oppressive policies were introduced in Xinjiang.

But this check can still be quite lax at many stations, as long as you don't have obviously banned items (e.g. knives). But it does increase the wait queue at peak times, during which many people are just waved through at some stations.

During sensitive periods (e.g. Congress/CPPCC sessions, Olympics), certain trains, HSR or otherwise, will also be subject depending on the destination (e.g. Beijing, Xinjiang).

What may be different for HSR (and certain other routes): Train stations serving HSRs may have more stringent security practices, even though the safety rules are technically the same. But HSR-serving stations are usually large and considered an important location, and sometimes are inspected by higher up officials, so there is a greater desire to at least appear more secure.

Not the answer you're looking for? Browse other questions tagged trains china or ask your own question.

24
Does it take one hour to board a bullet train in China, and if so, why?

12
What is the closest city I can go from a bullet train departing from Beijing?
11
Should I book my train connections in advance in China?
6
Is the train between Shanghai and Hangzhou smoke-free?
3
Do I have to register at the police station if the hotel doesn't do it for me after entering China with a Shenzhen Special Economic Zone Tourism Visa?
14
Is the bullet train in China typically cheaper than taking a domestic flight?
24
Does it take one hour to board a bullet train in China, and if so, why?
5
Why does the T109 night train from Beijing to Shanghai have such a long stop at Xuzhou?
8
Is the Wi-Fi in high-speed trains in China reliable and fast enough for audio or video conferences?
5
Is there any downside in purchasing high-speed train tickets in China via the official website, instead of third-party agencies?
5
Can one purchase train passes in China, or is one supposed to buy tickets one by one?