What is the highest road in the world that is accessible by conventional vehicles?

I'm looking to drive up the highest road in the world but I don't have access to any special vehicles. Where can I do so? The exact conditions are:

I've found this list on DangerousRoads.org, but it includes many enthusiast-only roads.

Semo La in Tibet at 5,565 is the highest surfaced road, used actively by travellers.

Semo La (Chinese: 桑木拉大坂; Standard Tibetan: བཟར་མོ་ལ) is a mountain pass situated in Coqên County, Ngari Prefecture in the central part of Tibet and gives access to the Changtang region. It is found on the so-called Northern Route, north of Raka and south of Town of Coqên in Central Tibet. Travellers use this route as an alternative access route to western Tibet and Mount Kailash, especially when mud makes access by the more southern route difficult.

The road crossing the pass was once an old unsurfaced track travelled only by a weekly bus and trucks heading west to avoid the boggy parts of the south of the country. The construction of paved road through the pass, Tibet Provincial Road S206, was finished in late 2015.

Lonely Planet have an itinerary for the Northern Ngari:

You'll need to do this as part of a pre-arranged tour, so if you're looking for a self-driven independent drive, you'll need to look outside of Tibet.

See also the Wiki for Extreme points on earth for other interesting places to visit!

The Tanggula Pass of China National Highway 109 (G109), the main road between Tibet and the rest of the China, reaches an elevation of 5,231 meters at its highest point.

The highway is fully paved and maintained, so it's passable in a regular 2WD vehicle, although winter conditions can be extreme. It's also the only road entry point normally open to foreigners coming to Tibet, although general Tibet restrictions do apply, which means you will need to have a licensed guide accompany you (you can still drive by yourself).

Not the highest, but perhaps much more doable than the above: Pikes Peak Highway near Colorado Springs.

Currently the highest answer on this page, 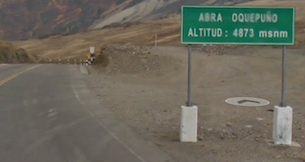 Some while ago, I did a bit of internet research on Macusani, a town in Peru. It sits at an elevation of 4,315 m (14,157 ft). It is on the Carretera Interoceanica, a relatively new road constructed between Brazil and Peru which was completed in 2011. Its highest point is at Oquepuño Pass, about 20km southeast of Macusani. It is described on the DangerousRoads site as follows:

Abra Oquepuño is a high mountain pass at an elevation of 4.873m (15,977ft) above the sea level, located in the province Carabaya in the region Puno, in southern Peru. It’s said to be the second highest asphalted road in South America. The pass is traversed by the Carretera Interoceanica, also known as Ruta nacional PE-34B. It’s an asphalted road.

I have done a virtual drive on highway 34B around Macusani and the road seems to be in excellent condition suitable for ordinary 2WD vehicles. I have never driven at that kind of elevation so I do not know how well a normal rental car might perform with the little oxygen available. Weather in general and sudden weather changes in particular are likely a significant hazard; I don't know the best time to travel the Carretera Interoceanica.

There is a timelapse video of someone driving on highway 34B from Azangaro to Macusani, dated 2015/05/06. They covered the distance of roughly 140km in a bit under two hours. At 23:45 into the video, they reach Abra Oquepuño. Road and weather conditions look excellent throughout the entire drive.

The world's highest motorable road passes through Umling La pass in Ladakh Union Territory of India. It is located at an altitude of over 19,300 feet and connects the Chisumle in the Koyul Lungpa valley and Demchok villages of Leh district of Ladakh.

Road to Khardung La pass (5359m AMSL) is the 2nd highest road in the world. The pass is a crossover between Leh, Nubra and Shyok valley. The Indian military vehicles drive through this pass to send supplies to Siachen post (the highest battlefield in the world). Any kind of vehicle can be driven on Leh-Khardung-La pass road.

Chacaltaya is a ski slope in Bolivia. The road to the base station might not be paved. The weather observatory is at about 17,000 feet (5200 meters). Outside of the Himalayas, this has to be one of the highest.

Not the answer you're looking for? Browse other questions tagged where-on-earth road-trips factoids overland or ask your own question.

5
What is the highest pass in the world that is kept open (plowed) in winter?
5
What are the practical consequences of driving a rental car on unpaved roads?