What does "Drive Friendly -- The Texas Way" mean? 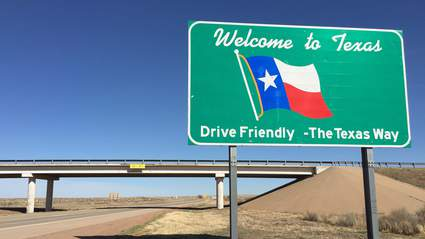 Saw this sign as I entered Texas earlier this week, as well as digital display boards reminding drivers to also "Drive Friendly - The Texas Way". 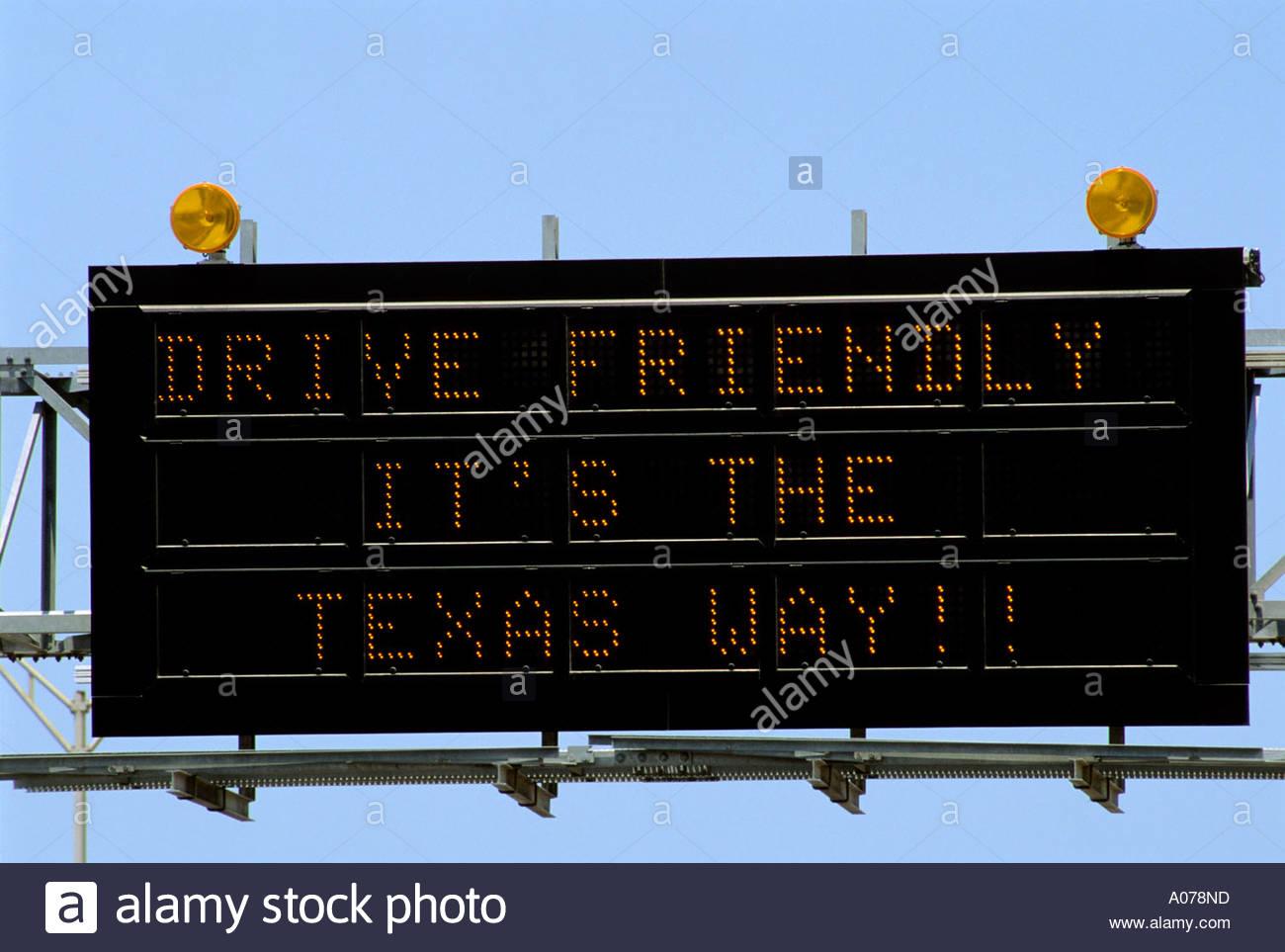 What exactly is the Texas Way? Do Texans have some sort of special customary way of driving? I tried briefly looking up the term through Google and it seems even Texans are conflicted about what the intent of the saying is -- some say it's related to pulling over to the slow lane if a faster car wants to pass you, which is something I'd attribute less to being Texan specifically and a more universal United States thing (or perhaps Californian thing, which I'm commonly used to already just as a good way of showing courtesy). Some say there it's about Texans honking their horns at out-of-state plates but that seems like such an odd thing to push Texans to do.

Hopefully someone can clear up what this means -- especially to someone like me who's from out-of-state. I'll be passing through Dallas/Ft. Worth soon so it'd be nice to get a headsup if there is some meaning behind this.

I don't really have a source for this, but don't overthink it. "Friendship" is the official state motto. Which doesn't really mean anything—state mottos aren't some guiding ethos everyone in the state has to live by—but they tend to get trotted out for signage and campaigns.

They're signs asking that you drive in a friendly fashion—watch for pedestrians and cyclists, be careful of your speed, use caution in construction zones, and so on. I'd imagine that this also includes things like avoiding aggressive driving and helping to let others change lanes or merge on/off the freeway.

As with all promotional slogans or etiquette campaigns, I wouldn't read too much into it, and Texans (I am not one) surely have opinions about their fellow drivers that may be less than friendly. The Texas Department of Transportation is just appealing to drivers to be more friendly (better) drivers.

What may be happening is this. Let me know if this isn't it. You may possibly be thinking the sign means:

Drive friendly. Do so by driving specifically the Texas way, not another state's way.

However, what it means is this:

As far as the driving rules go, Texas is usually pretty normal. Their driving rules are about the same you see in any other state. There might be a few states with really weird rules that matter for normal, everyday driving, but Texas isn't one of them.

If you drove from California through Arizona and New Mexico to Texas, then just drive the same way you do in Arizona and New Mexico. For normal, everyday, passenger car driving, the rules are basically the same between AZ, NM, and TX. (I think CA is similar as well, but I'm not completely sure. I've lived in AZ and TX though, and they are very similar.)

By the way, for English in general, the grammar and such they use in those signs can have either of those two meanings mentioned above, but the cultural context says it's the second one in this case. I'm guessing it's the same in the UK, Canada, and Australia, but there may be one or more English-speaking countries where the culture is different in this matter.

Something this reminded me of just now: This isn't really a cultural context issue, but a word definition issue. In New Zealand, you might see this type of road sign: 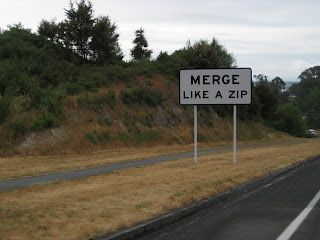 Many Americans won't understand what that sign means. In our form of English, "zip" is basically just a verb, and a lot of times, schools don't teach this specific dialectual difference. Some Americans may figure it out immediately, but many of us would probably at least have to think about it for several seconds (particularly if we can't see the road very much further ahead, because of hills and stuff blocking our view).

However, if we translate that into AmE, it basically becomes: 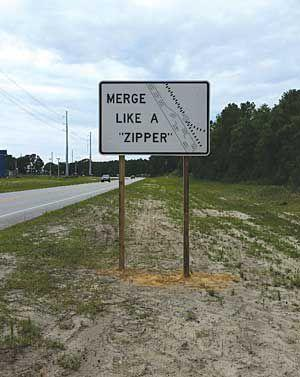 For New Zealand, "zip" is easily both a noun and a verb, but for the US, it's mainly a verb. The sign is talking about two roads merging into one, and it's saying to have cars from both roads take turns, one car at a time.

Not the answer you're looking for? Browse other questions tagged driving texas or ask your own question.

6
What limitations are there on my 4 month old UK driving licence for use travelling across Australia?
22
Legality of Driving a Motorcyle in Vietnam as a Foreigner
5
What is the best month (weather and budget wise) to visit Houston area, Texas?
66
Texas, USA speed ticket as a European citizen, already left the country
2
"Give way" on prohibition sign, what does it mean?
4
What does red painted bus stop mean in UK?
28
What does this Suriname traffic sign mean?
10
What does amber - green traffic light mean in South Korea?
33
What does the Free Recovery sign (UK) actually mean?