May a cyclist or a pedestrian cross from Switzerland to France near the Basel EuroAirport without going into the airport?

I was cycling today in Switzerland, and I found myself on the path along Route Douaniére heading toward the Basel EuroAirport. I figured I'd cycle up to the airport, find a way to cross into France, and then head straight back across to my home in Germany.

The map below shows where I rode. I found that as I approached the airport, options seemed more and more limited, and a barbed-wire-topped fence lined the road on both sides. At the airport itself, I rode up the deliveries-only road and one or two other places, but all I found anywhere was fencing and various aviation-oriented manufacturing firms.

I'm not surprised it's not possible to cross between Switzerland and France in a car around the EuroAirport (though I'm also not sure why it's like this). But I was surprised I couldn't find a place to cycle or walk across. There are a fair number of border crossings around here that are open to pedestrians and cyclists but not autos. But apparently not at the EuroAirport.

Did I miss it, or is there really no way to get to France even by foot or by bike once one starts up the Route Douaniére to the EuroAirport from Basel? 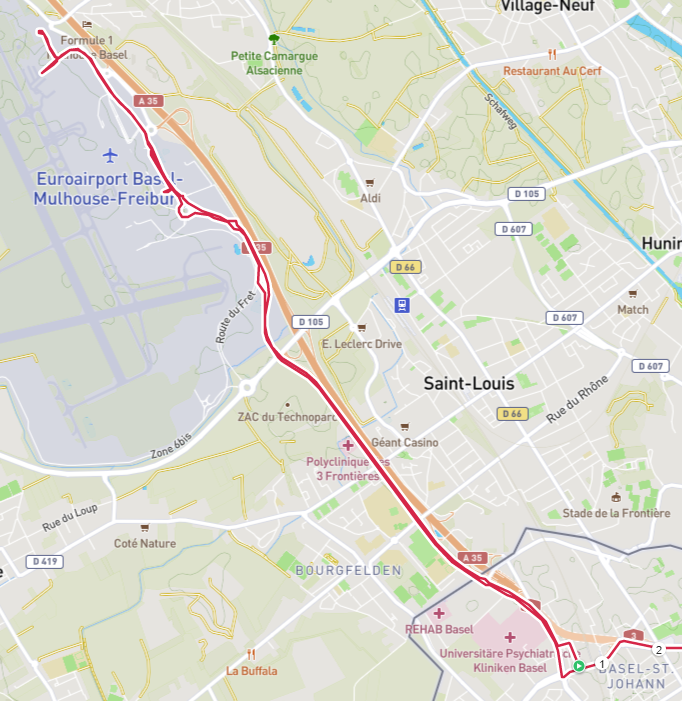 Route douanière is technically on the French territory, but you are in Switzerland with respect to immigration (which is less of a problem after Swiss accession to Schengen) and customs (which is very important, particularly for the companies dealing with physical goods in Swiss sector of the airport). This is why there are fences and barriers surrounding the road.

The road is first and foremost the treaty-required customs-free Swiss service road for the Swiss sector of the airport. The idea is you should only use the road for the airport (or airport-related businesses operating in Swiss customs territory) and that's why France agreed to "cede" the territory.

Technically they could probably open crossings along it (I didn't read the bilateral agreement in detail), but there are few incentives.

From Google streetview it doesn't appear to be any obvious places where you can cross. Other than customs reasons, airports and many airport-related businesses also have other requirements for aviation security reasons, so a crossing point is probably unlikely.

For the legal provisions:

As far as I could find, no agreement on its use for general traffic was made so it remains a dedicated service road. It doesn't in principle prohibit pedestrian crossings for the fences though, now Switzerland is in Schengen.

I don't live in Basel anymore, so I cannot completely vouch for this. But there used to be a small pedestrian/bicycle path branching off to the left from Flughafenstrasse (coming from the Basel side; 47°34'29.2"N 7°33'44.0"E), right at the border. Following this path for about 100 meters you can then turn right and you're in France. As far as I know there was nothing sketchy about this path, but this was at least six years ago so things might have changed, or perhaps my memory fails me. 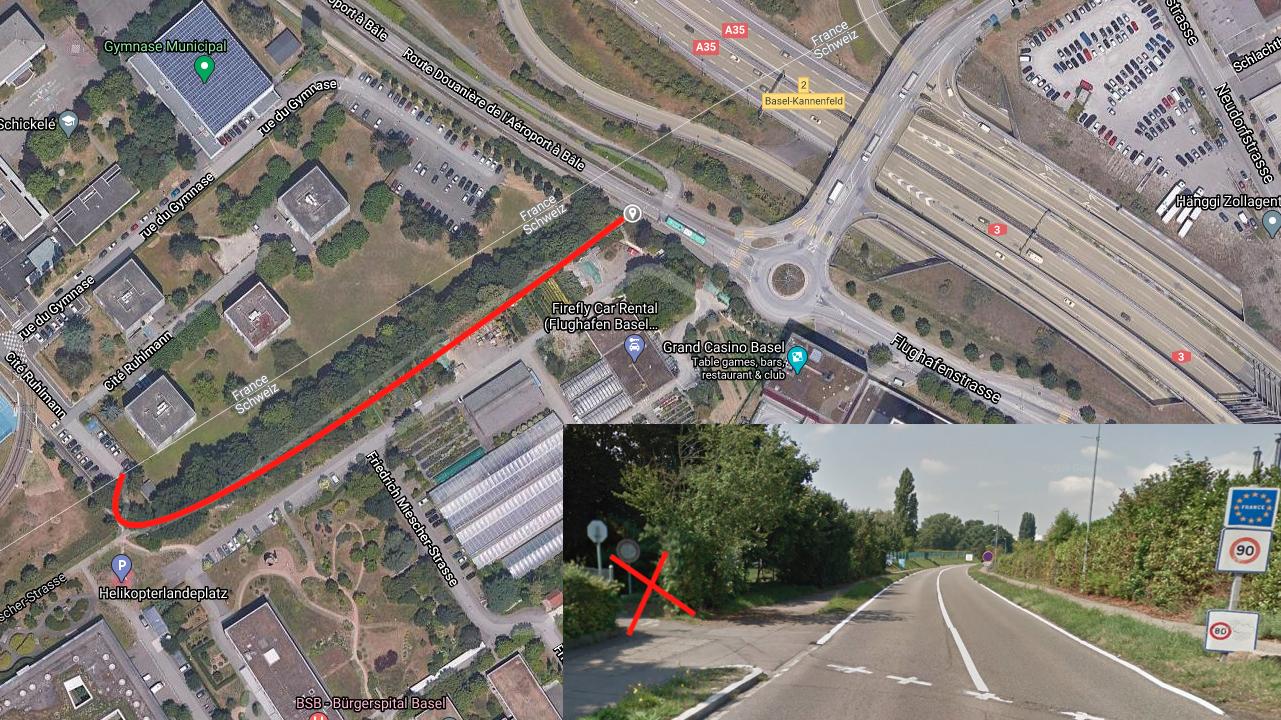 How close must you be to the airport? I haven’t been there, but on aerial photos, there appear to be several unblocked places to cross on the southwest side of the airport. My images were too large to upload, but there was (1) a sidewalk disappearing under trees at the border, with Rue St.-Exupéry ending at the same place; (2) further southwest, Im Burgfelderhof crosses the border and joins Rue de Romains which follows the border; (3) nearby, it looks like you can go through or around the Burgfelderhof tram stop to cross Rue de Romains and get on N266.

It seems to be possible to cross over to the French side via the S3/F6 parking lot (as identified by @jcaron). As per Google Maps there are "no entry" signs on the road there, but presumably its okay for bicycles to cross over. Here's how it looks like on Google Maps: 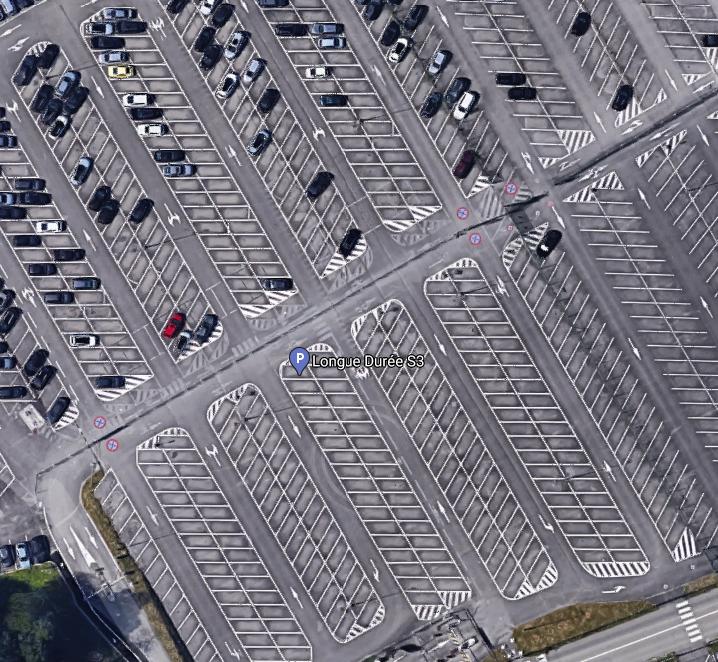 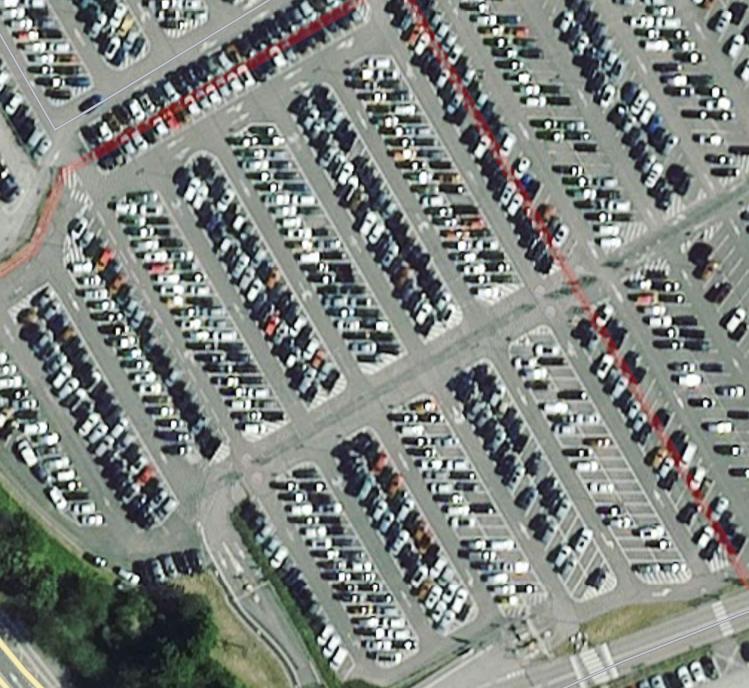 So just turn right before you enter the airport, cross over via the parking lot and after that you're on the French side. Alternatively, take the side road headed towards the gas station (Autopole) and cross over there.

Not the answer you're looking for? Browse other questions tagged france borders switzerland basel or ask your own question.

13
How happily will taxis cross the triple-point borders around Basel?

18
What kind of Visa do I need to land on the EuroAirport Basel-Mulhouse-Freiburg?
6
Why do UK train tickets crossing London include the underground, but Paris ones don't for the metro?
13
How happily will taxis cross the triple-point borders around Basel?
8
Is it possible for non-Russian, non-Mongolian citizens to cross the border into Mongolia near Mondy, Russia?
8
Crossing the border from Switzerland to France and back
8
Can I cross the border from China into Vietnam on a motorcycle?
2
Can someone unvaccinated travel from the UK to France via Switzerland?
1
Can I bring Philippine mangoes into France via checked-in luggage?