Are there issues with street photography in China when using a professional camera?

Will I face to legal troubles when taking documentary photos of people in the streets in China?

Maybe a photographer has to take photos without getting a permission of people to get better documentary results. Is it advised to ask people before taking a photo in order to avoid negative unpredictable consequences?

Very few problems are likely when taking 'street photos' in China in most cases in most areas with even half sensible behaviour. People in China tend to be more likely to be happy with strangers taking their photo than do people in the West - presumably white face + large camera = tourist provides ample reason :-).

Parents and people minding children are generally substantially happier about having their children's photos taken than are people in my country. (I've had the occasional problem here and about none in China). In all cases due care and general openness is advised but I've essentially had no problems with this.

Some people in China are shy - not unexpectedly, and some older people want no part of it, but in most cases people are open to being photographed or even eager or amused.

Treat authority figures with due care, except, perhaps, in Tian An Men Square.

The "documentary" aspect of your question has essentially no impact on the taking of the photos. Depending on possible political aspects the authorities may or may not care, but the subject of your photography are not liable to concern themselves with your overall motivations. I'll comment briefly on political and authority related matters first and then on what you actually asked about :-).

As uncovery said, there are areas where on occasion the authorities frown on photos of certain sorts or of photos at all, but usually you can expect to be ignored or treated benignly by the authorities. Xinjian province has a somewhat similar background to Tibet but is far less known of in the West. I have wandered the streets of Urumqi, Xinjian's largest city, with no attention at all from authorities. During the subsequent 'unrest' all communications with the outside world was very tightly controlled and photography would have been much more risky. Things have since returned to 'normal' and sensible behaviour probably carries no risks. Tibet is always more sensitive - if you want an undisturbed trip then no photos should ever show activities which involve any hint of protest or unrest.

A beautiful lake runs North-South in the centre of Beijing. A road crosses the centre. Unbeknown to me the southern half is ringed by restricted military land. I found this out by taking photos from the middle bridge :-). There was a guard post at the end of the bridge which I had not seen ... . On that occasion I was simply given a stern warning and sent on my way. Taking photos of policemen (& women) in general is probably unwise. In Tiananmen square you seem to be be able to do so with impunity (for some reason :-) ) but you get some nasty looks. Larger version here 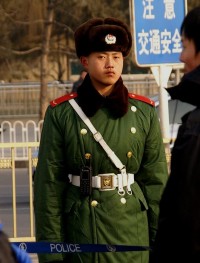 I have visited China about 15 times in the past 5 years, travelled widely, and taken literally tens of thousands of photos there in about every conceivable situation. I mainly use an SLR and these have increased in physical size over time. My cameras do not quite match the excessively annoying size of a full frame EOS1xxMkyy or D3 or ..., but my recent Sony A77 and prior A700 DSLRs with various lenses probably look as professional and imposing as any other DSLR to most subjects.

In the overwhelming majority of cases there are no problems at all taking "street photos" with even half sensible behaviour by the photographer. In most situations the Chinese are more accommodating and accepting of photography than in many western countries. They are generally happy for you to take photos of children and usually pleased that you are interested.

In many cases I take candid photos and then may follow them up with requests to take further photos. In such cases I show people what I have taken already and in borderline cases this usually forms a bridge into having people allow me to take further photos. In some cases where a stall holder or person on the street seems more shy rather than annoyed I find that showing them photos taken of other people and scenes in the same area often results in being given permission. Where it seems useful I ask people for email addresses so that I can send them copies of their photos. Most younger Chinese people have "QQ" email addresses and older ones may have or have a relative or friend with one. The QQ system has addresses of the form QQnnnnn... where nnnn is numeric. (There are other email systems too but QQ seems fairly universal).

My answer to this Stack Excahnge Photography question, How should I approach people to take their portrait? applies as much to my Chinas photography as elsewhere and may be worth a look.

Here are a few "people" photos from China. Some taken with permission (very obviously), some as candids. eg the photos of someone buying food in uptown Shanghai (top left) could not have possibly been taken if I'd introduced myself first. And most people would not understand afterwards why the old-white-guy would want such a photo if I showed them afterwards. The workmen posing (bottom middle) was preceded by a number of candid shots of them making mud-cement-straw mix for roof waterproofing. The auburn haired, blue eyed, pale skinned young woman was in Beijing. I suspect she had tried quite hard to achieve that look. The Turkic looking people with the large urn are Turkic people :-) - Chinese by nationality but non-Han ethnicity- Uighurs in Urumqi in Xinjian.

Larger version of this mix here - 6000 x 4000 5 MB
These are from a Random Strangers album. Many but not all from China. 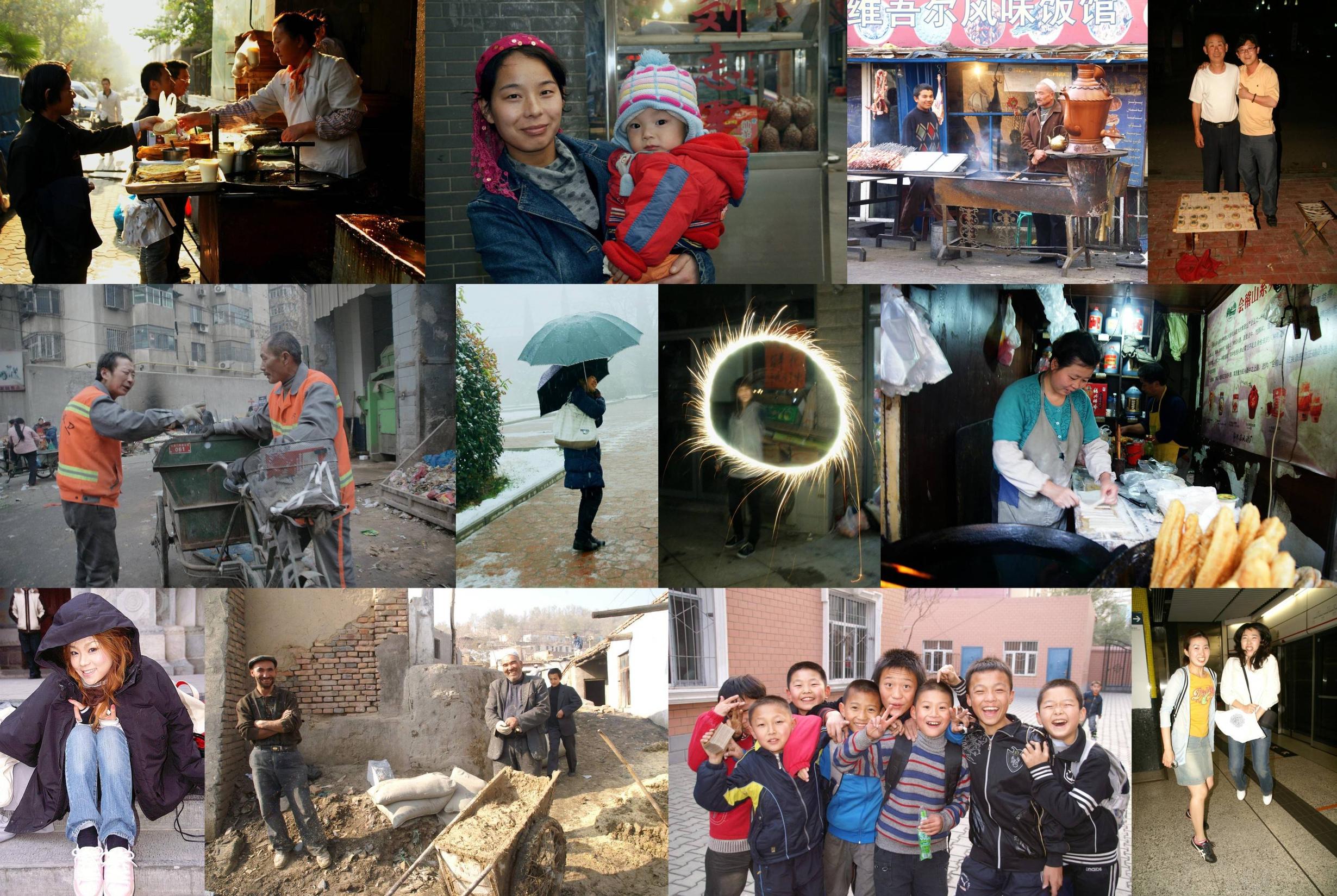 There is no single answer for China. As with everything else, you have to know where you are and how to behave. Examples:

Be in a wet market and take a picture of a market vendor and the food. The vendor will most of the cases be proud and surprised that you take a photo. You make them very happy. Some others will be frustrated and ask you to buy their goods instead of taking images.

Be in Kashgar, Xinjiang province on the anniversary of the Uighur riots. IF you look like Journalist and/or take pictures of Chinese security forces, you will end up in jail and risk being deported.

So when it comes to the normal people in the street, there is no higher risk than in most places in western Europe. If the wrong person in the wrong moment sees you taking a picture of them, they might be angry, but the chances are very low. However China has it's issues with foreign Journalists and acting as one without having a Journalist visa and even interviewing people will get you in trouble.

I have taken images like the following and many thousands more in China and never got into any trouble. 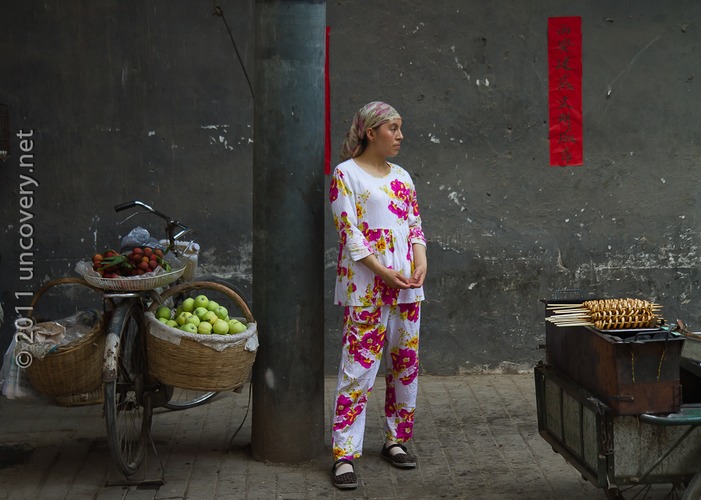 However if someone saw me trying to take a picture and frowned, I took down the camera and excused. Basic common sense has to apply always.

Not the answer you're looking for? Browse other questions tagged china photography or ask your own question.

11
Are there prepaid mobile data plans in China?
6
Are there companies in China that offer personal tour guide services?
4
Are there any ferries between Okinawa and China?
8
What documentation is needed to register in China with local police when staying with a friend?
11
What is the deepest nesting of autonomous areas within other autonomous areas in China? Are there areas that are three deep? Deeper?
4
Must a non-resident foreigner always carry their passport with them when in China?
2
Do I have to do the "accommodation registration at local police station" within 24 hours of entry when using Airbnb in China?
5
Are there additional restrictions on domestic flights within China due to COVID-19 in November 2020?