With the 19 December 2020 COVID 19 measures, can I travel between the UK and the Netherlands?

My UK boyfriend and I, in the Netherlands, do not plan to see each other over Christmas, but we like to know what is possible in case of emergencies to either of us or our close families.

So we like to know what travel options are still open and what measures do we need to take after traveling that way.

While my question is specific for UK to the Netherlands and the Netherlands to the UK, the answer(s) will cover UK to several other Schengen countries or vice versa as well. And warn people from other countries what to look out for.

Added:
We prefer to keep to the spirit as well as the letter of the laws and rules. So flying via the other side of the world is not our way.

10 April 2021 update: The COVID 19 situation in the UK has pretty well quieted down. The problem is now in the Netherlands, and basically in much of continental Europe. There are restrictions, requirements to have test results to come into the Netherlands but the situation is such that the UK people are told not to travel yet.
So while we could travel in an emergency, testing and self isolation/quarantine if needed, it is still not open for normal travel.

4 January 2021 update:
While travel options are mostly back to the same level as early December 2020, Brexit has brought on a change. Now UK citizens do need a good reason to travel to the Netherlands, tourism in not acceptable.

27 December update:
Travel between the UK and the Netherlands is slowly getting back to the situation as written in my original answer. Only the travel restrictions within the UK are stronger than they were at the time.

Old answer.
The Netherlands have called a ban on flying from the UK to the Netherlands except for a very small group of people, flying for family emergencies in a casual partners family is not included. Many flights have been cancelled and the rest are likely to be cancelled if the number of passengers is too small.
The situation with several other Schengen countries is the same, like Belgium and Italy.

Ferries between the UK and the Netherlands are still running, mostly for freight but they do transport 'normal' passengers as well. The ferry companies mention that they have not yet been asked to stop carrying passengers outside the small allowed groups, as freight crews and medical staff. But they sounded like they will not be surprised if they will be asked to stop soon.
The ferries from the UK to the Netherlands do not leave from a Tier 4 area (at the moment) but the Harwich to Hook of Holland ferry route is getting close or going through that area, so be extra careful if you need to use the ferry.

The direct Eurostar trains have been stopped as have the trains to Brussels as Belgium has called for a total ban on travel from the UK to Belgium.

Travel between the countries on the continental coast near the UK, so France, Belgium and the Netherlands, is very restricted but not outright stopped. If you feel the need to make use of a French ferry, if they do run, consider that traveling through Belgium into the Netherlands is very much discouraged if not outright stopped and calls for it to stop are getting stronger. The ferry ports in England serving the Channel coast are most (or even all) in the Tier 4 area, so should not be used, outside the travel restrictions on the continent.

If you do manage to travel from the UK to the Netherlands, you are required to self isolate for at least 10 days and there is talk about requiring a recent COVID 19 test before being allowed to cross the border. The Netherlands is in a kind of lockdown, where people are still allowed to go to work if they can not work from home but all shops but the essential ones are closed.

Traveling the other way round seems slightly less restricted at the moment, although the Dutch government has put all countries on the 'orange' list, that is the level that you are very strongly advised only allowed to travel if you have a strong reason to do so, visiting friends and even partners is not included on that 'reasons' list.
On arrival in the UK, you are still required to self-isolate for 14 days, although there might be an escape from that with testing. And on arrival in the UK, you will have to respect the local rules, which is effectively a lockdown in the London and South-East area and many restrictions elsewhere.
See the BBC source in English about the travel restrictions within the UK.

In short, forget it unless it is a real emergency and you have weeks or months to stay where you go, as you will have to self isolate traveling both directions and it is likely you get stuck abroad and can not get back.

For historic reasons, the updates moved from the top of the answer to here: 23 December update: Travel possible but a recent negative COVID 19 test needed.

(The next edit was true for a few days, 21st and 22nd of December 2020)
Cross Channel and North Sea travel is closed.
Completely closed for people from the UK, freight without a driver is still allowed on those few ferries still running and some ferries to England still transport passenger, although the advise is not to travel unless essential and to expect getting stuck in the UK.

NB: the situation is changing so rapidly that this answer will go out of date in a matter of weeks, if not days.

For UK residents, there are two aspects to this: domestic restrictions and foreign travel bans. The British government currently restricts foreign travel for those who live in Tier 4 areas. Here's a handy map of where the Tiers are currently: 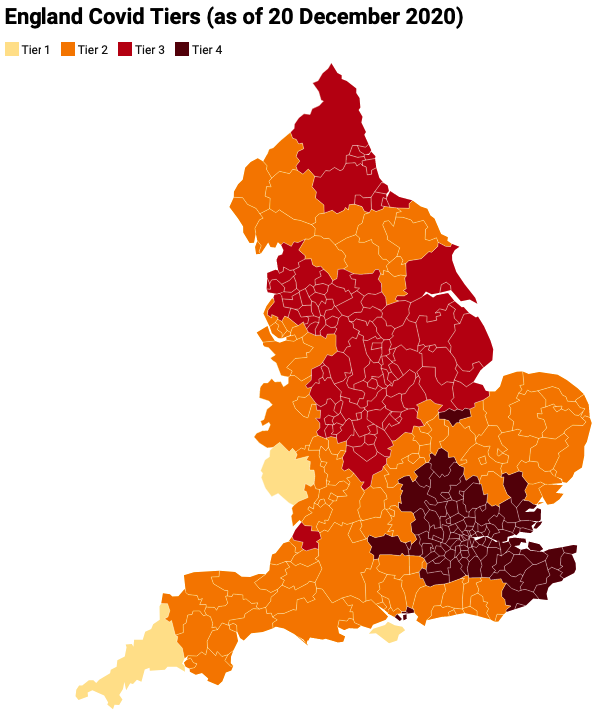 If you're in Tier 4, you're not allowed to leave home except for a few specific reasons.

As far as international travel is concerned, only travel for work, for medical treatment or for caring responsibilities likely applies, so casual tourism is out of the question for Tier 4. However if you live in Tiers 1, 2 or 3, international travel is unrestricted and you are even allowed to travel to an airport located in Tier 4 in order to board a plane:

If you live outside a Tier 4 area you may still transit into or through a Tier 4 area to travel abroad if you need to, but you should carefully consider whether you need to do so. In addition, you should follow the public health advice in the country you’re visiting.

Now let's go over international rules. According to IATA's special COVID page, the following rules are in effect for the Netherlands:

Passengers are not allowed to enter.

So you could fly to the Netherlands tomorrow if you first make a stop in a different country, on two separate legs. For example, you could do it via Turkey which has no restrictions whatsoever on British nationals. First, book a flight to Istanbul: 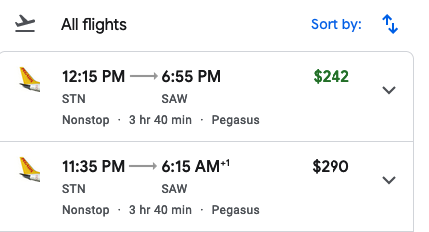 Then, book a separate flight from Istanbul to Amsterdam. You will be subject to a 10 day quarantine on arrival. 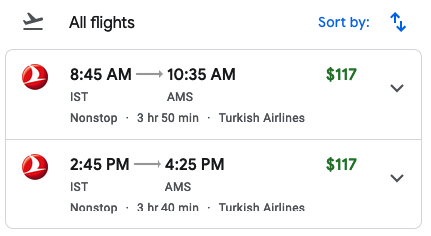 In the other direction (Netherlands -> UK) there aren't any particular restrictions, although you do need to self-isolate for 10 days or up until you take a COVID test. As always, be mindful of being a potential carrier and ideally get a COVID test before you leave.

TL;DR: its legally possible, unless you live in a Tier 4 area (mostly around London, Kent (Dover and Folkestone channel ports) as of today).

Hull (ferry to Rotterdam) is in a tier 3 area.

Harwich (ferry to Hook/Hoek of/van Holland) is in Tier 2
(ferry train starts at Liverpool station, London in a tier 4 area).

Not the answer you're looking for? Browse other questions tagged uk public-transport covid-19 netherlands ferries or ask your own question.

3
Can you renew a UK railcard early (and carry over the extra days)
8
Visiting Stonehenge on the way from London to Bristol
10
How do EU citizens claim healthcare bills in the Netherlands with the EHIC?
10
Can I drive a Dutch friend's car in the Netherlands?
6
Belgian Rail Pass and RailPlus pass. Which to use to travel from a Belgian station to Roosendal, Aachen or Maastricht?
5
What is the earliest point a passenger arriving from outside of the EU and from the UK can meet up at Schiphol (Amsterdam) airport?
8
Are import duties the same when travelling by plane or sending by mail?
1
Travel to Japan in December 2020
1
Can a proctored online COVID antigen test be used to travel to the Netherlands?