Red Light Ticket in Australia sent to my UK address

I was driving my boyfriends car at the time.. didn't even realise I'd gone through a red light until later on, when a few months had passed and I'd gone back to the UK, my boyfriend gets a letter through the post saying his car was caught going through a red light. He knew it was me and said to them it was me (he told me there was nothing they can do as I'm in another country).. didn't think too much of it, but I've just got the letter through.. $446 dollars! Oh my goodness.. I genuinely don't have that sort of money. I've never got a ticket for anything, I'm a very safe driver, never speed etc, it was a genuine accident, always take caution (this is for those really unhelpful people who like to say 'you did it, so pay it blah blah')

So I was just wondering where I stand.. my first question is if I do end up paying, will I get the points on my licence? NOT IDEAL if that's the case. And my second question is if I just ignore it can they track it back to me any further...what they can do seeing as I'm in a different country. They can't actually prove it was me in the car, I could say my boyfriend is lying? (I'm not gonna but just saying do they have a leg to stand on)

It wasn't a rental car, so I didn't give any details like bank card, passport etc. So unless they can link my information back to my passport.. I'm not sure.

My worry is if I go back to Aus one day, is it gonna get flagged up? Don't want to go to jail lol!

Really appreciate any advice or help, thank you!

Since you said you were driving your boyfriend's car in Australia, I'm going to assume your boyfriend is Australian. If not, that would change things. I'm also unfamiliar with the exact processes of Australia, but I am with other countries' processes for foreign traffic tickets, and they tend to be similar.

If you never go back to Australia they are very unlikely to pursue you for the money. Even if you go back occasionally as a visitor they probably won't. However if you ever immigrate to Australia, perhaps to be with your boyfriend, it might become an issue.

If you don't pay, they will probably go after your boyfriend for the money. In most places it is the car owner who is legally responsible for paying fines. This is to prevent cases like what you are thinking about, where the owner just says "it wasn't me driving" every time they are given a ticket. (I'm not sure about the exact laws in the Australian state you were driving in.) They may have followed up with you if your boyfriend told them you were driving, but if you say you weren't then they will go back to him. This might also get you to the point where at least one of you has lied on a legal document, which if you are ever both living in Australia will be a problem. If you just ignore the letter they will still probably go after him.

By the way, if you genuinely don't have that much money right now then they can usually arrange a payment by installments.

If in victoria at the time of the driving offence, check with the authorities at:

Note that all official Australian government websites end in .gov.au

Check quickly, the consequences are listed on the website, and worsen for you.

For Victoria (my state) they have a process for "pausing" the process because of the covid mess or poverty. As long as you remain polite, you are likely to be able to get info over the phone. Have the infringement number ready as they would like that info first.

There is only a very small chance of error, which can be checked by looking at the photo which is freely available online.

The points on the licence is not such a problem, but the debt owed will never, never be forgotten. If OK with you, tell us what state this was. 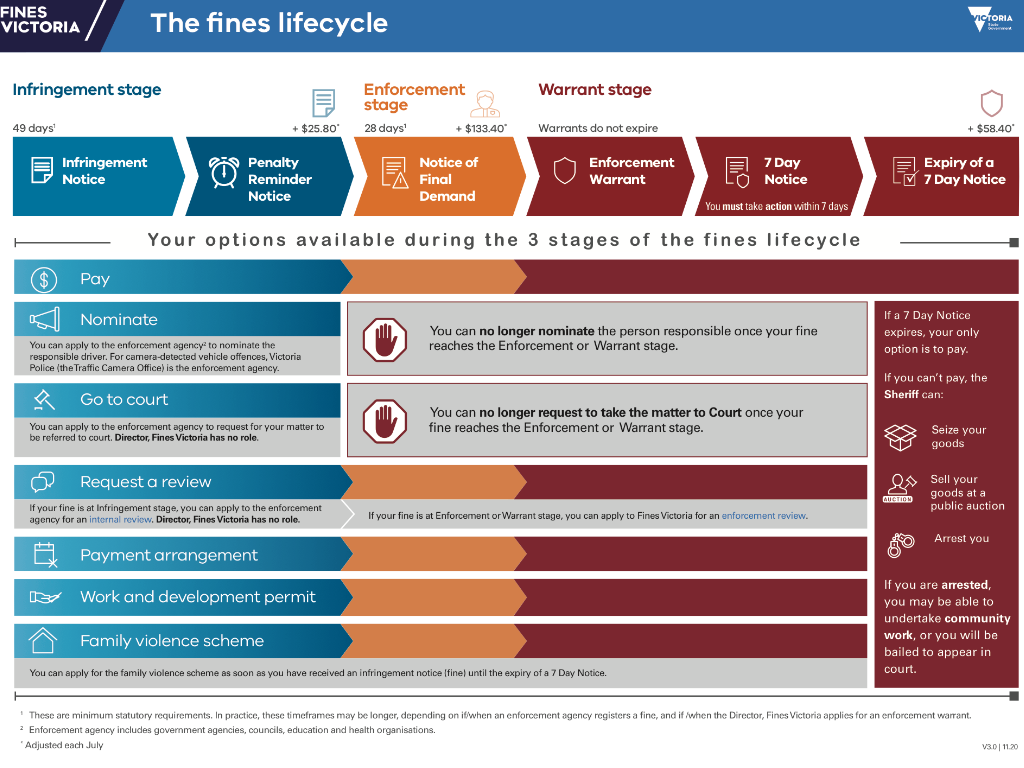 I believe that (some) Australian States & Territories will let you pay by instalments, atleast for residents. I would contact the authorities and ask if you can pay by instalment. If not, is your b/f in a position to pay the fine on your behalf, and then you can repay him (assuming this is legal)? Otherwise, can someone else lend you the money?

You have acknowledged that you did it.

It's a fair whack of money, but in the end of the day £250 plus the transfer fees is not so much that you'd be unable to borrow it.

Pay it and get rid of the problem.

Not the answer you're looking for? Browse other questions tagged legal australia automobiles fines or ask your own question.

44
Car rental vs. buying a car for 1 month, when visiting the USA?
13
Getting to Australia from overseas cheaply and not by air?
6
What limitations are there on my 4 month old UK driving licence for use travelling across Australia?
8
How to report hotel booking fraud?
30
Any trouble at Florida customs for not paying a California speeding ticket from 5 years ago?
39
What does this road sign mean? (Germany; red circle and X on a blue background, with a right-pointing arrow.)
10
Gasoline beggars in and around Los Angeles — scam?