Are my scuba fins likely to be acceptable "personal items" for air travel?

In January I will be traveling to Belize for a week, and intend to do a fair bit of scuba diving. For that, I'd like to bring my 26" fins, and ideally, I'd like to avoid checking a bag, so I don't have to worry about losing it. However, Delta's carry-on limit is 22" in the longest dimension. Their limits for personal items are much vaguer though. One example given is umbrellas, some of which are considerably more pointy and unwieldy than scuba fins.

If I don't mind holding them the whole way, are my 26" likely to be considered "personal items"?

To clarify, I am only asking about fins and not any other gear because they are the only piece of my gear that I need to bring that is above 22"

Decisions about carry-on items are judgements made by airline employees at the gate, so it's hard to give a firm answer. It's possible that someone lets it slide or doesn't notice (though a pair of 26" fins is pretty conspicuous).

But you asked what is likely, and I would say no: 26" fins are not likely to be considered a personal item. As you noted, the carry on limit is 22". Personal items are expected to be small items that can be stored beneath the seat in front of you and not held (I am not sure how you would hold 26" fins during a flight either). A personal item that is larger than even the maximum carry-on bag size seems unlikely to be permitted; if they won't let you carry on a 26" suitcase, why would they let you carry on both a 22" suitcase and 26" fins?

For what it's worth, I'll add a dissenting opinion. I've flown Delta for years with many oddly shaped items as carry-ons including: scuba fins, skateboards, longboards, collapsing hiking poles, climbing helmets, sombreros, kites. I travel a lot for outdoor sports and I've never once had an issue with bringing something through security or on board the plane. I do get some odd looks and questions though!

Of course, you should always be prepared for them to point to the rules about the dimensions. But items that are flat in one dimension are a lot easier to get waived, since the purpose of the rules is for the 26" length of a suitcase to fit head-on in the overhead compartment.

Is 26" the total length? In theory, you can just fit 26" on the diagonal of a 22"x14" rectangle...that assumes a thin line, but maybe your fins have enough squish that you could actually get them into the carry-on size (or have a slight bulge in your bag that can be plausibly squished down).

Having everything unambiguously fit into your carry on would be the ideal situation, or putting your fins into your carry on and removing some other item(s) of the same volume but that could be put into a bag that is more clearly a personal item.

Otherwise, be prepared to check them if you have to--figure out in advance how you will package them for that. Consider that you possibly won't find out until the plane is boarding, so it needs to be something you can do fairly quickly.

I have tried this and had approximately as much success as I had failures. My latest 50-50 success-failure story was a few years back, when I flew from Australia to Fiji. I had my freediving fins (Mares Razor Pro with blade length estimated at 38'') with me. I had no problem on the way down. On the way back, the staff at security checks were unhappy with the item and sent me back to check-in. All I did was remove the blade from the foot pocket, place the blade in hold luggage and I kept the pockets as my personal item of carry-on. 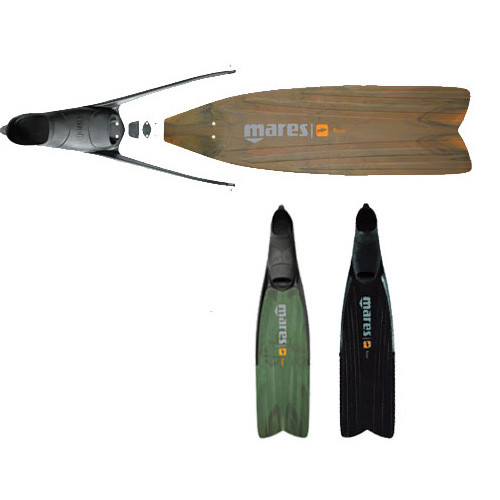 So this is my advice if all else fails: choose fins whose foot pocket can be detached and split blade and pocket in case the airline/airport security complains about the total length of the item. Once split you can place the blades on top of each other and slide them in your backpack. They will stick out of the backpack but will be more inconspicuous. The same you can do with the foot pockets. OR you can place them in a plastic bag, and hang that from your backpack, which is exactly what I did.

Typically airline employees have some leeway and they will make a decision based on the aircraft used and how full the flight is. So, there may not be a unique answer. If the flight is relatively empty and you fly on a large aircraft, it is probably possible, but on a full flight they may be questioning you more.

Not the answer you're looking for? Browse other questions tagged air-travel luggage airport-security diving or ask your own question.

12
How to protect glass and ceramic items for air travel?
8
Are bus tickets acceptable for Air Asia as a proof of onward travel?
31
Why would I want a hard-shell suitcase (for air travel)?
9
Delta carry-on policy
3
Airline (Air Caraibes) refuses to compensate for baggage delay - what are my options?
4
Are soft copies of ID proof acceptable for domestic air travel in India?
17
Are magnets still a problem as luggage on air travel?