Are souvenir ink stamps at tourist attractions popular in the USA?

During my holidays with my parents (as a child), especially in Polish/Czech/Slovak mountains, we were collecting ink stamps from tourist attractions, mountain shelters, national park entrances. These stamps work as a souvenir or as a confirmation that you have visited that location. They seem to be pretty popular in Poland even nowadays, as every museum, gallery, tourist office has at least one. Therefore, me and my wife started collecting ink stamps from locations visited during holidays in a special notebook. We have managed to collect some in Slovakia, Czechia, Ukraine, Italy, or even in San Marino.

Either by not knowing the exact English name, or because of lack of such ink stamps, I cannot find any information whether these exist in the USA. After the COVID pandemic we plan to visit the USA (either the South West or the East Coast - yes, a Fallout 3/NV fan indeed).

Do such souvenir ink stamps exist in the USA, in what kind of locations are they available (national parks, shelters, museum, tourist offices, post offices?), and how are they called exactly?

As I need to be precise, I limit the question to the USA, but if you have such a knowledge about any other, especially non-European country, do not hesitate to answer in a comment :)

I attach one of pages from our notebook below. 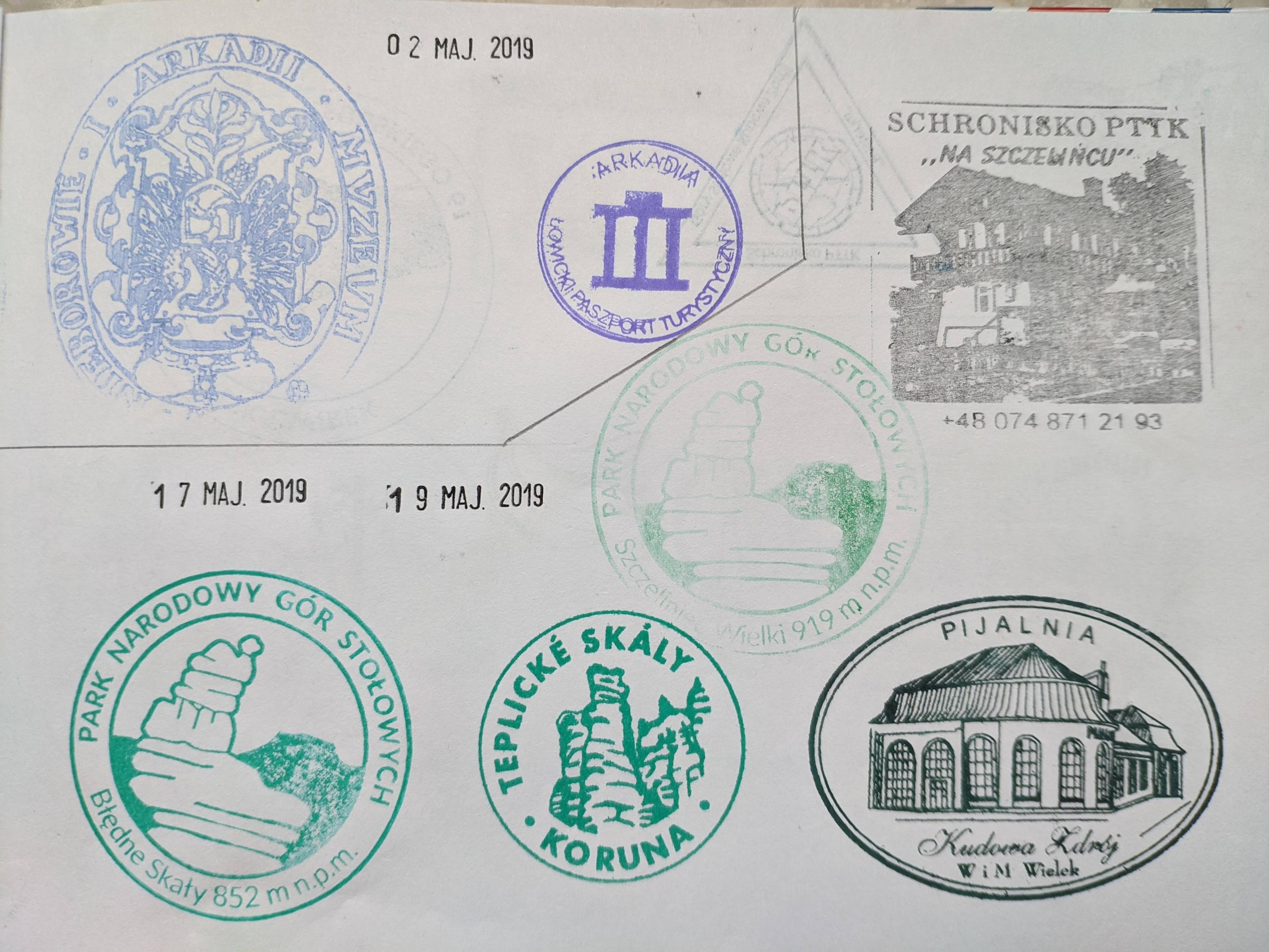 I would not say they are popular, but you can get what might loosely be termed "souvenir passport" stamps, because they are commonly provided as part of a promotion which uses the conceit of a passport to record visits. By the same token, not every promotion or package billed as a "passport" involves any physical stamps, however, and some programs now only offer electronic stamps.

The most popular souvenir passport programs, I would surmise, are the National Park Passport (officially the Passport To Your National Parks®, but no one calls it that), and the Major League Baseball Pass-Port. In both cases, you can obtain a stamp from the location you visit for no additional cost beyond admission, and regardless of whether you are enrolled in the visitor program or using their "official" booklet. The stamp and inkpad are commonly available at a counter, and you stamp your own. At a minor league ballpark, you may need to ask more than one person where to go.

A more obscure program known as the Blue Goose Passport is sponsored by the U.S. Fish and Wildlife Service, if you are visiting locations within the National Wildlife Refuge System. Again, I find it very unlikely anyone will notice or care if you do not use the official booklet.

There is also the Appalachian Trail Passport, aimed at hikers who want to keep a stamp book as a memento of their trek. Unlike the previously mentioned programs, the stamping locations are mostly private businesses, where at least a token purchase might be polite.

Beyond this, there are various local or regional promotions which may be organized as a "passport" program. Kentucky offers stamps on its Bourbon Trail and New Jersey at some of its wineries, for example.

As a last option you could try for a postmark from the local U.S. post office. You could purchase a stamp and ask them to cancel it in your notebook to collect the local postmark as a souvenir. This is likely to be an unusual request at the vast majority of post offices, so good luck if you want to try.

At nearly all of the 421 American National Park units of the United States (and many of the National Park Service's affiliated areas), one or more National Park Passport Stamps (cancellation stamps) can be acquired at no cost at park visitor centers and ranger stations. The stamps are similar in nature to passport stamps stamped in a traveler's national passport. The stamps serve as a record of each park visit.

Here is one example program:

Get Your National Park Passport Stamped at Minuteman Missile

The Passport program was started by Eastern National Parks Association in 1986 and was established to help visitors discover the beauty and history found in America’s national parks. Cancellation stamps can be found at national parks and monuments. These rubber-stamp ink markings record the name of the park and the date of your visit.

There are "passport books" available to collect the stamps in, and here is an example stamp:

Not the answer you're looking for? Browse other questions tagged usa souvenirs or ask your own question.

8
What are the must-buy souvenirs from Ireland?
51
Can a tourist buy a gun in the USA?
5
Tourist speeding fine in USA
1
Tourist - USA-Canada-USA in a few days
2
What is the cheapest/safest way to ship a box to Japan from USA
1
Reentering USA from Mexico with Tourist Visa
38
Can I legally take washed up coral from Mexico to the USA?
2
Crossing the Mexican/US border with USA tourist visa
63
Can a tourist shoot a gun in the USA?
17
Are there luxury tourist train excursions in the USA?