Why does a flight from Melbourne to Cape Town need to go via Doha?

Looking at tickets for, say, a flight from Melbourne (MEL) to Cape Town (CPT) I found none without an airport stop - i.e. at Doha (DOH).

I understand that the "direct" route (great circle) is perhaps too close to the southern pole, but what is the reason to make such a long route?

The ideal paths are:

while the direct route is:

The half of the distance! Even if you don't follow the great circle (for the reason above) the "single hop" route will be very close to the first part of the trip (MEL-DOH).

A second thought might be about the lands below: of course MEL-DOH-CPT is for most of the path above lands. But as I learn here it is not unusual to have long paths over the seas.

So, what are the reasons to avoid the shortest path in this example?

It's not just a stop, it's a change (picking a random date a couple of week in the future you'd be in Doha for about 23 hours). This is how airlines operate - they serve multiple routes form one or more bases or hubs (at which maintenance and many other services may be concentrated). In Qatar's case their base is Doha. So they fly from Doha to anywhere they can make a profit, e.g. MEL and CPT (other airlines use Hong Kong or Dubai for this connection).

Qantas use Melbourne as a base, so it wouldn't be too hard for them to fly to Cape Town - or for South African Airways to do the same (Cape Town is a hub for them). The fact that neither do suggests they don't think they could sell enough seats to make money on the route, as there are unlikely to be regulatory hurdles that completely block this route.

There is already a very good and accepted answer, so mine is just for added fun.

A very interesting way to visualize this is www.flightconnections.com. It's an interactive map that shows all regularly scheduled direct flights. If you click on Capetown, you can see that nothing goes to Australia and the farthest west you can get is Hong Kong.

Now why is that?

Almost all airlines operate a "hub and spoke" system. That means their is one (or a few) "central" airport that's home to the airline and that serves individual flights to all other destinations. So almost all routes from A B to will have a layover at a hub, so you fly A->Hub->B (unless A or B are a Hub itself). The reason for that is easy: it allows the airline to serve a large numbers of city combination with relatively small number of direct flights. If you want to serve 100 cities with all possible combinations you would need 4950 different flights. With a hub and spoke system you only need 99. The hub also allows the airline to put all infrastructure in a single location since every plane shows up at the hub after every second flight.

Going back to your specific example. Neither Capetown nor Melbourne are hubs, so you would need an airline that has a different hub and serves both airports. Again, flightconnections.com can easily illustrate that if you put in both airports. Turns out the only airlines that do this are Emirates (Dubai), Qatar (Doha) and Cathay Pacific (Hong Kong). So these are your only choices with a single layover.

It tends to be easier if you use a hub "in region", but unfortunately South African (Johannesburg) doesn't serve Melbourne and Qantas (Sydney) doesn't serve Cape Town.

Side note: Looking at the map also explains why some relatively small middle eastern countries have massively large airlines (Emirates, Qatar, Etihad, ..) It's basic geography: with a hub in the middle east, you can connect all continents and the vast majority of the major cities in the world with a single layover. Emirates for example only operates the largest planes: Boeing 777 and Airbus A380. Only a tiny fraction of their passengers are actually traveling from/to Dubai.

The economics of hub and spoke matter, but also the distance over open ocean matters. For the entire route from Melbourne to Doha to Cape Town there are other airports to land at in the event of an emergency. But for a direct flight from Australia to Cape Town there's nothing. There's only one uninhabited mountainous island with no airport. Shipping traffic doesn’t even go through there. It is very isolated. If a flight over that part of the world needs to come down it will have to ditch and rescuers will take weeks to arrive.

The question is a bit nonsensical.

The answer to "Why do you have to go through another airport" is simply "there's no direct flight."

When you want to fly to (say) Cape Town, the first thing you do is simply bring up a map of all the direct flights of Cape Town: 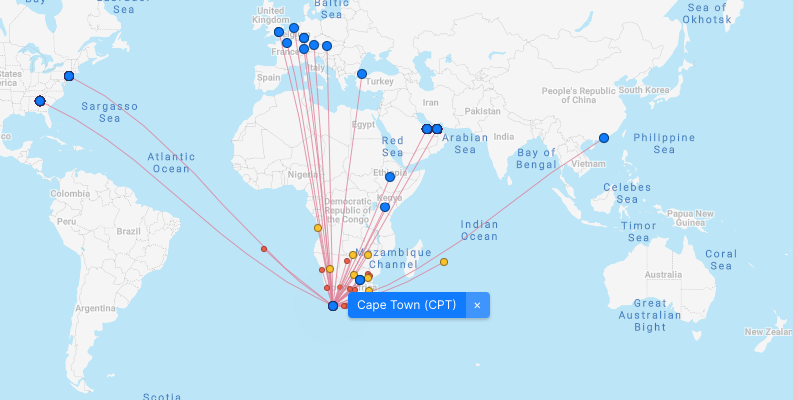 As you can instantly see your easiest choices are HK, Dubai or Doha.

Not the answer you're looking for? Browse other questions tagged air-travel connecting-flights or ask your own question.

9
Why does connecting flight need a security check at connection airport?
6
Could a ticket from London to Cape Town cost the same in 2016 as it did in 1976?
7
How is it possible that an indirect flight is shorter than a direct one?
3
Rechecking bags at customs on international flight from Heathrow to Toronto via Washington
2
Flight from Singapore to Kochi via Bangalore, where will we need to do customs and reclaim our baggage?
4
Flying from Cape Town to England and return to another province