Is organised convoy driving behind a snowplough common anywhere outside Norway? [closed]

Ask Question
Asked 6 years, 10 months ago
Viewed 768 times
7
Closed. This question is off-topic. It is not currently accepting answers.

Last Sunday I was driving on the European route E10 and we had to pass the Bjørnfjell pass at the border between Norway and Sweden. In principle the Bjørnfjell road is open all year, but may be closed due to bad weather, as reported by vegvesen.no on the Norwegian side and trafikverket.se on the Swedish side. This was the sight at we approached the road: 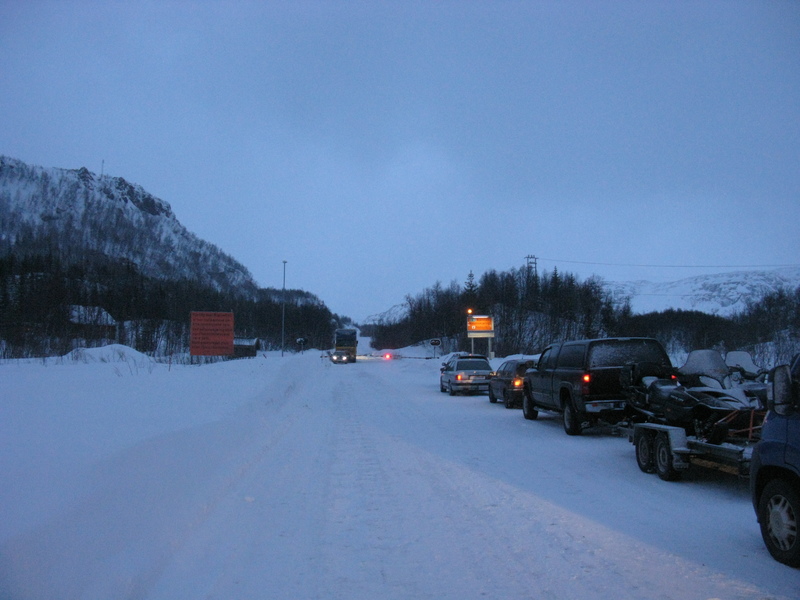 Now, it looks like the road is closed. However, the Norwegian road authority in this case chooses a hybrid between closing and opening the road, a hybrid that does not exist in Sweden: kolonnekjøring or organised convoy driving. In a nutshell, this means that the snowplough drives back and forth over the part of the road that may be closed, and the cars drive slowly in a convoy behind the snowplough. As soon as the last car has passed, the road is closed again, until the next round (I think there is a car from the traffic agency following the last car for safety reasons). See also this youtube clip.

For most roads this occurs as necessary and there is no exact timetable. In Finnmark, however, convoy driving happens according to a timetable per road, a timetable that is adapted to times for ferries, schools, church services, etc.

Does such scheduled or unscheduled convoy driving, as a compromise between closing a road due to bad weather or keeping it open, exist anywhere outside Norway?

Browse other questions tagged driving winter snow or ask your own question.

4
Driving from Zurich to Milan in the winter
8
What is the driving time in a car from Zamyn-Uud to Ulaanbaatar?
2
Driving in the winter (Dec-Jan) from Ohio to California
5
Road conditions on Eastern USA/Canada roads in Winter
3
A complete set of driving rules in Norway
2
How to visit Colorado mountains during the winter without driving through unsafe road conditions to get to the transit service?
1
Road trip to Tromsø (polar circle) in late May: what tires?
2
Salt Lake City driving in winter
11
Travel insurance for potential snowy weather when driving using a rental