I want to go to Rhine Falls from the airport and return to Zurich on the same day. In Zurich, I want to reach the Technopark to be exact.

I am looking for the best and cheapest route to do a round trip to and from Rhine Falls and then reach Technopark (inter-city travel). On Sunday, I will have to go back to the airport form there.

Which tickets/pass should I buy?

As for the ticket you can get a 9 o'clock day pass at the ticket machine at the station in the Airport (the machines are on the floor above the rails). It is valid on all trains, busses and trams within the ZVV area until 5am the next morning. If you take one of the special night busses/trains running after midnight you need to get an night supplement for CHF 5 (from a ticket machine, you can't buy the supplement in the bus/train).

For the route you want to travel from "Zürich Flughafen" to "Schloss Laufen, Rheinfall". There are several connections per hour, use ZVV Connections to find the one which suits your arrival. Just make sure you get a connection via Winterthur (the website will also list connections via Bülach and Schaffhausen which isn't covered by the 9 o'clock pass).

The station is right on top of the fall, you will have to walk about 60m down to get to the ferry running between both sides of the river and the little island/rock in the middle of the fall. 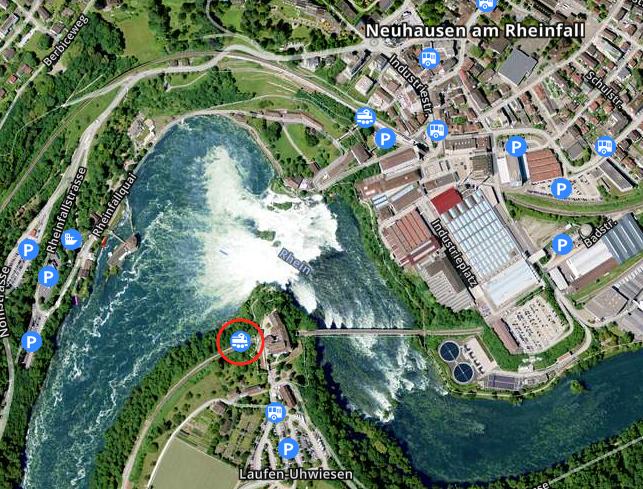 For the trip back, you can either take the train to "Zürich, Hardbrücke" and walk a few minutes, or the train to Zurich and the tram to "Zürich, Technopark". Just make sure you take a route running via "Winterthur", the ones via "Bülach" aren't covered by the day pass.

PS: Please be aware that wearing a mask is currently mandatory in all public transport in Switzerland.

PPS: For the trip on Sunday, just get a one-way ticket to the airport (three zones) at the ticket machine where you get into the tram/train.

PPPS: If you don't want to worry about finding ticket machines etc you could also use the ZVV App to get the pass and individual tickets.

1
Where to find routes and times of public transportation in Croatia?
5
Train Route from CDG to Calais
7
Getting around the Wengen/Grindelwald/Jungfrau region
3
Eurail Two country Pass - Is it valid for travel within city transport?
8
Accessing Karlsruhe from a major airport
1
Conflicting answers about Transiting Zurich International Airport