I would like to get to this island, marked by a red marker (on Google Maps): 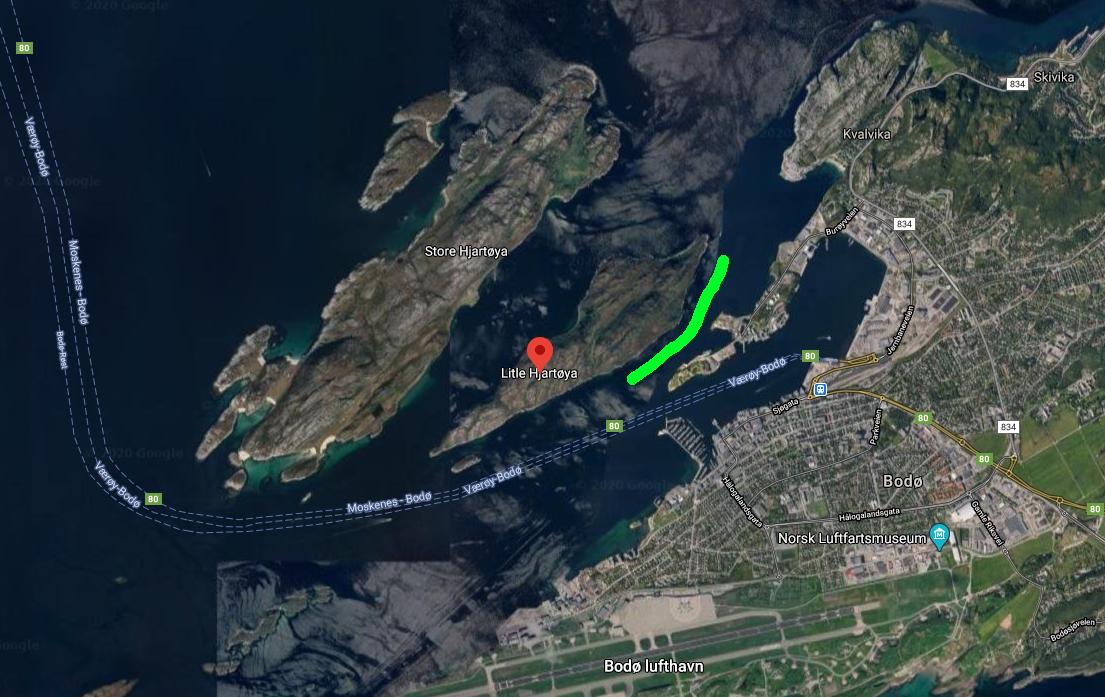 The obvious route would be to swim across the strait marked by the green stripe. Distance is not that big, ~270m, I can swim that much. 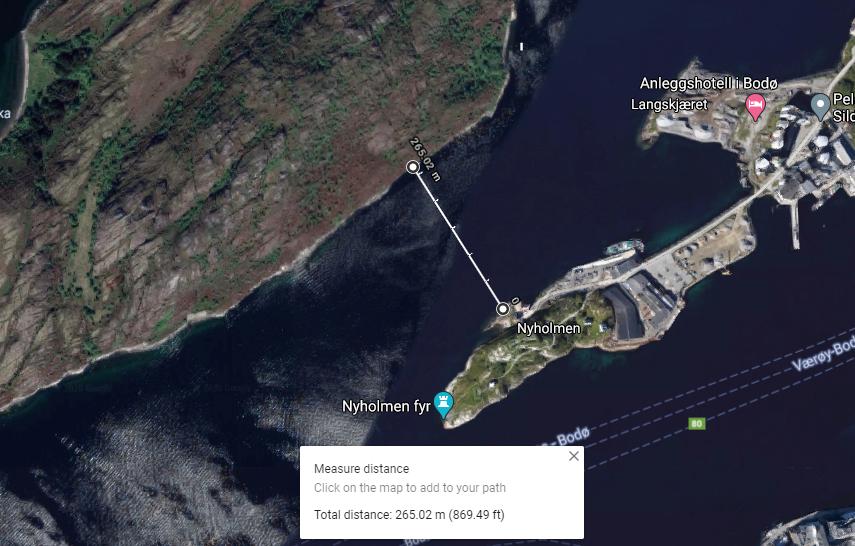 (I know there is a shorter distance between Langskjæret and the island, though I cannot go to Langskjæret, as it is a construction site, so entry is forbidden.)

Can I swim there without taking unreasonable risk or breaking Norwegian law (or other rules I am supposed to follow)?

Update: thanks for everyone who has contributed. Based on the answers & my love for my life, I will not swim there.

This looks to be a somewhat foolhardy idea. Aside from the legality (Tor-Einar Jarnbjo thinks it's legal) there are some practical considerations:

My thoughts: If you really need to visit a small rocky uninhabited island just off the Norwegian coast, take a boat.

Having worked as a boat pilot for a dive center, I have to agree with @Arthur's Pass answer. You must understand that is is really hard to spot someone swimming in the water, you will be hidden behind any small wave. Also, the bigger the boat, the less the pilot looks out for things like swimmers, especially in an area where there is usually no swimmers.

Again, as said Arthur, the might not be able to avoid you. The bigger the ship, the harder it is to maneuver precisely.

I have to strongly recommend you not to take that swim. Remember boats have propellers under their hull that can shred you down to pieces.

Just chiming in as a local that the area is frequented by not just ships with professional equipment and captained by professionals but also by many locals out for a quick fishing trip, leisurely drive, or, in rare cases, quick trips using small fast craft. These are unlikely to notice a single swimmer with no marker.

(As an aside, the sides of Litle Hjartøya are in many places too steep to get out of the water without climbing. I can't recall this exact area, but I believe most of that side of the island is sheer rock.)

A much more sensible option would be to rent a small boat in Bodø, or to charter someone to take you there and back again. If you have some time you could advertise in the regional newspaper, or if you are in the region I would simply ask around the harbour.

If you're instead looking for a swimming challenge there are plenty of beautiful areas with or without small islands in the vicinity:

Another option would be to take the "hurtigbåten" to any of several islands nearby.

I cannot answer all points for you, but as I kayak frequently on bodies of water used by ships (also sometimes in narrow ship channels or in places like the Lorelei), here are some points to think about. They stay the same for both swimmers and small boats, so they are relevant even if you decide to rent a kayak or canoe. And one specifically for swimmers: due to the way the water moves, you will spend more energy to cover the same distance in running water than in a pool, reducing your effective radius.

It is certain that they will not see you. A cargo ship of the river type is huge, an ocean going one is humungous. The first deck is several stories above the water, the captain's booth is at the highest point far in the back, and the ship body spans a long distance before the booth. This means that, when the captain looks out of the booth, he cannot see anything a few hundred meters in front of the ship, because it is in the ship's own "shadow". 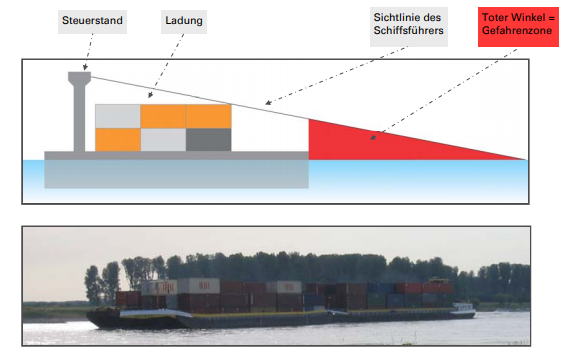 For river ships, this "shadow" is several hundred meters long. You are hidden from view long before your head becomes large enough to be seen.

But the even bigger problem: avoiding being hurt by a ship is very different from avoiding being hurt by a car. One danger is being run over - this is almost impossible for a single-unit ship, but apparently can happen with a tug-and-barge combination. With the "standard" ship, what happens is that you pass it at what you thought is a safe distance - and then you get sucked by its stern current and into the house-sized propellers. If you avoid this, you can get caught in the waves following the ship - it can happen that a 1000 ton wave throws you right onto a spur dyke (I've heard that this causes several injuries each year on the Rhine).

I don't know what it is like in the area there, but note that small "fun" boats might be worse than the very large ships. The size of the waves depends not on the size of the boat, it depends on its speed - if you get passed by a 60 kmh boat (and if it is loaded with boys showing off to shrieking girls, you can only hope it will pass you) you will be bobbing on some high waves long after it's gone.

Somebody wrote that this area is a port. Around a port entrance, you have two currents meeting, and there are many structures built underwater. This creates quite weird currents right where you wouldn't expect them, and makes it very dangerous to enter the port as a swimmer. I have seen newbies in kayaks capsize in smaller currents.

Also, it might be that even where swimming in a given body of water is legal, swimming through a port entrance is illegal, so make sure if there are ordinances about that. Also, you might go there and see a large sign telling you that the port is private and only allows entry of ships scheduled to land there - in that case, technically even entering with a kayak will be an offense.

As mentioned in other answers, it is an important thing to consider. Somebody commented that people can train to spend time in very cold water, but without such training, hypothermia is a very real risk. The safety rule I have been taught is:

If you fall into water below 15 C, you have about as many minutes as the temperature until you become incapacitated.

"Incapacitated" here means that you won't be able to move in a coordinated fashion and will need a rescuer even for something as easy as climbing onto a boat or raft. If you read German, you can see details here.

So take care, either as a swimmer or as a paddler - if you have never paddled before and cannot read currents and/or have never passed ships, take an experienced buddy with you.

In downtown Bodø, a couple of hundred meters away from your planned swim, is Bodø Radio, one of the headquarters of the Maritime Radio (contact page).

They may be able to assist you in several ways:

Not sure they will be thrilled about this project, but they will definitely like to be told in the case were you decide to go ahead with the idea anyway.

To add to the "bad idea" suggestions, I looked up the traffic density on marinetraffic.com and got this result (unfortunately the highest zoom at which it draws the density maps): 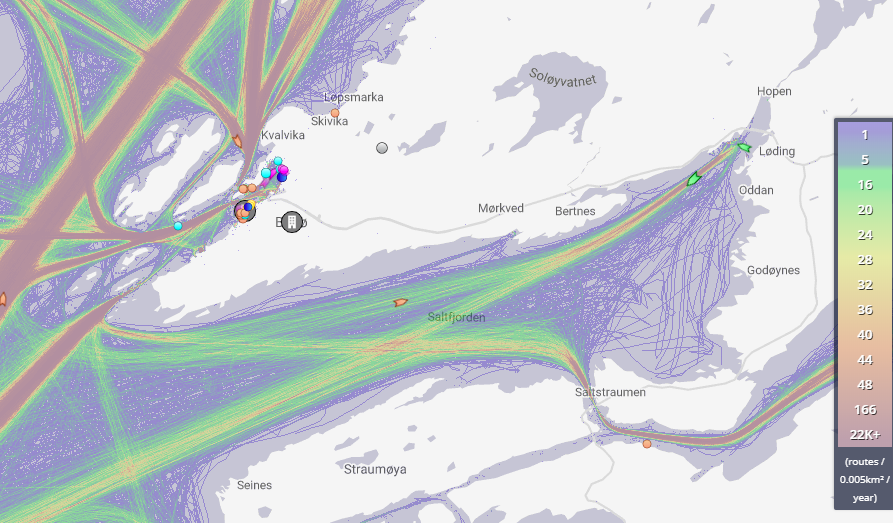 Converting the units of the red areas to ships per 0.005 sq km per hour (crudely dividing by hours in a year) gives about 2.5 ships per 70 x 70 metre square per hour, which will be an underestimate for multiple reasons: small boats used by locals aren't counted, and presumably you'll be doing this during daylight and the ship density will be higher then.

It's probably too far away to be relevant, but note that the airport there shares facilities with an active military airbase, so the authorities might be a little more stringent on people doing relatively unusual things to get places which people don't usually go.

Not the answer you're looking for? Browse other questions tagged legal norway islands swimming ships or ask your own question.

19
Can I import honey to Norway?
12
Can I import homebrewed alcohol to Norway?
9
Where can I swim in the Soča valley?
9
Where can I swim with bioluminescent plankton in Phuket?
4
Is there anywhere near central Osaka where I can swim for free?
21
Can people smoke on their balconies in Norway?
1
Back to mainland Norway from Svalbard
4
How can I know which lakes are okay for bathing in Norway?