Where is this tower, likely photographed in Belgium about 100 years ago?

This photograph is labelled as "restoration of a Belgian tower" and taken between 1920 and 1930, although both pieces of information might be wrong. However, it must have been taken before 1935 because the photographer died in that year and that piece of metadata is likely to be correct.

I'm trying to find out what tower is it and its location. I've tried checking images of Belgian towers to no avail - maybe I haven't tried hard enough.

The image can also be seen in Wikimedia Commons at https://commons.wikimedia.org/wiki/File:Restauraci%C3%B3_d%E2%80%99una_torre_medieval_en_una_ciutat_belga.jpeg and in its original location at http://mdc.csuc.cat/cdm/singleitem/collection/ffmgausachs/id/171/rec/284 with some metadata.

A bit of context:

Some thousands of old public domain images were recently imported from a Catalan archive to Wikimedia Commons. Most of them were properly identified but there is a big lot with lacking or wrong information - that's the reason I wrote that the location and date should be taken with a grain of salt. Thanks to a very dedicated Catalan Wikipedia editor and some crowd-sourced expertise, identification of those advances fairly well. However, some of the images - like this one - were taken in other places of Europe far away from Catalonia and I think that identifying landmarks on them will be easier for a more international audience. Since it's a voyage photograph (although the voyager passed away in 1935) I think it's on topic here, a good addition to the site and an interesting challenge for some users, while providing a valuable little piece of information for the benefit of common humankind knowledge by allowing the image to be properly identified in Wikimedia Commons.

This is not in Belgium, but in Béthune, France, although not far from the Belgian border.

The belfry (the tower) is originally from 1346, but was destroyed during the first world war and rebuilt between 1921 and 1923. You can find it on Google Streetview from almost the same point as your photographs have been taken. 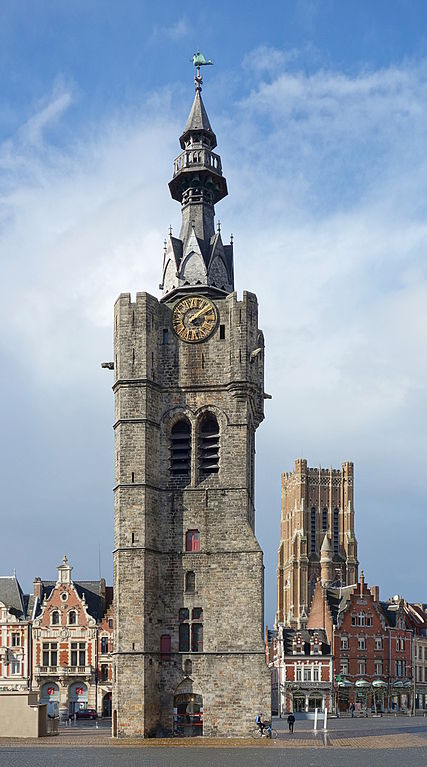 Not the answer you're looking for? Browse other questions tagged france identify-this where-on-earth history landmarks or ask your own question.

40
Is this image, taken about 1900, actually from Nuremberg?
29
Identifying a Romanesque church in France from a 1900s photo
19
Where is this chained man statue, photographed a century ago?

40
Where this picture was taken ~100 years ago?
18
Emotive Sculpture in a Port - Where Is It?
4
What is the location of this 19th century photo of the Andes?
38
Where is this tower?
40
Is this image, taken about 1900, actually from Nuremberg?
29
Identifying a Romanesque church in France from a 1900s photo
42
Identifying a church by a lake and a railway line, claimed to be in the Canton of Lucerne
19
Where is this chained man statue, photographed a century ago?
27
Photograph allegedly from Barcelona in 1987