What exactly was/is the difference between "Disney World" and "Disneyland"? [closed]

And what's with the inconsistent naming? Why isn't it "Disney Land" or "Disneyworld"?

I've numerous times consulted Wikipedia to try to straighten this out, but always come back even more confused than I was before.

The big difference is the scale.

Disneyland (in California) was the first theme park Walt Disney built. Originally consisting of one theme park and one hotel, though after Walt's death it was expanded into a resort with a second theme park, more hotels and some other attractions.

Disney world (in Florida) was a much bigger project, this time Walt Disney wanted to control not just the immediate theme park but the whole area surrounding it. While sadly Walt died before the park was actually built the result was nevertheless a Disney-controlled resort with four theme parks, two water parks and loads of hotels and other attractions.

There are also a number of foreign (outside the US) Disneylands. As far as I can tell these are much closer in scale to the original Disneyland than they are to Disney World.

The difference is that Disneyland is in California and Disney World is in Florida.

I suppose the idea was that they would not be confused.

DISCLAIMER: Read OP carefully. Also, SE does not require every answer to be all-inclusive.

Reading your question carefully, I’m not sure you’re asking about the easy stuff like location, scale or features. You seem to be asking a lot about the etymology: the word crafting.*

Historically there are reasons** many country/state names end in “land”: Ireland, Scotland, England, Rhineland, Poland, etc. The style has been used for fictional/created non-countries too: wonderland, playland, etc. Disneyland is simply continuing that style.

Different deal with the Florida resort. They wanted it named after Walt Disney, i.e. the full name. Waltdisneyworld would be a very ugly word formation. So they went with “Walt Disney World”.

* And since others have covered the scale, features and location well, there is no point in re-treading their work; and SE rules do not encourage or require that.

** Some very smart people want me to delve into the etymology of that; but that’s not your question.

Map from Wikipedia with the different names by location:

In the USA, Disneyland is the name of Disney's property in Anaheim, California.

Originally, Disneyland was a single theme park, and still is. It has various versions around the world, but I imagine here we're talking about the Disneyland theme park in California.

Confusingly, since opening, Disney has also opened another theme park (Disney's California Adventure), a shopping area, and hotels around the original Disneyland park. The overall resort here is called the Disneyland Resort.

Walt Disney World, on the other hand, is Disney's resort in Florida. This is far, far larger than the Disneyland Resort and contains far more - more parks, hotels, shopping, and areas to expand into.

Walt Disney World contains the Magic Kingdom, Florida's version of the Disneyland theme park. However, in my experience, a lot of people call this park "Disney World", which is where I believe a lot of confusion stems from.

Most likely to play off Disney's fame (he was a prolific film and TV producer by then), as well as matching the motif of the park. Remember, the parks have always focused on the Disney stories. This is how Disneyland opened in 1955 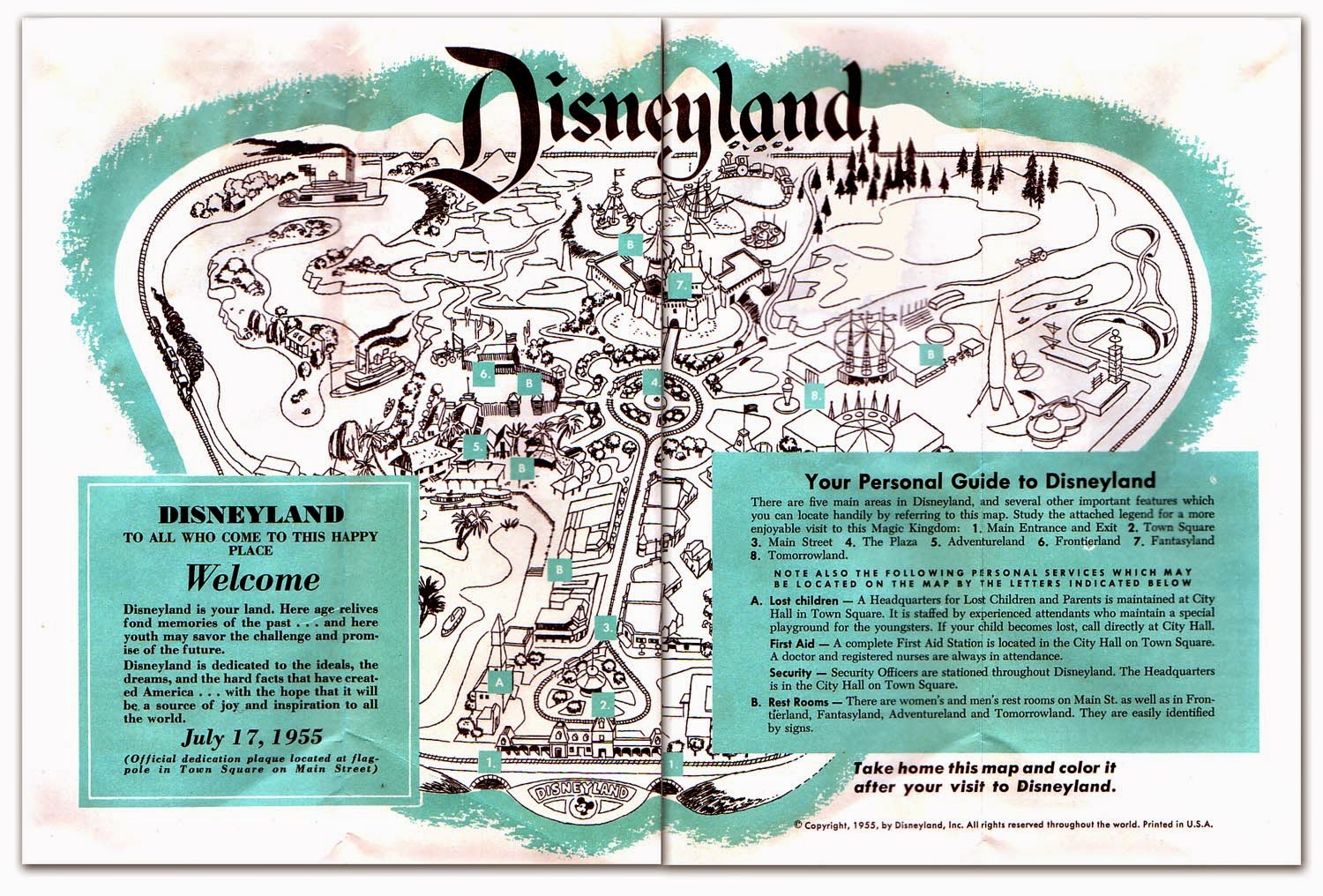 Note how the various areas are named. In particular

Notice a motif? And to top it off, Walt Disney started a Disney anthology series that started in and around the park.

Announced in 1966, Walt Disney would die that same year. There's no reason why Disney called it "Disney World", but it's far less common to use "world" as a suffix. But it was Roy Disney who named the whole resort after the man

One of his first decisions was that the Disneyworld project would be officially renamed “Walt Disney World.” Roy was insistent that people be reminded that this was Walt’s project. Very few others in the company agreed with that choice because of marketing reasons.

In a meeting, someone referred to it as “Disneyworld” and Roy’s hand went to his glasses as he focused on the offending word: “I’m only going to say this one more time. I want it called ‘Walt Disney World.’ Not Disneyworld, not Disneyland East, not anything else. Walt Disney World.”

Not the answer you're looking for? Browse other questions tagged usa europe disney or ask your own question.

20
What is the best time of year to go to Disney World to avoid crowds?
3
What public transport options are there between Universal Studios and Disney World?
12
What exactly are the differences between a National Park and a National Forest?
5
Is the tapwater at Walt Disney World fluoridated?
2
VWP vs. obtaining a visa for the US
6
Which visa for post-graduate observership in US?
22
Web Sites: Disneyland vs Disney World in the United States
1
What park has the most rides: Disneyland Park or Disney California Adventure Park in the US?
8
Do I have to buy a Disney world dining plan for the whole stay?