What rights do airlines have to deny boarding due to immigration issues? [duplicate]

So I just stumbled across this account of a traveller which I can imagine to be pretty distressing because I myself have had a rather close call not too long ago. I was travelling from Singapore travelling to Switzerland (to which I can travel visa-free) and a recent relaxation of regulation allows me to apply for a residency permit only after landing in Switzerland, instead of having to apply at the Swiss embassy in Singapore. Thus I travelled to the airport without any visa and the airline did not want to let me board because I did not have a swiss residency permit on hand (yet) or a return ticket. However I insisted that based on my own research I shouldn't already need a residency permit to enter the country, but the airline was firm on their stance. I argued with the manager for a while and eventually they let me board after I provided enough evidence that I had sufficient reason to be living in Switzerland and as a result I almost missed my flight.

My question is, to what extent do airlines have the right to reject people from boarding due to immigration issues at the destination country? My logic is that even if I landed in Switzerland without a residency permit and don't manage to acquire the necessary documents then, it should be the responsibility of the Swiss immigrations to kick me out of their country, and not the airline's (which isn't even swiss airlines)?

Anyway, it turned out in the end that I acquired my residence documents successfully in the country, so the airline would have done me a great disservice had they successfully barred me from boarding the plane.

Airlines, in general, have an absolute right to deny boarding. But in the case of immigration issues, they frequently have an obligation to check whether passengers can be admitted to the destination. Many countries will levy fines on airlines who deliver a passenger to their border who is lacking required documents.

Every country implements this differently, but it is common practice that airlines must either take responsibility for removing the inadmissable passenger, at their own expense, or pay a fee or fine to the government if they're unable to do so.

In Switzerland, the law is as follows:

Air carriers transporting persons must take all reasonable measures to ensure that they only transport persons who possess the required travel documents, visas and residence documents to enter the Schengen area or to travel through international transit zones of the airports.

To give you an idea of what the airline agent is looking at in the airport, here's a Timatic web interface which United Airlines provide: 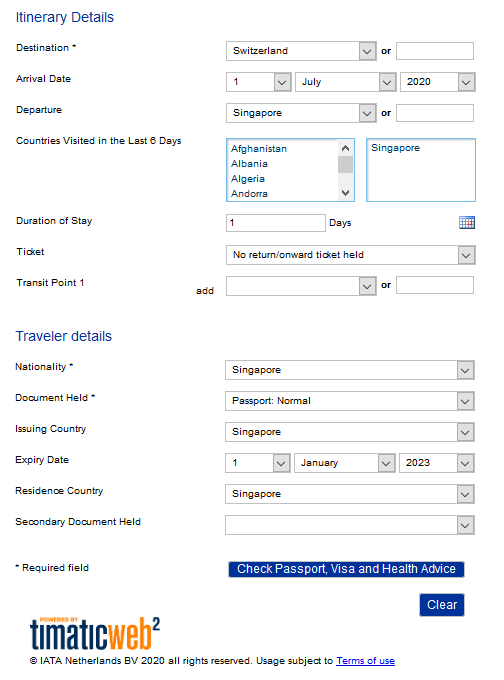 And once you click on the Check button, you will get: 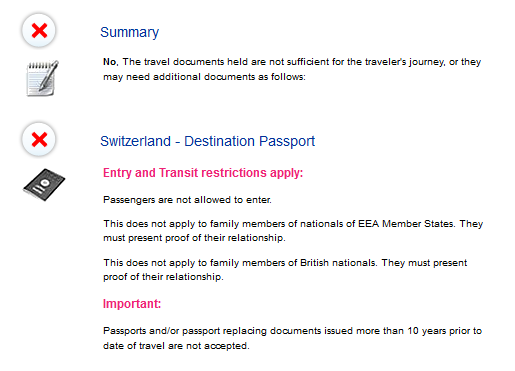 Note that if you change the "Ticket" field to "Return ticket held", the admission summary changes from "No" to "Conditional".

My question is, to what extent do airlines have the right to reject people from boarding due to immigration issues at the destination country?

They have all the rights. The airplane is their own private property. They don't need any justification to deny you boarding, they can allow or not allow anyone to enter their private property, as they please.

Yes, you did enter into a transportation contract with them, but the fine print in that contract will say something like this.

My logic is that even if I landed in Switzerland without a residency permit and don't manage to acquire the necessary documents then, it should be the responsibility of the Swiss immigrations to kick me out of their country, and not the airline's (which isn't even swiss airlines)?

That is not correct. According to international treaties, it is the responsibility of the airline to ensure that you will be admitted into the country. In case you are denied entry, the airline has to both pay a hefty fine and return you to the airport of origin at their cost. (Although note that the transportation contract with you will also specify that they will recover the fine and this cost from you.)

If you had been denied entry, the airline would have had to pay a fine on the order of 10000$, and fly you back. They then, in turn, would have charged you with 10000$ + the cost of the return ticket, and they would have been completely within their rights to do so.

Airline gate agents are not international immigration lawyers. They don't have the recent relaxations of all 41412 combinations of origin and destination countries memorized.

They rely on an automated system called Timatic which simply tells them "Yes" or "No". The information in Timatic is maintained based on information from the destination country. So, in this case, Switzerland has put into Timatic that entering without residency permit is not allowed, and that's the only information the gate agent has at their disposal.

I argued with the manager for a while and eventually they let me board after I provided enough evidence that I had sufficient reason to be living in Switzerland and as a result I almost missed my flight.

Moral of the story: Don't rely on gate agents being aware of every recent change in every immigration law of every country. Make life easy for them.

Even if you are right, arguing the fact that you are right may almost certainly take longer than the airplane is going to wait for you.

Not the answer you're looking for? Browse other questions tagged visas airlines or ask your own question.

21
How much would an airline be fined if the immigration officers of the destination country deny me entry?
30
If an airline erroneously refuses to check in a passenger on the grounds of incomplete paperwork (eg visa), is the passenger entitled to compensation?
20
I, a Russian citizen, was denied a flight from Alicante through London without a transit visa

6
What to do if denied boarding due to the airlines' fault?
5
Was it legal to restrict access to USA when holding a valid ESTA and visiting Canada for 6 months?
11
Can airlines deny boarding if my port of entry is different than the country which issued the Schengen visa?
21
Arriving in Zurich the night before Schengen visa validity begins
1
Travelling to Europe with expired h1b stamp
3
Is Schengen National Visa type D is same as Resident Permit?
2
Does a UK citizen need a visa to travel to and from the EU after Brexit?
20
I, a Russian citizen, was denied a flight from Alicante through London without a transit visa